By popular definition, I’m lazy. I work part time, I sleep a lot, I don’t do most of the exercise I probably should. I prefer reading on the couch to a Zumba class. I barely manage the mental effort required for mindfulness. And in collective consciousness, this means I have less worth.

The next time someone asks you what you’ve been up to, and even what you’re doing right now, try saying “nothing.” (Unless this is something you’ve already mastered, in which case, I bow to you).

Even the thought of it makes me break out in cold sweat. I can’t do it. Sometimes I will say “nothing of value,” or “not much,” even if I’ve been busy. My form of busy doesn’t always have capitalist value and therefore “nothing” feels true, but I still cannot bring myself to say it.

This is the next step in the posts I wrote about productivity last year. It’s not just about the requirement to be productive. If productivity is a sign of worth and results in cultural and social capital, the negative side of the coin is that non-productivity, or laziness, signals lack of worth.

Laziness as a stigma has a long history, rooted in Protestant work ethic, serfdom, and, of course, capitalism. It’s about far more than how we choose to spend our time. It’s about class warfare – the rich were – are – allowed to be lazy. So are white people. So are able people. These are generalizations, of course, but generally, the stigma against poor people, people of colour, disabled people, is higher than their peers. They are expected to be giving back to the society that is supposedly carrying them.

That constant compulsion to be active has made my illness all the harder to live with. I am perpetually terrified that people will see my lack of activity – both capitalist and social – as laziness. The word packs enough of a psychological punch to propel me into working beyond my capacity, saying yes to activities I don’t enjoy, and keeping moving even when I’m exhausted and in pain.

And why?  Because the thought of someone thinking I’m lazy makes me want to curl up and die.

Obviously, I’m far from alone. This morning, LinkedIn did something useful for once and dropped a New York Times article into my inbox. The Case For Doing Nothing leads off talking about the pitfalls of our constant busy-ness – high stress, insomnia, anxiety, lack of nutrition, less fulfilling relationships. Writer Olga Mecking, who lives in the Netherlands, makes a case for the cure.- doing nothing, or, as the Dutch call it, niksen.

Even reading it, my skin crawled. I have the sort of visceral reaction to the idea of sitting still in silence that a three-year-old might. I want to squeeze my eyes shut and stick my fingers in my ears and maybe do just a tiny bit of screaming.

Doreen Dodgen-Magee, a psychologist who studies boredom and wrote the book “Deviced! Balancing Life and Technology in a Digital World,” likens niksen to a car whose engine is running but isn’t going anywhere.

The problem is not just other people’s perceptions and the social encouragement to constantly achieve. It’s our own internalised stigma. ‘Why do I matter?’ I ask myself, more often than I want to admit. ‘Because you’ve achieved this and this and this’ my brain replies helpfully, instead of something much more valuable, like: ‘Because people love you even if you’re sitting down doing niksen.’

I wonder how much of this is muscle memory from early humanhood, when the value you had to the herd was how much food you brought home. Unfortunately for me, I’m one of the sick ones that’s going to get picked off by a lion. I can already hear the Attenborough narration of my short life.

Having said that, there is evidence of even early humans taking care of the weaker members of the pack, so maybe my primordial compulsion to Do All The Things isn’t quite that old. 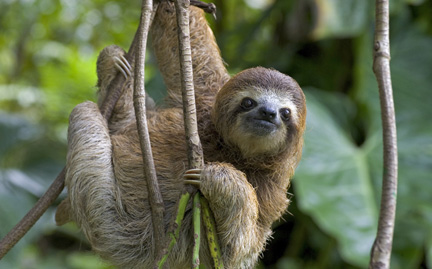 In late Capitalism, laziness is a political act.

When I came home from hospital five years ago, I often alikened myself to a sloth. I moved slowly, spoke slowly, ate slowly. I slept. When I walked across a room, I moved from handhold to handhold, stretching out one arm at a time, inching from a chair, to the table, to shuffling along leaning on the wall. When people talked to me, I blinked at them so slowly it felt like a mini-nap in between. Then I’d open my eyes and be like ‘Oh. Are you still here?’

Sloth is, of course, one of the seven deadly sins, if you sign up for that sort of thing. I believe in God but prefer most of my sins as served by Hell Pizza. Wikipedia states that sloth is the most difficult sin to define, but it could be called “a habitual disinclination to exertion, or laziness.” 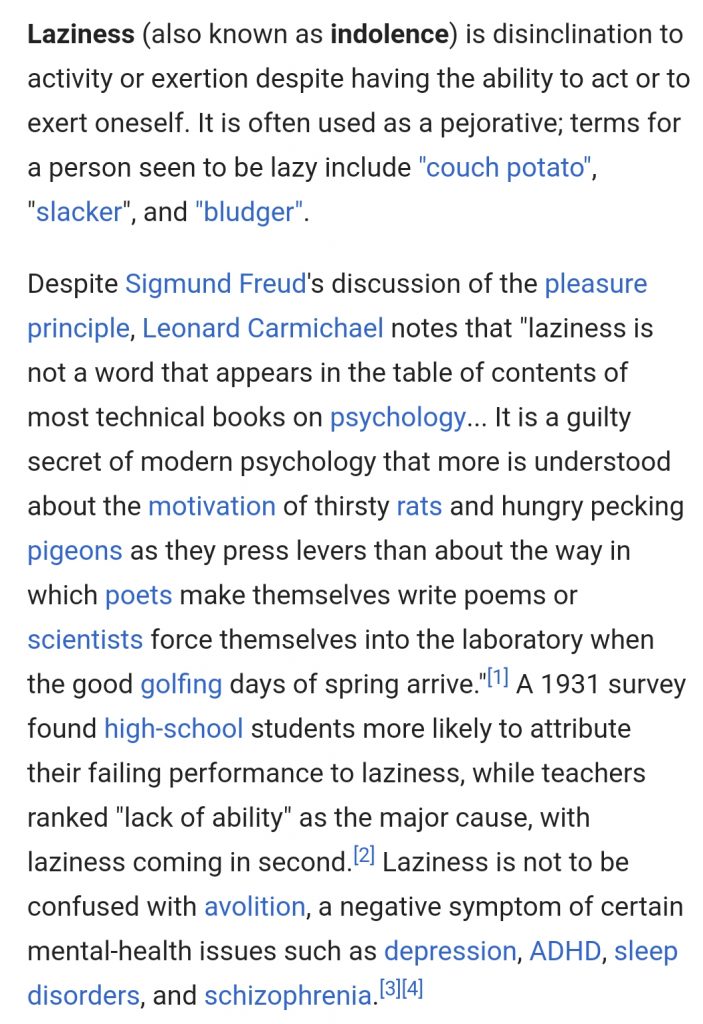 It’s interesting that rich idle people would usually be called indolent, and poor idle people are bludgers ( a word weighted with enough negative connotation to drown any beneficiary).It’s interesting and important to see the distinction made about avolition, because I’ve had too many of my depressed friends attack themselves for being lazy, when in fact they were ill. It’s interesting to think that we don’t know that much about the psychological complexities of laziness.

I believe that humans are fundamentally “lazy,” and I don’t believe that’s a bad thing. Yes, some people love working (I do), some genuinely love exercise (I do not), but most of the time, let’s be honest, we’d rather be laying down eating the aforementioned pizza, than fainting during a spin class.

I have not fainted during a spin class. I have however fainted getting off a treadmill, which I’m going to use as a tenuous example to prove my point.

We’re subjected to a constant barrage of self-help that encourages us to focus on the now, care more, care less, care about different things, eat more, eat less, eat something else, let go of the past, learn from our mistakes, make plans for the future but stay present, and cultivate mindfulness. And of course, the one thing that nearly all of them agree on: put down your phone.

Sandi Mann, a psychologist at the University of Central Lancashire in Britain, added that niksen can be “when we’re not doing the things we should be doing. Because perhaps we don’t want to, we’re not motivated. Instead, we’re not doing very much.”

More practically, the idea of niksen is to take conscious, considered time and energy to do activities like gazing out of a window or sitting motionless. The less-enlightened might call such activities “lazy” or “wasteful.” Again: nonsense.

The Case For Doing Nothing is no radical change. Its hook may be a cute foreign word, but it too wants you to put down your phone, go for a walk, and focus on the present.

Here’s the thing. As much as I’m looking for permission to do nothing: I don’t actually need it. How I spend my time doesn’t require defense, including from myself. And especially from people who love nothing more than to tear beneficiaries to shreds.

And while answering “What have you been up to?” or “What are you doing?” with “Nothing” can be a conversational doornail, I’m going to try practicing it, even when it’s poetic license.

I think the less we stigmatise laziness, the healthier we’re all going to be.