The report on recommended changes to our welfare system is now public. So far, the government response is, to be blunt, piss poor. So will it actually change anything?

I’ve been trying for maybe two weeks – since the Welfare Advisory Expert Advisory Group’s 200-page report was made public – to write something researched, factual, coherent. But every time I sit down, one of two things happens.

To be clear, I have read the report – mainly the 50-odd robust recommendations the 11 experts made after consulting with more than 30,000 New Zealanders over six months.

The members of the WEAG were appointed last year to investigate New Zealand’s welfare system. As it says in the name, they are all experts of one kind or another, entrusted by the government with this mammoth task.

However, for me, it does. It isn’t perfect, but it’s far more comprehensive than I dared to hope for.

The primary problem is this: The government seems set on ignoring 95% of it. So far, they have agreed to minor adjustments that, if implemented, will barely scratch the surface of the systemic issues beneficiaries and their families face every day.

Moira Lawler from Lifewise calls the minuscule increase in abatements – the amount a person can earn before their benefit is drastically reduced – mere “window dressing.” Lawler says the current threshold of $80 was set in 1986, and the proposed increase to $105 falls far short of addressing inflation.

Benefit levels themselves will not be going up as per the WEAG recommendations.

The election promise of sanction removal for solo mothers who refuse to name the father of their child will be honoured, and 263 more frontline WINZ staff will be funded, their goal being to transition people into work.

To me, that sounds more like National bullshit than anything else. WINZ’s goal should be to support people to live their best life, not to focus militantly on getting people off the benefit. For many of us, that will probably never be possible. For many of us, some form of support will always be needed. For many of us, the heavy shove towards working – no matter whether the work is suitable and healthy – will only push us in the other direction.

Maybe some of the money for the 263 staff would be better spent on training existing staff to actually help people.

It is impossible not to feel at best demoralised and at worst terrified. Terror is a big word – I should know, it’s what made my original posts about life on a benefit catch the attention of Paula Bennett what back when. It’s a word with power.

It’s a word that adequately describes life on a benefit. As does dehumanising, which is how Hannah McGowan describes her 20 years as a beneficiary. Hannah, whose story isn’t unlike my own, writes “I always feel like WINZ is looking over my shoulder.

Some people might think this is scare-mongering, but today’s news proves how bone-chillingly true it is.

The story, broken by Radio New Zealand, says that the Ministry for Social Development has been unlawfully breaching the privacy of beneficiaries since 2012. The Privacy Commissioner’s enquiry shows MSD has “systematically misused its powers while pursuing people it suspects of fraud.”

This “misuse” involved not only gaining access to information from other government departments, but going as far as accessing the most personal data imaginable and confronting beneficiaries with it. 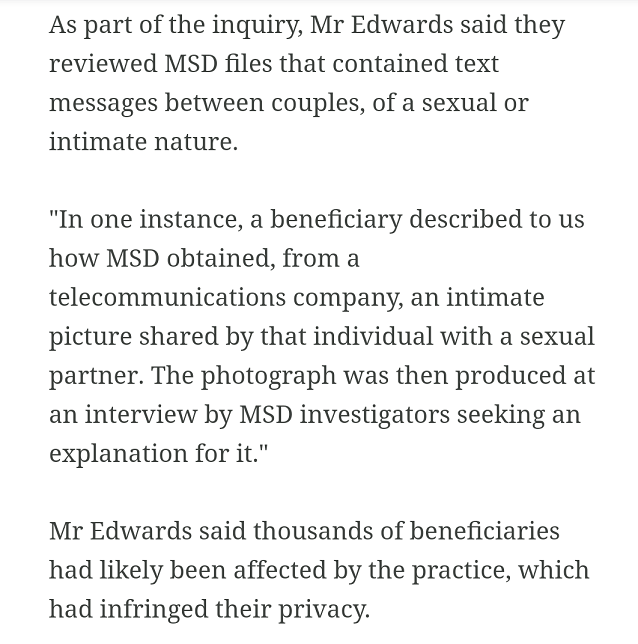 I cannot imagine how that person must have felt. I know how I feel, wondering now if I’ve been subjected unknowingly to the same thing. I know how sick I feel just receiving a letter from WINZ, how terrified I would feel facing an investigation. And to have something like that thrown down in front of me like they were playing fucking mob boss?

No matter where you stand on welfare, we’re supposed to live in a democracy. We’re supposed to live in a place where our personal lives don’t become a political socket wrench to the knees. There is no defense for this. I do not care if that person was having a relationship they hadn’t declared to WINZ, I don’t care if they were having casual sex, I don’t care if they’re a sex worker. I have no interest in why they took the picture. I care that WINZ obtained it illegally and used if to threaten them.

That is a gross abuse of power and we must not stand for it.

What is the fucking point in appointing a team of experts to spend months researching and consulting and weighing carefully to present sensible and reasonable and compassionate recommendations to the government, if this shit is going on, and if the government then discounts nearly all of those recommendations?

We have a general public who are hell-bent on screwing themselves to the wall on the “beneficiary as tax-stealer” narrative, even when it can be proven wrong over and over. There is no reason. There is no sense. There is no compassion.

So, thanks very much, government, for allowing beneficiaries to earn $25 more a week. I’m sure we’ll all enjoy that while MSD continues to steal our private property and our dignity and our hope.

And also, MSD? FUCK YOU.

2 Replies to “The WEAG Report: What was the point?”