My immediate response when I try to search the Mines of Moria of my memory is usually a 404 error, and trying to think about the whole past year crashed the server. But after doing some “look harder” like Rafiki to Simba, I realised it’s actually been a pretty good year.
Wow, way to mix both metaphors and movies, Wilson. We’re off to a good start.
You’ll hopefully be pleased to know I didn’t face a Balrog and I didn’t see the ghost of my father in the night sky. Dad’s still on the earthly plane so I think we’d be having a bit of a different discussion if I had.
The year didn’t begin that great. I was too sick to go out for NYE and I don’t think I was even awake when the clock ticked over to 2018. But hey, sleeping is a pretty good time, so I don’t blame myself.
For the first time in years I didn’t have a summer break (times when I’m too sick to work don’t count as a holiday from work). I was busy working on my investigation into mental health for New Zealand Geographic. By this point I had done most of the traveling and interviewing, and I was staring at my mountain of research in abject horror. I didn’t know how I was ever going to make it into something readable. But, with a lot of encouragement from friends and a lot of support from my fantastic editor Rebekah White, I did the thing.
I am in awe of anyone writing longform like this, especially books. I catch myself thinking how much I want to write a book, and then I whisper

Workwise I also had an essay about anxiety published in the amazing collection Headlands, edited by Naomi Arnold and Victoria University Press, which I’m really proud to be part of. If you have anxiety or know anyone that does, it’s seriously seriously useful to read.
I had a poem published in The Friday Poem anthology, and another – Zopiclone Letters – was blown up on a public wall as part on an installation in the Nelson Arts Fest.
I wrote some essays for The Wireless about an invasive medical procedure. I went through the invasive medical procedure (seriously, I could say invasive a bunch more times and that still won’t cover what that was like). Oh, and I started my recovery from chemotherapy, which I finished in December 2017. Just this past month I finally had enough hair grown back to have a fringe again, and I had this moment of such relief and recognition when I looked in the mirror. I felt like my face was mine. 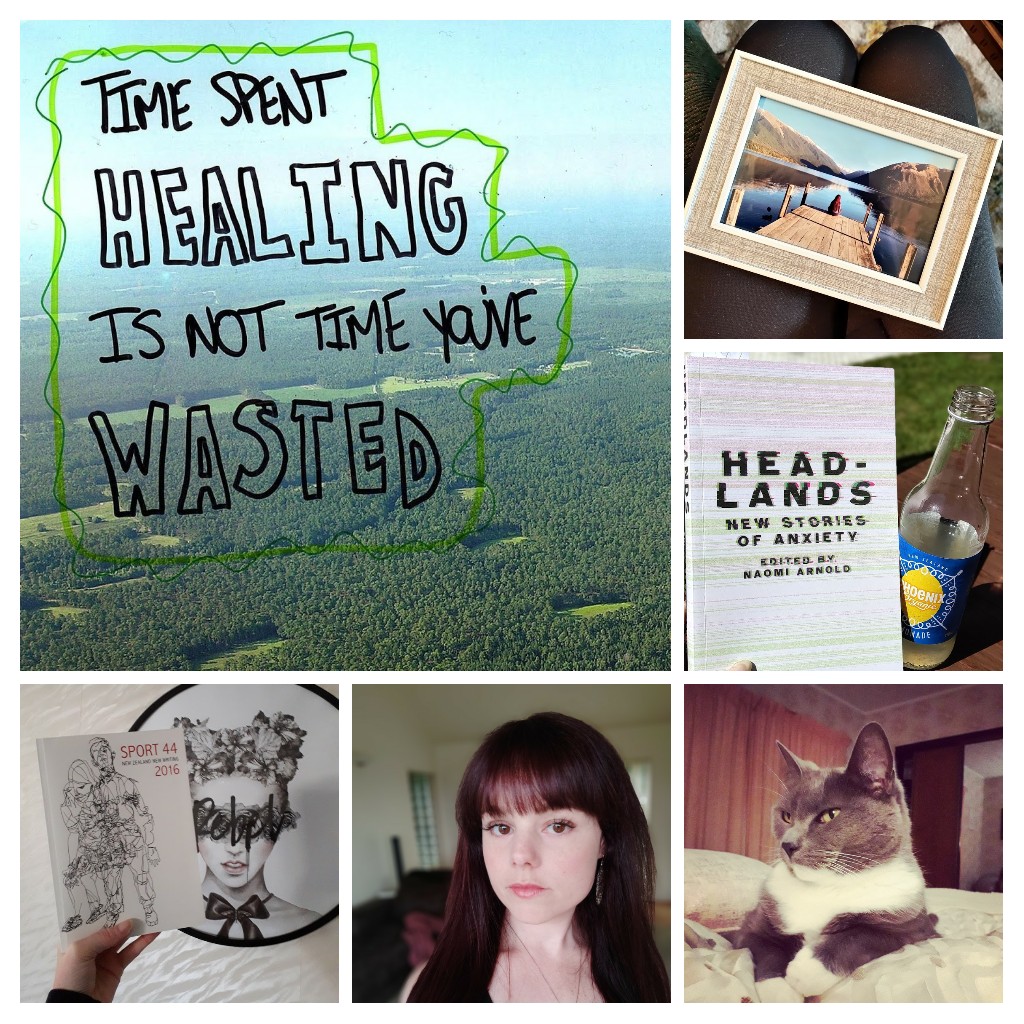 While we’re talking about medication, and faces, I have spent the entire year attempting to come off the steroid prednisone, which works very well for managing my arthritis symptoms, but wrecks everything else, including weight. ‘Moon-face’ is a well-known side effect. Which, given that I also went public about having anorexia a few months ago, was an additional challenge for me. The withdrawal from prednisone has been Hell On Earth. It’s taken twelve months to go from 15mg to 1.25 – yes, I have to go a quarter of a milligram at a time, every 2-4 weeks. It’s so sensitive that every step down sends my body into a nosedive – I ache all over, I’m too tired to leave the house, and I have irrational surges of rage. I am really, really looking forward to celebrating being off completely.
Earlier in the year I started a trial of Modafinil, which is often used for ADHD and narcolepsy. It’s subsidised for those uses, and as I don’t have either of them, I have to pay for the scripts, which are $120 for two weeks. Due to this and also because it makes my anxiety worse, I try to only take half a dose, but it does really help with my energy, so I’m really grateful to have it.
I started working a few hours in the office I used to work in when I was well, which has been amazing, when I can manage it. It’s so, so nice to feel like part of a team.
In March, my application for the Supported Living Payment was finally approved. I had a lot of mixed feelings about it. I felt like like I wasn’t sick enough to “deserve” it, but I also realised ‘Oh shit, if WINZ agrees that I’m sick, I really must be sick.’ It shouldn’t have been a newsflash; I just never thought I’d actually manage to convince them. Being given the support I qualify for has made a huge difference. It’s not that much more money, but it’s significant to me, and more than that, WINZ doesn’t require me to give them medical certificates every three months, or prove I’m “looking for a job.” I was blue in the face from telling them “I have a job, I do it as much as I can, but I’m too sick.” This meant much more than a financial shift. It meant being believed.
While we’re being political, I can’t really look at the year and what’s changed without acknowledging the emotional rollercoaster of the election and everything that’s improving because of our new Labour-lead government. I want to remind everyone who we lost from NZ politics because of that election and her standing on the line for marginalised people – thank you, Metiria Turei.
I feel like I have learned so much this year. I’ve faced many, many challenges including grief, but I’ve had so much support and love, and one of the biggest opportunities I had to learn was seeing a life coach.
I had zero idea what to expect and made a lot of typical assumptions – at best, they’d “coach” me on what to do with my life, at worst, they’d be an expensive charlatan.
As I’ve mentioned in previous posts, Cher was neither of those things. I only went to see her because a friend of mine told me some of the things she’d learned with her, and it sounded like exactly what I needed. I’ve been doing counselling for years, and it’s incredibly valuable, but sometimes, you don’t want someone to say “And what do you think that means?” You just want them to cut through the bullshit and give you some skills. Cher did exactly that. In a very kind way, using psychodrama and other techniques, she taught me a bunch of ways to deal with conflict – including that inside my own head. Those lessons were so important and I’m glad I have everything written down so I can remember and practice it. That’s the hardest thing – using the tool when I actually need it.
I don’t know what’s in store for me in 2019. I have a lot of hopes and dreams, but if getting sick has taught me anything it’s that God laughs when we make plans. I try not to get too hung up on specifics now. When my therapist suggested my goals for this past year needed to be more specific and measureable, I disagreed. I wrote them deliberately so that I can look at them and just see whether I feel like there’s progress, not whether or not I can check a box. Box-checking makes me anxious as hell. Goals should be inspiring, not terrifying.
On that note, this has taken me… two weeks, ish, to write, and it’s more than enough. I’m gonna go lay down now.
All the best for 2019, everyone, and thanks for sticking with me. 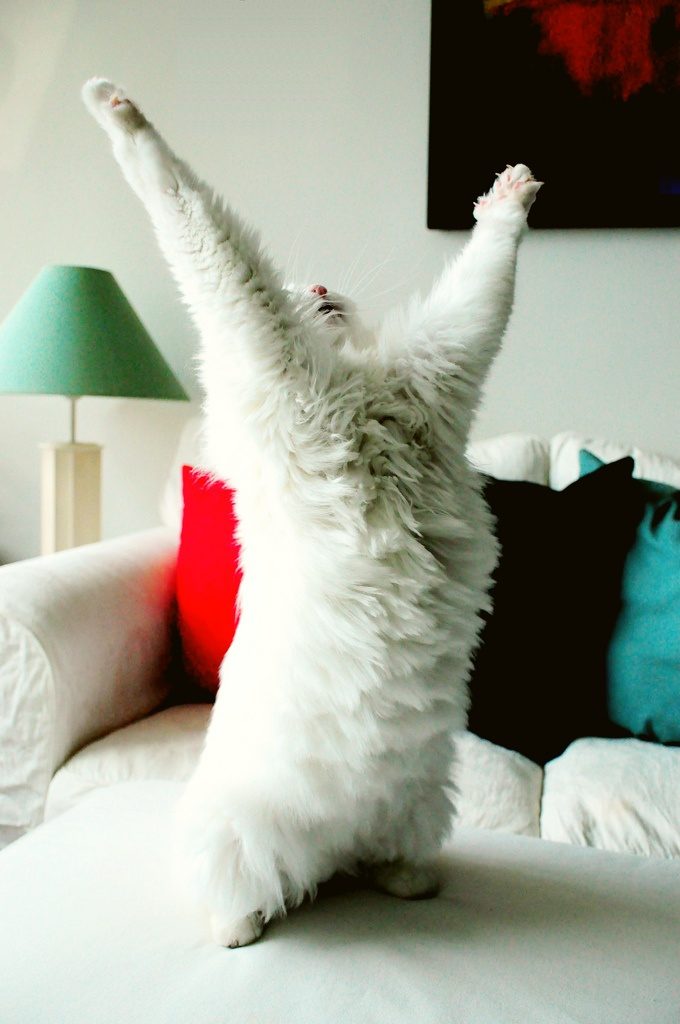