I was speaking to a friend the other day, and she mentioned that her husband had ‘depression-an-anxiety,’ just like that, with the ‘d’ dropped out and all-as-one-word. Which made me think how often I hear it that way.

I’ve been interested for a while in how these two conditions or diagnoses so often go hand-in-hand.

Obviously, we’re talking very broadly here, as “depression” and “anxiety” both cover a huge spectrum of specific illnesses, disorders or symptoms. So, for the purposes of this, I guess we could say I’m talking about the sort of depression where you may have bad episodes, but for the most part you live a full and healthy life (with or without the help of medication). And the sort of anxiety that might interfere with some commitments – Generalized Anxiety Disorder, for example, rather to a more acute situation. (GAD can and does become acute, of course, I’m just trying to be specific here, which is difficult!)

For me, depression-an-anxiety are inextricable. I’m actually often not sure what symptom I can attribute to which. I do know that anxiety came first in my life, with my earliest memories of an anxiety disorder occurring around five years old. And this wasn’t just “Oh, she’s a shy kid, “She’s a bit nervous.” This was serious stuff, which would later become a small but comprehensive list of diagnoses.

My depression I think kicked in around 12 or 13. I remember feeling inexplicably sad quite often in primary school, which became situational when my parents divorced. But the real guts of the mood stuff happened with the onset of puberty and moving into an all-girls school where a girl who is “different” doesn’t always get the care from her peers that you’d hope for. Read: pretty much never.

So again, while I felt that my “sadness” didn’t really have a reason, I could still link it to my daily life. I knew what depression was, I had had personal experience of it in others. It seemed like a big, scary, insurmountable thing and I was pretty determined not to have it.

I got the diagnosis of Major Depressive Disorder once I’d left home at 18. Things had reached a bit of a crisis point and I agreed to trial medication for the first time. I’d been staunchly anti-antidepressants for the previous two years, despite doctor’s suggestions.

It took a couple tries to find something that worked. And it did, for quite a while, until you know, the whole chronic illness thing hit me, my body no longer responded to anything like it was supposed to, I had to give up my job, and I became a shut-in because I was too fatigued to leave the house. That’s when both the depression and anxiety ramped up. And why wouldn’t they?

Anyway, as I said, I find it hard to even distinguish between the two now. Obviously if I have a panic attack I know that’s anxiety, and I know having a low mood makes me more prone to that, and vice versa. It works in self-perpetuating cycles.

So, having understood this about myself, I decided to do some very very basic research in the form of a Twitter poll. I asked people to respond if they had depression, or anxiety, or both. Some people talked to me a bit about their experiences as well as answering – which had come first for them, what caused it, how they were doing now. The numbers ended up looking like this: 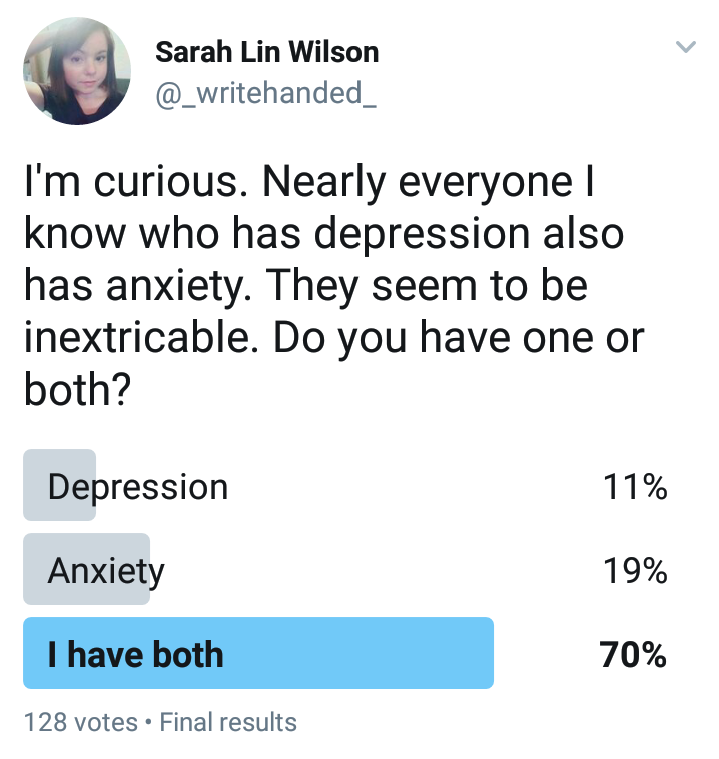 which is not very useful, given the sample size, but would seem to suggest my situation is a fairly common one.

According to this article in the Psychiatric Times, comorbidity (horrible word) of psychiatric disorders is quite common, with 50% of adults reporting two or more in a 12 month period.

“The National Comorbidity Survey Replication1 reported that in a 12-month period, the prevalence for an anxiety disorder was about 18%, and for a mood disorder it was 9.5%. Lifetime prevalences for any anxiety disorder and MDD were approximately 29% and 16.6%, respectively.4 Assuming a (perhaps conservative) 50% comorbidity rate, between 5% and 9% of the adult population has comorbid depression-anxiety in a 12-month period.”

They’re not huge numbers (good), but they could be enough to call the correlation.

It’s interesting that a few people mentioned to me that they couldn’t really tell their depression and anxiety apart – what symptom they are experiencing when, and why – because the criteria for MDD and GAD in the DSM overlap. A symptom like depressive rumination can also be the worried or obsessional thinking of GAD.

From what I can tell from my very top level and basic reading of further papers, comorbidity used to be contentious – and perhaps still is in many places – but things like  genetic testing prove it’s happening, even if we don’t know exactly why. Genetics, brain chemistry and life events all make the list.

It makes absolute sense, actually, that certain life events are going to trigger this response – especially anxiety disorders. We know what happens in the body when there’s been an accident or trauma. Unfortunately it seems sometimes that whole fight-or-flight thing, which is really useful at the time, just gets stuck in the “on” setting, and stays around being, quite often, just a goddamn nuisance. And once that’s happening, you get down and frustrated and maybe it starts impacting on your work and your socialising and your self-esteem, and before you know it: you’ve got depression. The opposite cycle happens too. It’s not that the brain isn’t smart. It’s that the brain is too smart for it’s own good. All it wants to do is protect itself, in the best ways it knows how – though it sure might not feel like it.

I guess when I set out to ask the question – is this common? – I kind of already knew the answer, anecdotally, and while I would obviously never be happy with others might have similar experiences to my own; at least I know I’m not alone. This is a recognised thing that happens for people. It’s a tough, oftetimes awful thing – but it’s on paper. It’s scientific fact.

So no matter what anyone might tell you about “hardening up” (and send them my way if they do because I hate this phrase with a passion) – this is real. And they can’t take that away from you.