Today is Suffrage Day in New Zealand. On September 19 in 1893, we became the first country in the western world where women won the right to vote.

Election Day is this Saturday – but you can vote now, and any time up to and on the day, which is a thing I didn’t know I until this year. I thought early voting was for people who couldn’t vote on the day itself, but it’s available to everyone – even if you’re not yet enrolled.

Here’s how to find where you can vote, and information on the process. 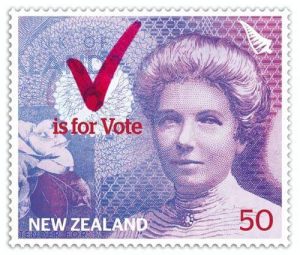 Advance voting has been extremely popular this year, which is very encouraging, and maybe goes to show there’s some better information available. Previously, it seemed to me that advance voting was something some people could do, but this year the message has been: “Hey, did you know you can vote now? Why not do it!” which is great. For me it’s an accessibility issue – it was much easier for me to go when everything was quiet, and I’m sure that’ll be the same for many others with disabilities or challenges like anxiety.

It’s very hard for me to stress how important it is to vote. It’s a democratic right, and, especially if you’re a woman, one that was hard fought for. It’s our biggest chance to get a say in the future of our country, to help shape policy, and to help the people who share our communities.

I know that for some people, politics is boring. I understand that on an academic level, but it also blows my mind because how can you not care about this thing that’s going to impact your life? Your children’s lives? I guess some people don’t see the correlation between policy and their daily living, and I have to recognise my privilege in this. Not only did I grow up with a father who was very politically engaged, I was lucky enough to go to university and get an education and use that to continue learning. Not everyone has that background – and not everyone wants to. As much as I might disagree with that, it’s still their right.

However. Voting is of utmost importance to me and I will bang on about it to anyone who’ll listen. I’ve written before about why it matters, and how much this election will effect my life. It’s terrifying and I’m anticipating Saturday with equal parts excitement and fear.

A quick rundown: the outcome of the election will probably determine:

That’s a tiny snapshot of the things that will effect me personally. Poverty, children’s wellbeing, housing and homelessness, education, funding for community organisations – all these things are also critical. (Increasing benefit rates would help with some of them too).

I thought it might be interesting to share a chat with a friend, about voting and the issues that matter to her.

Have you voted yet?

“No, but only because I feel like there is something special about getting out there on the day. I think the early voting set ups are awesome, anything that can reduce barriers to voting and up the numbers is a win.

What are the key issues that matter to you this election?

Education! Not only is education important to me on a personal level as a teacher it is also the best weapon we have to change everything else. Education creates opportunities and breaks poverty cycles. It empowers our kids and gives them ability to question things, and to work to change them. Children should be provided with the best possible care and that isn’t going to happen when funding is cut and ECE teachers are not seen as equal to primary and secondary teachers. I think reading up on all the education policies being announced can give you a pretty good feeling of the values of the party as a whole. If a party isn’t going to do what is needed for education – then the rest of it all falls apart.”

You’ll all make your own choices, but please remember, women especially. We fought bloody hard for this.

More than 90,000 New Zealand women went to the polls on 28 November 1893. Despite warnings from suffrage opponents that ‘lady voters’ might be harassed at polling booths, the atmosphere on election day was relaxed, even festive.

Even so, women had a long way to go to achieve political equality. They would not gain the right to stand for Parliament until 1919 and the first female MP was not elected until 1933. Today women remain under-represented in Parliament, making up just over 30 per cent of the MPs elected in 2014.