There’s so much messaging in the media about “reaching out” if you need help. But a lot of it doesn’t acknowledge or examine how difficult reaching out can be to do – or why.  Also, just quietly: I’m really sick of the phrase and I’m sorry to be using it.

However, it’s relevant to the story I’m about to tell.

Asking for help can be extremely intimidating. And when you’re already right down at the bottom of the well, maybe you’re worried that your voice is never going to reach the surface.

This is not the first time I’ve written about this exact subject. I did so here, the wake of Charlotte Dawson’s death in 2014.

In that post, I give some reasons why “reach out!” can’t be the catchphrase of mental health support, including:

As I said, I want to share a story. It’s a very recent story, at the time of writing, so some of you will be familiar with it. I’m telling it because I hope it will help others who want or need to reach out, but haven’t for whatever reason.

My reason was fear.

I was so afraid of letting anyone know that I wasn’t ok, that I let friendships lapse, or actively avoided them. I watched myself get sicker and sicker, with this sort of vague horror, like it was happening to someone else. I knew things were bad, but it took them getting Real Bad for me to decide: This can’t go on.

And you know what I was afraid of? I’m actually embarrassed to say it, even though it’s a completely legitimate fear.

Plain and simple. I was terrified that I would put myself out there, be vulnerable, be open about my mental health – and be judged, rather than be helped. That I would “reach out” – and no one would reach back.

Boy, was I ever wrong. And of course I was, because my friends and family would never ever judge me. 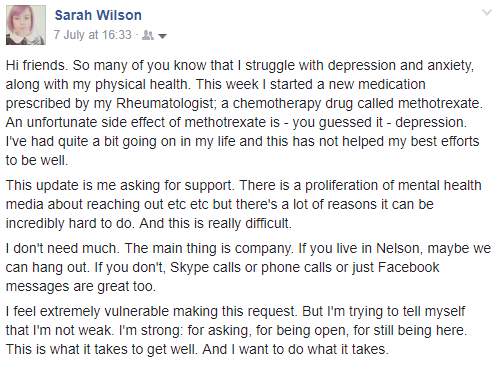 Not one person suggested I was weak. Not one friend left me in the dark.

I should have known better than to underestimate them so badly, and for that, I apologize.

Not everyone is going to get the same response. I recognize the extreme privilege I have, to be part of such a truly supportive network.

But please, do not let fear stop you from asking for help, no matter how you do it. It doesn’t have to be as public as I was. It can be one person, it can be a helpline, it can be an email, or a text.

Reaching out may be a flawed slogan, but it’s halfway there. Sometimes people want to help, but they don’t know what you need, or if you even want their support. It takes courage to be explicit about those needs. I deeply understand that. But your voice is needed. You are needed.

I’m so grateful to everyone who has.