You might have noticed me linking to a new online magazine called Folks. My friend Naomi Arnold wrote about me, and I wrote about writer Stephanie de Montalk.

Folks is a US-based magazine that aims to humanise people with chronic illness and disability. I only learned about it because Naomi phoned me up to ask if she could interview me about being a disabled writer. I couldn’t research the site much because it wasn’t live yet, but they seemed to have a good manifesto, so I said yes. The result was this QA: To cope with chronic pain? Write your heart out. 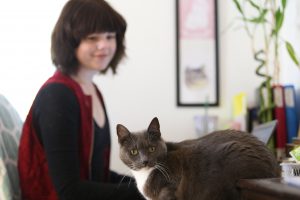 I was really pleased with it, and so I approached the editor to see if I could do some writing for them myself. I knew exactly how I wanted to interview – Stephanie de Montalk, who wrote The Book I Never Stop Talking About: How Does It Hurt?

“Interviewing” Steph really consisted of us both lying down and gossiping for about four hours, which was exhausting and exhilarating. Obviously, we are both writers who live with chronic pain, so we are able to meet on more than one level. We rarely run out of things to talk to about. 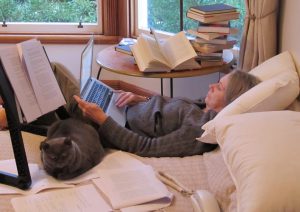 I have at least one more piece forthcoming from Folks, which is cool. Plus they have a bunch of other good pieces like ‘Because sickness doesn’t mean the end of sexuality,’ ‘What do you say to someone with cancer?‘ and ‘The girl with the beautiful photographs.’ Some of them err on the side of inspiration porn, but in a way that’s mostly ok with me – ie, they don’t try and make the person with the disability a message for abled people, the subjects retain their agency. Having said that, I haven’t read every single article, but what I have seen, I thought was good. Which is a nice change.