For some of you, this might not be what you want to hear. For whatever reason, you don’t want to think of me this way. But this is what I want. Please call me disabled.

I am disabled. I’m not just chronically ill, I’m not temporarily unwell. I am the definition of disabled: in that, I cannot do many things able-bodied people can do.

Disabled is not a bad word. It’s one I am choosing to use to describe myself, because it helps me understand and be kinder to myself.

Once I accepted this, once I started using these words, things became easier for me. It’s easier to set realistic expectations and realistic goals. I don’t spend all my limited energy battling reality.

I used to think I didn’t deserve this word. I had a real hard time deciding whether or not I have the right to it.  But I realised disability is not a competition. My disability will never be the same as anyone else’s, and my identifying as disabled should not impact on anyone else’s identity.

I think if my friends and family could use the word disabled – which is not a bad word, it’s an accurate description of who I am – then they might start to understand that I can’t just ‘push through.’ I can’t do all the things I used to do. I’m not that person any more.

I’m writing this for two reasons. The first is that, despite knowing logically that my life can never be fully understood by anyone but me, I hope to really qualify how things are for me. I just want people to understand that “pushing through” is no longer an option for me.

I am so grateful, and so appreciative of the friends I have, and I feel guilty, because I think that maybe they don’t see that all the time. My ability to see spend time with people is severely limited. Conversation exhausts me. I’m restricted by transport options and activities and venues. I’m restricted by the fact I can really only do one “thing” per day. That “thing” might be some writing, it might be resting, it might be doing some chores, or it might be seeing a friend. It’s a horrible choice to have to make.

I’m sorry if you’ve ever felt rejected, or unloved, or like I didn’t prioritise you because of this choice.

The second reason I’m writing this is because, as Audre Lorde said, “Caring for myself is not self-indulgence, it is self-preservation, and that is an act of political warfare.”

I recently discovered Johanna Hedva’s Sick Woman Theory. Johanna has several chronic illnesses. She is often unable to get up for days on end. This happened during the Black Lives Matters protests in Los Angeles in 2014.

While she lay in bed, able to hear the protests through the window but unable to participate, she wondered how people with illnesses and disabilities that render them incapable of public protest, can still do so. How can we be politically active when we cannot be active? 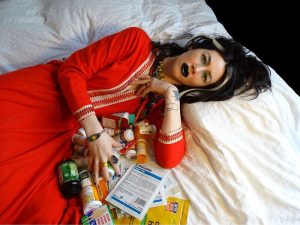 The theory discussed many aspects of the intersections between politics, feminism and disability. The central question is; “How do you throw a brick through the window of a bank if you can’t get out of bed?” Johanna talks about chronic illness and the lack of understanding around it, especially for women, who are so often unheard and undiagnosed.

Sick Woman Theory is for those who are faced with their vulnerability and unbearable fragility, every day, and so have to fight for their experience to be not only honored, but first made visible. For those who, in Audre Lorde’s words, were never meant to survive: because this world was built against their survival. It’s for my fellow spoonies. You know who you are, even if you’ve not been attached to a diagnosis: one of the aims of Sick Woman Theory is to resist the notion that one needs to be legitimated by an institution, so that they can try to fix you. You don’t need to be fixed, my queens – it’s the world that needs the fixing.

I offer this as a call to arms and a testimony of recognition. I hope that my thoughts can provide articulation and resonance, as well as tools of survival and resilience.

And for those of you who are not chronically ill or disabled, Sick Woman Theory asks you to stretch your empathy this way. To face us, to listen, to see.

Johanna goes on to say that that the Theory “is an insistence that most modes of political protest are internalized, lived, embodied, suffering, and no doubt invisible.”

This was a very new idea to me, and also totally true. I share my experiences here, I protest here, but 99% of my protest cannot be expressed, because it is simply is. It’s simply me, living.

In the main article on Sick Woman Theory, which is adapted from this lecture; My Body Is a Prison of Pain so I Want to Leave It Like a Mystic But I Also Love It & Want It to Matter Politically, Johanna so intelligently and compassionately addresses gender, race, disability… like, fuck. When I read it… it’s that feeling of finding something that says what you want to say but you aren’t smart enough to. You know?

She ends on some comments about capitalism, which are worth reading in full, but this excerpt is important:

The most anti-capitalist protest is to care for another and to care for yourself. To take on the historically feminized and therefore invisible practice of nursing, nurturing, caring. To take seriously each other’s vulnerability and fragility and precarity, and to support it, honor it, empower it. To protect each other, to enact and practice community. A radical kinship, an interdependent sociality, a politics of care.

I was going to also talk about this article on self care by Laurie Penny, but I think this is enough for now.

One Reply to “Please call me disabled”