I finally got around to doing Stuff’s “Rich or Poor?” indicator. I mean, I had a pretty good idea that I’m poor. But my result “Your standard of living is much worse than you thought” made me give a bark of shocked laughter.

Don’t get me wrong. Nothing about this is funny. It was just the wording that struck me, because honestly, I already think my standard of living is pretty shit. But I’ve become desensitised. So actually seeing that was quite shocking. 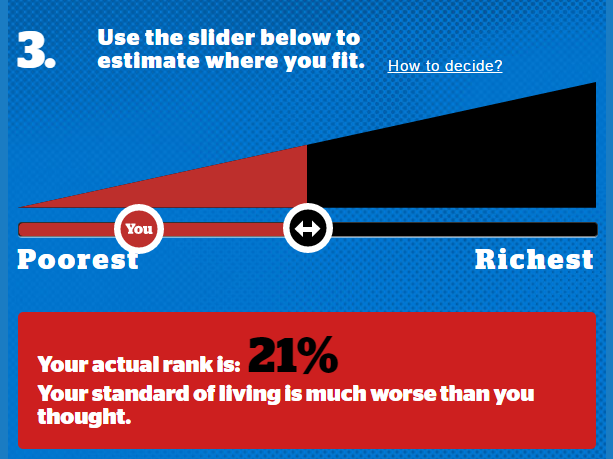 There’s a Jewel song – yeah, I like Jewel, sue me, she was really good before the pop-fluro lycra phase – anyway, the song is Deep Water and the lyrics are: You wake up to realize/ Your standard of living somehow got stuck on survive.

That’s how I felt. I am in survival mode. And it’s actually really messed up that I’ve gotten used to that. That I’ve been internalising the plentiful messages that tell me that this is the best I can hope for, that I’m lucky that I have this much. That I should be quiet.

But that doesn’t mean that it’s not shit, to be living hand to mouth every week. To be afraid every time you get a letter or an email, because it might be this bill that breaks you. To take an hour to do the grocery shop because you’re comparing prices and umming and aahing over what you can do without this week.

And I’m far from alone. Most of my friends have pretty similar situations, some worse off, some better, but most not by much more than a few hundred dollars a week.

Some friends of mine, a couple with one child who have just bought their first home, also did the test. While aware that access to home ownership makes them well-off by today’s standards, they were kind of shocked to see that they were considered in the 65th percentile. They were only able to buy the house through access to Kiwisaver and a Welcome Home Loan, because of the location, and because the sellers were divorcing and really wanted to sell. They are able to heat their home and keep their kid in school, but they buy budget food and homebrand items and mostly shop in the discount sections of Kmart and the Warehouse. They’re not struggling to survive, but this Indicator shows that was a basic or low income lifestyle even twenty years ago is now considered wealthy. Which is messed up.

The Stuff article – Budget 2016: It’s not so tough at the top, while the bottom gets ignored – has a lot of maths in it that probably makes sense to economists and people smarter than me. The thing that I took the most notice of was this graph (pictures! yay!), which basically shows what we already knew: the rich are getting richer and the poor are getting poorer. 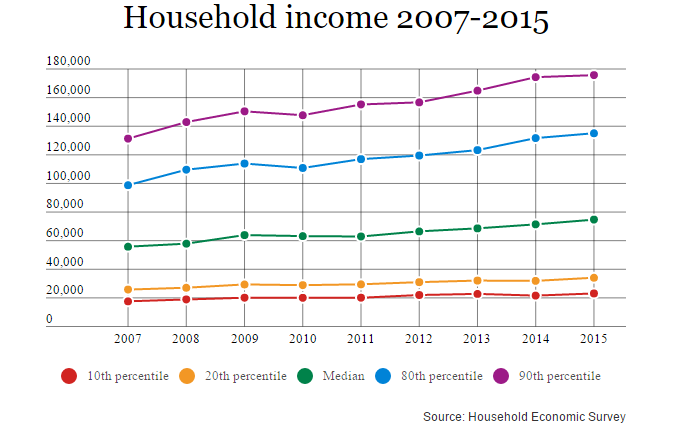 Researcher and Very Smart Man Max Rashbrooke (that’s his official title) (I’ve met him, he really is though), says that it’s all going to unwind.

“Since 2009, incomes have risen a little bit at the poorest end but there are much bigger increases at the richer end.”

“People are covering up the scale of inequality in New Zealand by borrowing massively. At some point it’s presumably going to unwind.

“A very large number of people are saying they do not have enough to get by.”

Many people with children earned less than this threshold.

In a recent analysis, Rashbrooke also said the proportion of tax paid by the top earners had not changed in years.

So much of New Zealand is living in poverty, and a small number is not. How can $37,000 not be on the poverty line? I mean, I get way less than that, but that’s for a family of three. That’s terrible.

In another post I’m going to write about the struggle for community organisations, who are bowing under the weight of taking care of those living in poverty, while relying on an ever-shrinking pool of funding. The Women’s Centre is getting more referrals than ever before, from everywhere from GPs through to CYFs and WINZ – all sending suffering people to community organisations because they themselves don’t have the mandate or funding to help. It’s devastating.

I’m not surprised Max is predicting that it’s all going to fall apart.

Something certainly has to break. I just hope it’s not the backs of poor people.