I want to talk about intersectional feminism with regards to people with disabilities. Being intersectional means caring about the rights of all women – women of colour, trans women, disabled women. A lot of the time, that doesn’t happen.

There’s two particular types of ableism within feminism that I want to highlight. (Read this here if you want to know more about what ableism is and how it can effect women in regards to health).

These are things that I have learned recently, that other people have brought to my attention. I want to share that knowledge, because they are things I have been doing without realising it. I am very grateful to the people I have learned from. 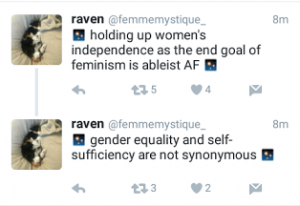 Femmemystique_ puts it way better than I can, and not only that, it wasn’t until they said it that I realised how much this had been bothering me. Since before I got sick, and so much more so now.

I have always valued independence over, and at the expense of, my own health. This is something that is encouraged by society and by feminism. Which is weird, because feminism sorta usually advocates for the opposite of what Western patriarchal society champions. But in this case, both seem to put similar emphasis on self-reliance as the pinnacle of achievements. Which is bullshit.

Don’t get me wrong. I love Beyonce as much as anyone else. But dependence and oppression are not the same thing, and it’s taken me a long time to realise that. 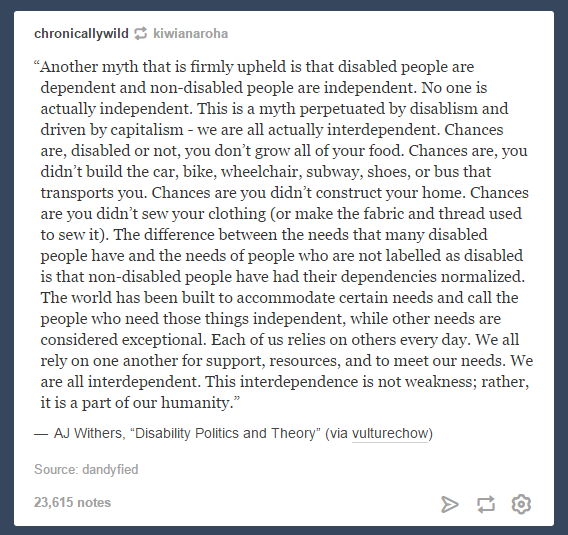 This was kind of life-changing for me to read. Because I had seen “independence” and “dependence” as these two polar opposite things, with one being extremely desirable and the other being total anathema, I was at war within my self and within my feminism. I thought – how can I have self worth and consider myself a strong woman if I have to rely on other people?

It’s really not that simple, and thank god for that. I’m not suggesting women hand over their power. Not at all. I’m saying, look between the lines. If you can’t choose A or B – what’s option C?

Interdependence is human. It’s desirable. It’s not antifeminist to want it. And it is ableist if you uphold independence as “the end goal of feminism.”

2. Coding people or behaviour as “creepy”

Ok so this is a little harder for me to unpick. Basically, my realisation about how I was being ableist by doing this came when I was talking to an autistic friend of mine. He pointed out that a lot of his behaviour can be coded as “creepy,” and how that’s really upsetting for him, because he can’t help that that is how it comes across. He’s a feminist ally but he feels uncomfortable talking about it, and frustrated that certain behaviours associated with neurodivergences are labelled as creepy.

I blinked in silence for a while when he said this. For days, actually. I am at war with myself on this one. On the one hand, I think it is extremely important that women protect themselves, and it’s often going to be impossible for us to tell what’s behind a person’s behaviour, especially if it’s online so there’s no others cues or clues. So we have to make assumptions to keep ourselves safe. But he was right. Those assumptions can be ableist as hell, and I’ve been guilty of doing this, and I was quite ashamed of myself. So I guess it’s about how you deal with that. Can you ask further questions to verify the situation, without putting yourself at risk? Can you have compassion, while remaining safe? This is not a black and white thing in the slightest, and I don’t know the answers to these questions.

I’m not saying one way or the other with this. As I said, I just want to share my learning as it comes, and this felt super important to my learning about how to be an intersectional feminist. And obviously, disability advocacy is very important to me, mainly for women but also for men.

Previously, it was thought that autism was much more prevalent in men than women, but recent research is showing it might be more like a 50/50 split. The numbers were skewed because autistic traits can be less obvious in women – or they can seem like what women are socially expected to do, ie being quiet in group situations – so they weren’t being diagnosed. Plus, the diagnostics for autism were written for men, and have not been updated to reflect women. Finally, many autistic traits can look like Post Traumatic Stress Disorder symptoms, and women are the single largest group effected by PTSD. Autistic women can also get diagnosed with bipolar disorder, borderline personality disorder, and/or attention deficit disorder.

When you account for all this, you can see how important this discussion is to feminism. Again, women are missing out on getting properly diagnosed due to ableism.

You’re going to hear me say the word ableism a lot in the coming months. I’m becoming more and more immersed in why disability advocacy is so vital in feminism. As a disabled woman, the friend of disabled women, a volunteer for disabled women… it’s pretty much top of my list.

If your feminism isn’t intersectional… it’s not for me.

3 Replies to “Is your feminism ableist?”