A new study has linked depression with a 30% increase in inflammation in the brain. That’s kinda massive.

While it’s scary to learn that inflammation – the main symptom of my Ankylosing Spondylitis – is probably also a factor in my depression, I’m a big believer in the whole knowledge is power thing. This information could help us understand why current antidepressant technology doesn’t work for 50% of people. Anti-inflammatory drugs might have a new role to play.

The team investigated whether inflammation is a driver of clinical depression, independent of other physical illness. They found that people with depression had up to 30% increased inflammation in the brain. Other evidence showed it can drive a multitude of depressive symptoms, including low mood, loss of appetite and insomnia.

This doesn’t explain why it is in the brain, though. Inflammation is our natural response to pain. People with autoimmune disorders and other illnesses have over-reactive immune systems – they get stuck “on” after the threat to the body has passed. Brains themselves have no pain receptors. But that doesn’t mean inflammation in our most important organ isn’t doing serious damage. 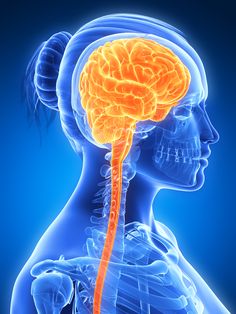 It won’t come as a surprise to people with depression and anxiety have a measurable physical component. People who insist that mental illness is “all in your head” (apart from the obvious comeback to this, which is “duh”), are provably wrong. Clinical depression isn’t psychosomatic or somehow invented. (I wish I’d had this comeback up my sleeve a long time ago).

Our knowledge now that a bunch of serotonin is made in your gut could also be a contributing factor. I know that the first place any sort of anxiety or intense mood hits me is my stomach. It hurts. I lose my appetite. I’m lucky if I don’t lose my lunch. It feels inflammatory, and I’m pretty familiar with what that feels like. When I was admitted to hospital a couple years ago after a severe stomach infection, my inflammation markers were around 400. A normal human number is 5. And yes, my depression has been much worse since then. Which makes me wonder how much of a role inflammation in the gut has to play here too.

What’s harder to determine is correlation versus causation, and what comes first – the depression or the inflammation.

A team at Duke University Medical Center discovered an association between the number of depressive episodes people experienced, and increased levels of an inflammation marker in the blood called C-reactive protein (CRP). People with autoimmune illnesses like mine often have elevated CRP levels.

Our results support a pathway from childhood depression to increased levels of CRP, even after accounting for other health-related behaviors that are known to influence inflammation. We found no support for the pathway from CRP to increased risk for depression.

They concluded that depression is more likely to contribute to inflammation as opposed to the other way around. This adds another element to the co-morbidity of mental and physical illnesses.

I’ve always been aware that when I have an AS flare, my depression is worse, and vice versa. I could never identify which comes first, which frustrates me. Even though the techniques I use to deal with them are pretty much the same – a good mixture of rest and exercise, following my diet, socialising when I can, the right amount of sleep – I want to know how to stop it from happening in the first place. If inflammation is one of the causes, rather than just a result, things like anti-inflammatory medications might be another tool I can use to fight depression.

A Danish study published in JAMA Psychiatry in 2013 looked at the medical records of over 3 million people and found that any history of hospitalization for infection was associated with a 62 percent increased risk of later developing a mood disorder, including depression and bipolar disorder.

I find co-morbidity kind of fascinating. It’s one of the things that leads to diagnoses like hypochondria and hysteria. People might look at someone with a lot of health problems and think “Yeah, right. How can they have all of that wrong with them?” I know, because I’m guilty of thinking it in the past. But it’s provable that once you have one illness, you’re more susceptible to a bunch of others. How shitty is that? It explains why I feel like it’s been one thing after another with my stupid body. I’m not making it up or blowing things out of proportion. My immune system has just gone into overload mode.

And I can’t really blame it. That’s it’s job, after all. At least research like this might help us learn how to work with it.

Could depression be caused by infection? – NPR

One Reply to “Could inflammation cause depression?”