Two attempts to pass legislation for the right to voluntary euthanasia have failed in New Zealand. It’s been a contentious issue for years. Politicians and lobby groups continue to work on changing the law.

It is  illegal to ‘aid and abet suicide’ under Section 179 of the New Zealand Crimes Act 1961.[1] The clauses of this act make it an offence to ‘incite, procure or counsel’ and ‘aid and abet’ someone else to commit suicide, with no distinction between true suicide and assisted suicide.

I’ve never had a strong opinion about it. It’s one of those issues where I can see both sides. But since I got sick, I’m finding a lot more reasons in favour. I guess that’s to be expected. You don’t care about something until it effects you.

After bipolar disorder, suicide is the leading cause of death for people with chronic pain or illness. I first read this statistic in How Does It Hurt? and it didn’t surprise me. Those of you who know me well will know it’s something I’ve considered in the past. How Does It Hurt? was the first book to make see I wasn’t alone. Its author, Stephanie de Montalk, talks about her own experience with chronic pain, and the seductiveness of suicide.She described counting pills into her palm and considering their possibilities and I cried because I’d done the same thing, and no one else had ever confronted it with the simplicity and honesty she did. It’s an uncomfortable and confronting topic. But it’s one we need to talk about.

In 2003,a survey by Massey University showed 73% of respondents wanted assisted suicide legalised if it was performed by a doctor. If done by others, support drops to 49%. The questions were:

“Suppose a person has a painful incurable disease. Do you think that doctors should be allowed by law to end the patient’s life if the patient requests it?”

“Still thinking of that person with a painful incurable disease. Do you think that someone else, like a close relative, should be allowed by law to help end the patient’s life, if the patient requests it?”[5]

In 2008, a survey carried out on behalf of the Voluntary Euthanasia Society had the response at 71%. The question read:

“In some countries, though not all, if you have an illness that results in your being unable to have an acceptable quality of life, you are legally allowed to get help from a doctor to help you to die. If you had an illness or condition which resulted in your having a quality of life that was totally unacceptable to you, would you like to have the legal right to choose a medically assisted death?”[7]

Both these surveys rely on illness as a circumstance for the right to die. I presume most people think of fatal physical diseases like cancer. I wonder where mental illness – bipolar, schizophrenia, depression – would fall on the scale. This is where the waters really get muddy. Someone in a depressive episode may not have an acceptable quality of life, and may totally believe that they never will again. I know, because I’ve been there. I also know I’m probably not in my “right mind” (not the best phrase, but hopefully you know what I mean) to be making decisions at that time, and that I always make it through. Would those people have any rights to assisted suicide? It may be worth noting the high rate at which depression is co-morbid with chronic illness.

I’m always searching for new ways to communicate my experience of illness, the realities of my life, especially to able people who can’t relate. I’m not sure why I feel the need to help others understand, but I do. Maybe it’s a defense mechanism, maybe I’m just trying to connect. In any case, it’s extremely difficult, which is the dilemma How Does It Hurt? seeks to explore. Our language around pain is subjective and limited. Recently I found a couple new graphics which I use regularly to explain how I’m feeling. 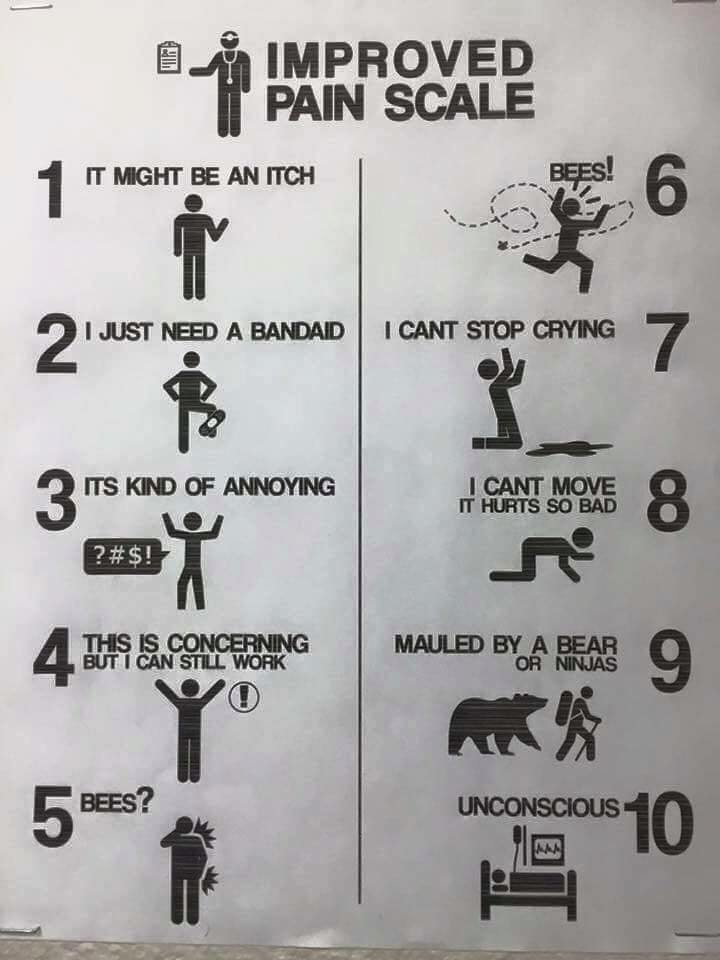 I oscillate between a five and a seven, sometimes an eight. Usually, I hover around bees. Bees has become a new word in my pain vocabulary and people around me understand what I’m saying.

This one is great because it’s not simply about communicating feelings. It’s about showing the impact of illness on my life. I don’t get above six. I obviously used to be at ten, and because of the nature of Ankylosing Spondylitis (ie, impossible to give a real prognosis), I don’t know whether I will ever get close to that again. I think a person who is usually at ten would respond to the idea of a six or anything below that with horror. I certainly did, especially when I first came out of hospital and my future was very unclear. I have adapted, but that doesn’t mean I like it. I do my best to enjoy my life and I would say my quality of life, at the moment, is quite good. But during a flare, when I can easily dip down to a zero…

My illness is different for everyone. I know a woman in her eighties who was diagnosed in her twenties. She is extremely healthy and has lived a normal life (she has children, has written at least four books) – to the point where she actually forgot she’d been told she had AS. I know another woman in her fifties who is quite often bedridden. Another who runs ten kilometers easily. Another who is unable to work. And then me.

I don’t spend a lot of time focusing on what *might* happen. But I am aware that things could go downhill and never come back up again. And in later life, my health is probably going to be shit. That’s just realistic. I may end up in a wheelchair. I may end up living in bed, barely coherent with medication just to be able to live with the pain. At that point, I really cannot say that I would deny myself the right to request voluntary euthanasia.

You could ask if it’s selfish to make that decision. I’m not going to say it is or isn’t. Whatever choice you make is going to effect everyone around you. They may want you to stay. They may not want to see you living in pain. Probably both.

In any case, it’s something that plays on ethical and moral boundaries and it’s going to be complicated. But I think it’s a question of humanity. Endless suffering is not humane.

The right to die is as much about the right to live. The right to have a certain quality of life. When that is irrevocably lost, it’s not a shocking thing that people look at their options. They should be able to make safe choices.

4 Replies to “The right to life”