If you’ve not had your head under a rock this week, you might’ve spied the new kid on the blogging block – On The Left. I’m entirely partial, but I think it’s a pretty awesome initiative and a pretty great bunch.

On The Left was conceived by Stephanie Rodgers and Asher Wilson-Goldman as a response to our both our depressing election and the lack of “accessible, well-written, interesting, and fun” writing to spark the discussion and propagation of left-wing ideas.

The OTL writers are activists, political junkies, and general lefties with a variety of interests, experiences, and skillsets. I’m pretty honoured to be one of them.

There’s going to be a wide range of topics and voices. So far we’ve had a bunch of us talking about why we’re on the left, we’ve had alpaca comics, we’ve had discussion about ISIL, and a damn hard hitting piece about violence against women.

I know there’s plenty more lined up, so check out the site and follow the Twitter to keep up to date.

While I’m doing a bit of a plug (which is necessary but always makes me seriously uncomfortable), I’ll awkwardly mention my Patreon.

When I signed up for Patreon, I was hopeful I’d get a few dollars per blog post, which would help me where the benefit falls short. It’s a platform through which people can become patrons and support other’s work through pledges.

I’m incredibly lucky to be receiving support this way. It’s not just financial for me, in fact that’s almost secondary. What it means is that people want to hear what I have to say. I feel credible. I feel like my writing contributes something. What it costs me in energy and pain to write feels worth it. 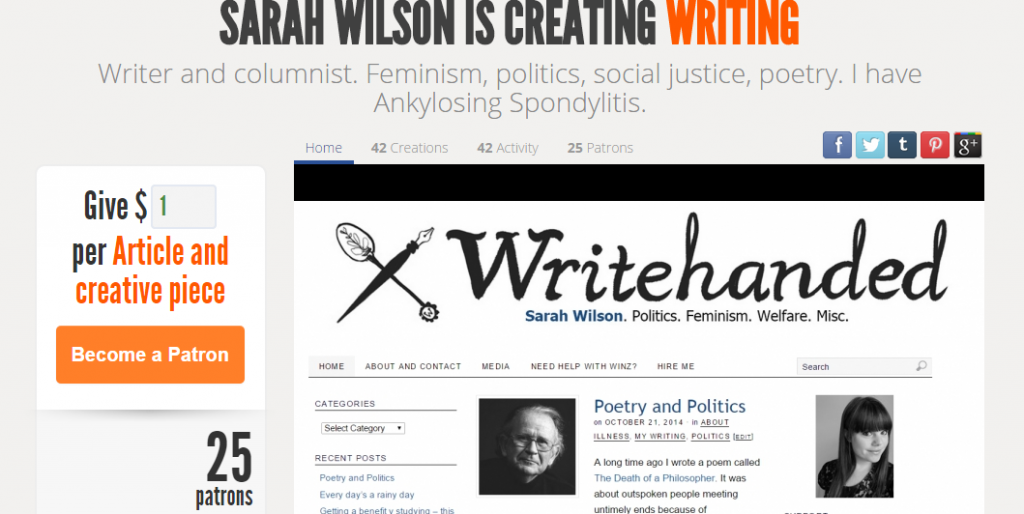 At the moment, my health is dubious, but it is allowing me to write, which I am incredibly grateful for. What I am hoping is that, with enough support, I will be able to transition over the next few months from the benefit back to fulltime work.

Patreon is helping that happen. And, honestly – the reality is, it helps me pay bills I wouldn’t otherwise be able to cope with (ref $700 cat).

So if you have a few dollars spare and would like to support the work I do here, and at On The Left, please consider being part of Patreon. You will get poetry and also my undying love. (It’s not as creepy as it sounds, I promise).

One Reply to “Introducing On The Left”