A long time ago I wrote a poem called The Death of a Philosopher. It was about outspoken people meeting untimely ends because of their understanding and articulation of political issues. The ability to get to the heart of what matters – and to tell other people – is, to me, the most important role poetry can play.

Last night, I got to say this to the current New Zealand Poet Laureate, and after that I’m pretty sure I fainted.

Vincent O’Sullivan is an unassuming-looking man who takes to the stage with a grace I can only watch with envy – partly because I am deathly afraid of public speaking, and partly because my arthritic spine punctuates my arrival in a manner which is far less than spry.

I did not want to go. I paced in my house. I was tired and my bones hurt and the thought of reading my work in front of someone so immensely influential was too much to bear. So I put on a bright red coat and took up my cane and went anyway.

In the old days I used to get drunk to read my poetry, which was both good and bad. Good for the nerves, not so good for articulation. In the absence of such, I told myself I am tiny, so no one would notice me anyway, like when Rabbit’s cousin Small goes missing in Winnie the Pooh and he is overlooked for many hours, during which he enjoys a good nap.

Unfortunately, that didn’t happen. My name was announced and I got up to read my first poem, Lencten, which is the one I wrote for you all a couple of months back. I read it because it is an enjoyable piece to deliver and because I could think of you standing there with me, giving me courage to step forward – onto the stage, into the Spring. (Lencten is the Old English for early Springtime).

Then it was Vincent. I sat captivated, ignoring my murderous spine, ignoring the smell of damp yak that permeates the Yurt where the Nelson Poetry Society meets (yes, it’s true), ignoring my nerves at having to follow this in the near future.

Vincent talked a little about politics. I will try to remember what he said, but I’m paraphrasing. I believe what he was saying was that it can be difficult, as writers, because we want to write about the news. We want to write about tragedy, we want to express and respond and communicate the depths of despair, the moments of triumph, the frustrations of an everyday political landscape.

But this can be difficult to do in an authentic way. Without usurping someone else’s tragedy. Without, perhaps, falling into easy satire.

Of course, he does it. He does it with such grace that you don’t even realise he’s doing it until he stops and the last line lingers in the air and your brain blinks on and you go “holy shit, what did I just hear?”

I, on the other hand, probably do not. But I want to. I want to with every fibre of my being, because for me, that is what poetry is really, truly about. For me, it is not about gardens and landscapes and the next door neighbour’s cat – unless that cat happens to be a pretty goddamn important metaphor.

It’s about punching people in the guts and hugging them while you’re doing it.

My poetry has been called gritty and I think that may be one of the best compliments I have every received.

Vincent’s work has been called “unsettlingly vicious” and I love this too. (NZ Listener review of his book, ‘Us, Then.’)

When I got up to speak a second time – which I hadn’t planned on doing, but I felt inspired – that’s what I had on my mind. Perhaps inspired is the wrong word. I felt like I wanted to challenge. Here was the grit.

My intention was not to challenge Vincent, though it may have come across that way. When I get on stage and start speaking, my mouth seems to wholly disconnect from my brain. I know what I want to say but I’ll be damned if I can find the words for it. Here is what I would have said if I could have:

Poetry has, and has always had, an incredibly important role to play in politics. Poets are dissenters and loudmouths. There is centuries of us, living on the margins, pushing the boundaries, being silenced, being exiled, being executed for telling the truth in a way that people can hear. Dante wrote The Divine Comedy after being banished from Florence for his politics. He spent that time writing about the possible divine consequences of human existence. 700 years later it is still considered one of the greatest words of world literature.

I told the room that I had become sick with Ankylosing Spondylitis. That was my own exile. I told them that since then, I had come to understand the true impact of politics and ideology on humanity and everyday lives. I told them I had tried to tell people about why this was so important. And then I read this poem.

“The place for politics,” says Dave, anchoring his pint with one hand and drawing a stick figure in the condensation

“Don’t get political with me” says Darren, bouncing the baby against one thigh and scooping up the last biscuit.

After the poetry was over, Vincent O’Sullivan came to speak to me. I, of course, made a complete ass of myself by trying to make a date with him in Wellington when he now lives in Dunedin. But he said he liked my reading (this is the point at which my hyperbolic reference to fainting comes into play), and that he’d like to talk to me about politics some day.

That’s something I would really, really enjoy.

Thank you for coming, Vincent. It was utterly wonderful. Please visit again soon. 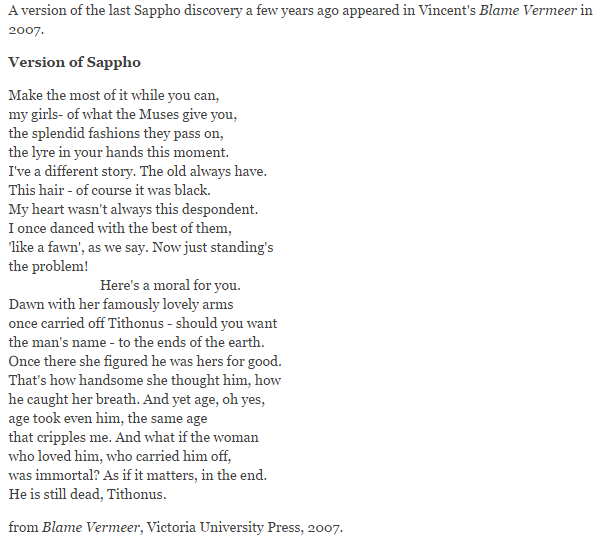 Please also enjoy ‘Only Connect,’ in which our hero discovers, and dismisses, LinkedIn.

And, to finish, my Death of a Philosopher

Socrates was inclined to ask questions
men did not want to answer, he was as a gadfly
to the thoroughbred of Athens

and when his followers gave way to grief by
his deathbed with the cup held aloft, he mocked them
‘What a way to behave, my strange friends!’

Three hundred years later Seneca cautioned against hope
the loss thereof being so disturbing to peace of mind
What then sustained him through three attempts to die?

What is not trouble when it arrives, is an idle worry in anticipation

said the pleasure God Epicurus
of all of them, he faced no death sentence
but drifted idle, glutted on thoughts swallowed and friends left unsaid.

2 Replies to “Poetry and Politics”