A couple of years ago, upon meeting an MP, I asked her how on earth they manage not to just yell at each other in the House. She frowned at me and said: “Are you kidding? That’s all we do!”

New Zealand’s parliament is pretty sedate in comparison to others on the world stage. We don’t generally break out into brawls, and the Speaker does their best to stop it all from devolving into a sea of insults.

And, on the parliamentary website, you can find a list of words and phrases that are banned from use. It’s equal parts horrid and hilarious.

There are rules about what members can and can’t say. ‘Unbecoming’ language, insults, and accusations of dishonesty are banned… This selection of ‘unparliamentary language’ is from the indexes of the New Zealand Parliamentary Debates.

Unfortunately, the list stops at 1980. I’d be very keen to see an up-to-date one, considering that “fascist dictator” is listed in 1980, along with “Marxist or neo-Marxist.”

I think my favourites have to be “His brains could revolve inside a peanut shell for a thousand years without touching the sides” in 1949, and “Could go down the Mount Eden sewer and come up cleaner than he went in,” from 1974. Very creative. Top marks.

Here’s a few others. 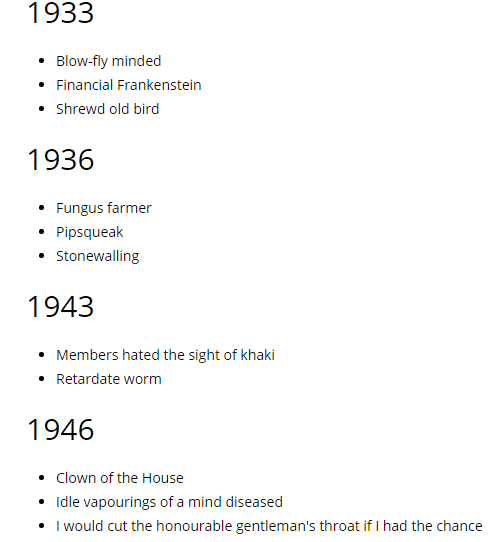 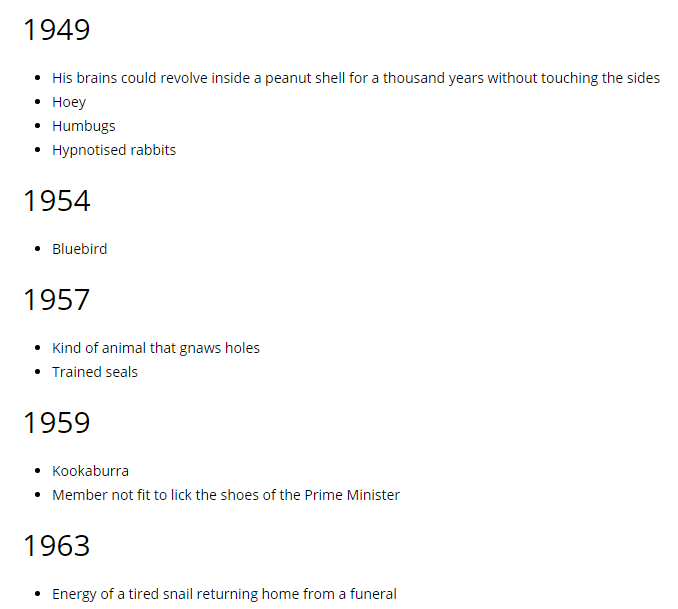 I’m also interested in the fact that apparently accusations of dishonesty are banned in the House, because I’m pretty sure I see that happening all the time. And they’re not false accusations either.

This section of the parliamentary website also includes a selection of relevant political poems, postcards, and cartoons. I particularly like the introduction to “Parliamentary Skits and Sketches,” written by Silver Pen (pen name of Mrs Corlett) in 1872:

“Wellington’s first Parliament Buildings were made of wood … which soon rotted. A member of Parliament once called attention to this by waving some rotten wood in the debating chamber.”

I wonder if rotting wood – and fishes – are now on a banned list too?

No doubt someone will point me to an up-to-date register.