“Pain is a room for one. Only we can enter, and sometimes, we can’t leave.” … But what if someone else could actually picture the pain?

I’ve written about pain a lot, but it’s kind of surprising I haven’t written about it more. Maybe it’s because I get bored of it – bored of feeling it, bored of thinking about it, bored of managing it 24/7. Maybe I don’t want to make other people uncomfortable or elicit pity. Maybe I just run out of things to say.

My dear friend Stephanie de Montalk, author of How Does It Hurt? managed to write an entire book about it. That book, a manuscript which took Steph several years to write, laying on what she calls ‘the Opium Couch,’ is part autobiography, part medical text, part historic fact, part poetry, part literary rewrite. It’s a testament to everything Steph is. I’ve written about it, and her, many times. It’s also one of the most difficult and heartbreaking things I’ve ever read, and not because I related so deeply or felt horror for Steph’s experiences – though those are both true.

It’s because Steph concludes something I knew but never wanted to hear. To be in pain, is to be alone.

De Montalk confronts the paradox of writing about suffering: where can we turn when the pain is beyond words?

I’ve been confronting this for the past eight years. One in five people are now estimated to live with some form of chronic pain, illness or otherwise. Science knows that pain doesn’t come from the place where it hurts. It’s in the brain. Which is not the same as saying it’s in our heads. It’s saying that the reason for ongoing pain when the initial trigger is seemingly resolved is neurological. When we’re poked with a pin, a signal goes to our nervous system at the base of our spine. From there, it zips up into the brain, and that rat’s nest of twisted Christmas lights and pink batts interprets the signal and sends one back telling us to move. 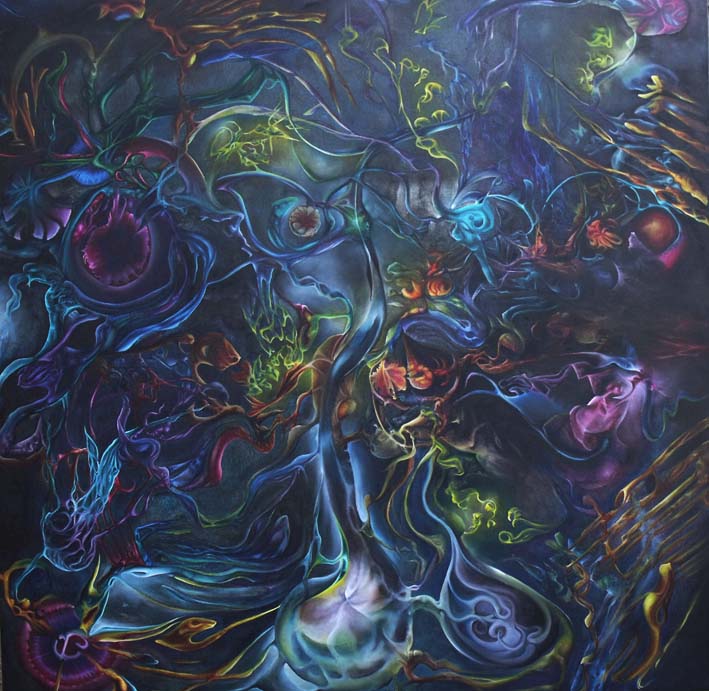 It was only when I was researching the treatment of mental health for New Zealand Geographic a few years ago that I more fully understood what science knows about the brain. The answer is fuck all.

Even the fact that that piece was focused on mental pain as opposed to physical is the reddest flag in the room. There is no part of our system that does not speak to the other; it is impossible to cleave the brain from the body. I, and every person I know who experiences chronic pain, experiences mental illness. We experience symptoms doctors describe as ‘unrelated.’ ‘There is no link,’ I’ve been told. But this is not about doctors brushing off women’s pain, which they have a long and ongoing history of.

This is about multiple medical and academic professionals informing me that, in terms of understanding the brain, we may as well be at the beginning of the universe. That, while they prescribe antidepressants with little argument, they still don’t understand how, exactly, they work. As someone who’s been a guinea pig (and pronounced untreatable) for these medications, it was more than sobering to sit across from a psychiatrist who just shrugged. But then, I’ve never got along with pyschiatrists. Doctors don’t like “untreatable.”

That’s probably a factor than contributes to millions of missed diagnoses or misdiagnoses or medical ‘misadventures’ every year. Tell me your story and watch me be unsurprised.

I’m getting sidetracked. I’m getting angry. I’m forgetting my point. I do this a lot. And I didn’t used to.

“Pain has made me dumber.”

I’ve been learning about synesthisia. If you’ve heard of it, you probably think of artists who see colours in music. It’s much more broad – there are at least 80 types of synethesia documented since doctors finally conceded it was actually A Thing. It’s defined as a neurological condition in which information meant to stimulate one of your senses, stimulates at least one more at the same time.

Some people can solve math problems through the shape of the numbers. Some people can experience time as an ever-expanding circle extending from themselves. Some people can’t look at certain objects, for example flat paper, from a certain angle, without experiencing extreme optical dysfunction – in other words, pain.

Twenty Thousand Hertz did an episode on synesthesia, interviewing a neuroscientist and five people with the condition. So did Minding The Brain, which examined why some people have this experience through the lens of cognitive science. One idea develops from the now-debunked theory that we’re born with all the neurons we’ll ever have, and our ‘neural circuit’ remains the same. We now know that we can rewire our brains in certain ways with certain stimuli. It also means if some people continue to retain neurons, they can remain linked – and some senses will stay that way.

Plenty of musicians experience this, including Devin Townsend, who functions in a space where “notes are colours and shapes.” He calls it an “unfortunate hypersensitivity” that allows him to “interpret emotions in an external way.” As Mary E Warner puts it “He fits into no particular genre; he is a genre unto himself.” Over the course of more than 30 albums, Townsend has explored what feels like every sound there is. Spirits Will Collide from the Empath album is so important to Nik and I, it was played at our wedding.

I feel Townsend’s music as a physical expression of mental pain, or euphoria.

In 2018 the musician and writer Dessa took a ‘sensory tour’ of London for the New York Times, hosted by LJ Rich, a synesthite who covers sound and tech for the BBC. LJ’s also part of a NASA program called Datanauts, working on a technique to sonify data: to communicate through melody instead of math.

“We’d be doing what LJ called “glitching.” Using an iPad, special microphones, a digital amplifier and some music software, LJ would manipulate the sounds of Brick Lane — adding reverb, echoes, EQ filters and melodies — and then share this altered audio with me through earbuds. According to LJ, the experience can simulate synesthesia for a neurotypical person. Adding music to my world could make it more like the one she lives in.”

That got me thinking. Dessa’s not alone in seeking this experience, and she’s a fucking fantastic artist who has a podcast of her own. I’ve had it saved in Spotify for months. I’m kind of allergic to podcasts, which is a bit weird because when I actually get over whatever it is that makes me literally screw up my face when they’re recommended – I actually love them. So I finally pushed play – on the episode called Pain.

The quote at the start of this is from the episode. The way Dessa narrates has a musical cadence. She’s interested in science – the podcast itself is called Deeply Human – but more than that, she wants to know about the emotional experience of pain.

I was doing the dishes while I listened to her talk to her friend Sarah, a woman she describes as having hair like Ariel, a take-no-shit attitude, and a willingness to welcome anyone in need. Probably because Sarah knows a lot about need.

She was diagnosed with diabetes at a young age, followed by years of pain doctors found inexplicable and therefore false. For her, a moment where she may not be able to breathe for 30 seconds because the striking fire in her abdomen stole her ability to move, rated only a four on her personal pain scale. 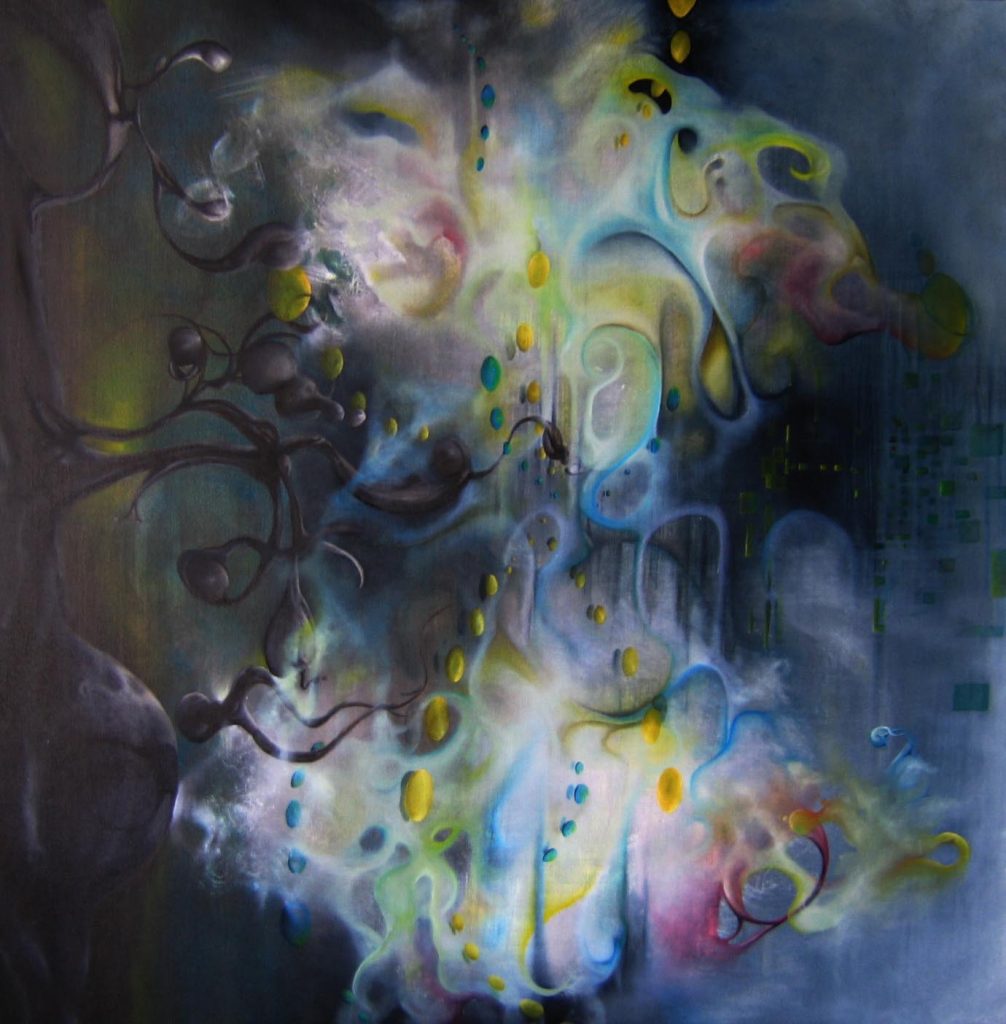 Painting by synesthete Timothy Layden. For me, evocative of pain.

Eventually, Sarah required several surgeries and was given the names of a slew of autoimmune illnesses. When Dessa asked her about living in chronic pain, she says, almost matter-of-factly, that it affected her intelligence. ‘Over the last ten years I got dumber. It makes sense – the dealing with it, the constant adrenal and cortisol fatigue from your brain focusing on and fighting the pain.’

I stopped doing the dishes and just stood at the sink and thought ‘well, for fuck’s sake!!’ – because I couldn’t have related more. I lose words. I lose the ability to conceptualize and plan. I lose whole days, sometimes. And that never used to happen.

“Pain takes away the ability to be present to the people that you’re fighting to continue to be with.”

I became aware of silent tears on my face. In all my years of trying to write about this subject, never had I heard or managed to express this fact so succinctly.

But Sarah is pragmatic. “If you have chronic pain, if it’s a given and non-negotiable, how do you want to live your life? And how do you have to change your mind, to meet the person who could live this life and enjoy it?”

I don’t have an answer for that. I haven’t changed my mind; I still try, too much of the time, to live like a healthy, neurotypical person. I’m aware of that making my pain worse – how could I not be? My body is there to remind me, every step of every day. Sitting here, typing this, my shoulders and neck are becoming excruciating. My spine feels like someone poured lighter fluid down my neural superhighway and threw a match. My butt aches. My wrists ache. My fingers ache.

It’s impossible to find the balance between accepting my illness and allowing myself compassion, and pushing through it when I can, even if the aftermath is ugly. I’ve written close to 3,000 words today. My body hates typing. It hates sitting at desks. It hates it when I hit a roll and forget to take a break and I look up and suddenly it’s nighttime and all the doors are open. But sometimes I have to tell it to shut the fuck up so I can live my life.

So how do we answer Stephanie de Montalk’s question – where we can turn when the pain is beyond words? And after this research, I have to wonder if the answer is somewhere within synesthesia. If synesthsites are ‘hypersensitive’ – are chronic pain patients not also? And how could we even begin to harness that?