I’m the first to admit that I put the people, media and even brands I like on a pedestal. Which only means they have that much further to fall when they fuck up. So what do we do about it?

The first thing to remember is that we’re all problematic. In some way or another, we’ve all been exclusionary, made an offensive joke, been unintentionally hurtful.

I’m an exhausting perfectionist with unachievable high standards for myself and everyone else – but I don’t think not being sexist, misogynistic, ableist or racist is a particularly difficult thing. Or at least, when you are, you should be able to recognise and rectify it.

Pretty much the only podcast I listen to is The Guilty Feminist. Host and founder Deborah Frances-White created the comedy show, which is now also a book and is listened to by millions worldwide, to give space to all of us who are “guilty feminists” – we’re trying, but we’re fucking up, and that’s ok because it’s human. The show’s tagline is “The podcast in which we explore our noble goals as 21st century feminists, and the hypocrisies and insecurity which undermine them.”

It famously begins with Deb and whatever guest co-host she has that week doing a series of confessions beginning with “I’m a feminist but…” Her example: “I’m a feminist but… one time I went on a women’s rights march, and I popped into a department store to use the loo, and I got distracted trying out face cream. And when I came out the march was gone.”

I love this podcast. I’ve listened to all 155 episodes, which are roughly an hour a piece, so at least 155

hours of Deborah and an inclusive range of co-hosts and guests discussing the most difficult issues, mixed with standup comedy. It’s an impressive feat; to bring all these people together, to ensure the panel represents marginalised and minority groups, and to tackle even the stickiest of feminist issues with wit and grace. Most people would never manage to pull off comedy that faces sexism, racism, misogyny, ableism and pretty much every other -ism without making horrific mistakes that alienate the very people you want to include. Yet, The Guilty Feminist fills 2000-seat theatres week after week, has millions of listeners worldwide, and has now become a best-selling book, which I own.

Needless to say, I hold the hosts of the show to an extremely high standard. For me, this is something I listen to in order to learn, laugh – and feel safe in the knowledge that no hideous jokes about domestic violence or sexual violence, race, disabled people, immigration, gun laws  – pretty much any social or political trigger point – are going to appear suddenly and wipe me out like in almost every other comedy I’ve experienced.

Feminism needs more allies, and making people laugh is a fantastic way of bringing them onside with tough issues. We’re not laughing about the issues, we’re laughing at people in power, at ourselves for the ways we participate in patriarchy and capitalism, sometimes just at the dystopian hellscape we currently live in – because sometimes we need to laugh about these things in order to cope with them.

This week, the episode was discussing sex education. Great, I’m all here for it. The co-host was Jen Brister, who describes herself on her website as “comedian, writer, actor, dickhead.” 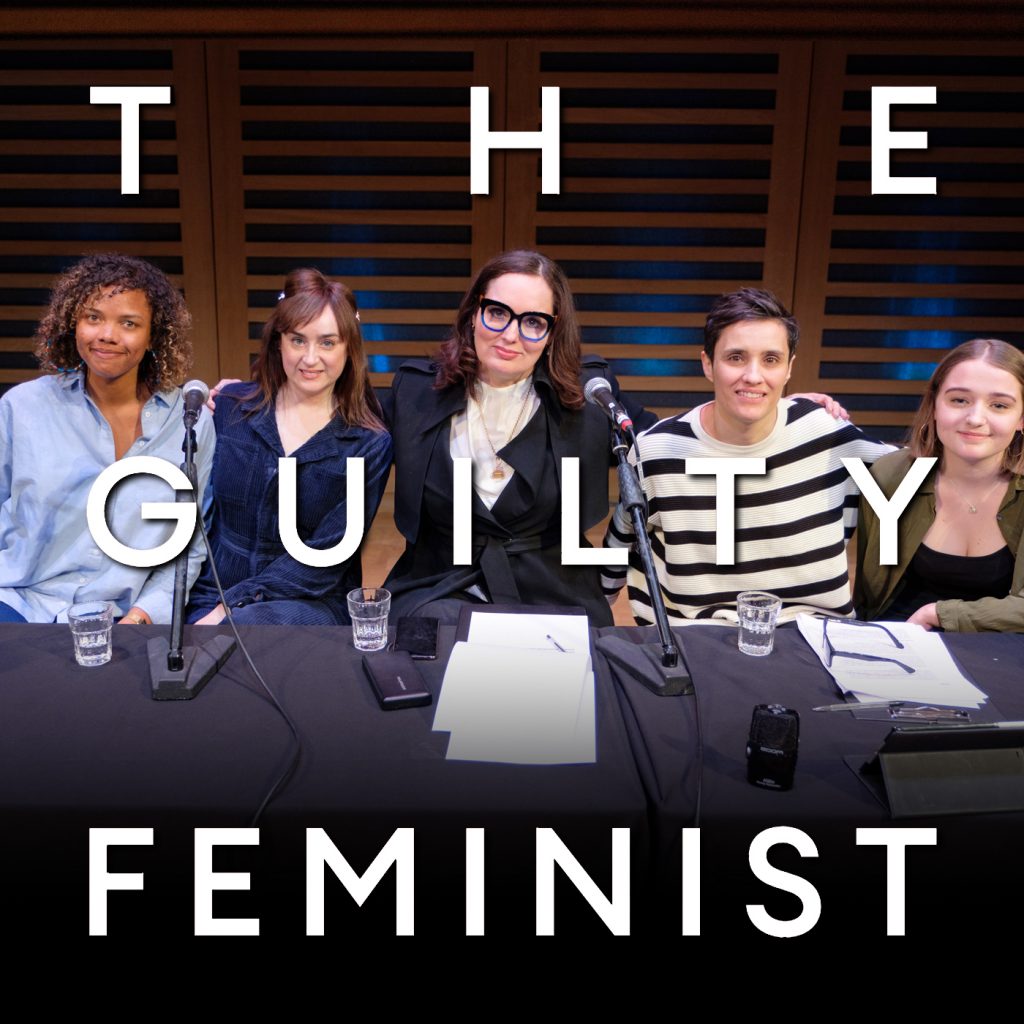 She then goes on to compare Female Genital Mutilation (FGM), an horrific assault on girls, to elective labioplasty.

Granted, no woman should feel that they need plastic surgery on their labia, but if they do, that’s their choice. It’s not the fucking same thing.

The thing is, none of this is the worst thing in the world. It’s not a rape joke, it’s not Islamaphobia, it’s not laughing at disabled people. But the whole thing felt completely off. Instead of being sex positive, it was being prescriptive about what women should and shouldn’t do, should and shouldn’t like, and has the potential to invoke shame.

The main issue is, as I said above, The Guilty Feminist is a safe place for me, and I’m sure thousands of other women, who tune in knowing that they won’t be confronted with sexism, racism, homophobia. So when there is something that feels… just off, it hits harder than it might in another setting.

This situation is different from the thing where you have a “fave” like, say, Game of Thrones, which everyone knows is problematic, and the general agreement is it’s fine to consume these sorts of things as long as you understand why it’s problematic, and you probably do it a bit more quietly because you don’t want other feminists to know you’re “guilty.” (Aside: The Guilty Feminist doesn’t encourage phrases like “guilty pleasure,” a silly backhand that is often used to shame others and is definitely a tool of patriarchy. You don’t see men calling cake or Game of Thrones their “guilty pleasure”).

So what do you do in this case, when something or someone you trusted lets you down with such a bad landing?

Again I can use The Guilty Feminist as an example, because Deborah herself has demonstrated time and again that she listens to feedback and learns. In earlier episodes of the podcast, there’s jokes that would never happen now, and some of these episodes now have an added caveat at the beginning, stating what’s wrong in the episode and why.

The people making this sort of media, unlike shitty sitcoms like The Big Bang Theory or basically any one man comedy show, is that they’re allies. They’re not trying to appeal to the lowest common denominator, because that’s not their audience or their purpose. They’re trying to learn and bring people along for the ride.

Towards this episode, when discussing gender identities, Deborah said something along the lines of “We’re not always going to get it right, but bravely having a go at it with a good spirit means something.”

So, though I continue to hold this show to a high standard and feel gut-wrenched when they fuck up, in this case, what to do when your fave is problematic is A) Let them know, and B) Learn from it yourself. The reaction I had to the jokes above made me want to be more body-positive and more sex-positive.

Feminism is about agency and choice.

If that’s not what’s underpinning yours, it needs another look.