I was never a Sex In The City gal, but even I remember the iconic episode where Charlotte gets diagnosed with vulvodynia. It’s poor representation of a misunderstood condition, but it’s something. And it meant something to me… because I have it.

I’ve written about some pretty damn personal things over the years, but it doesn’t get much more personal than getting public about your pubic zone. However, I think more of us need do it.

It is estimated that 15% of women experience chronic vulvar and/or vaginal pain at some point in their lives, and many never talk about it or seek any medical attention or treatment. They just put up with it, whether because of socialisation or stigma or lack of education, or all of the above.

When Charlotte tells the gang her vagina might be depressed, their initial reaction is to make fun of her. “Vulva-whatia???” sputters Carrie. Not exactly what you’d hope for, when sharing something so vulnerable. 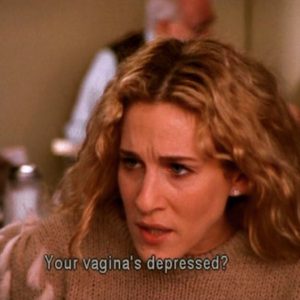 From memory (I really can’t force myself to sit through the whole episode), Charlotte’s vulvodynia – an umbrella term for a number of conditions effecting the vagina and/or vulva – expresses itself as pain during intercourse. It’s this that propels her to get help.

But these conditions can manifest in many ways – some women experience pain all the time, some when using certain products or engaging in certain activities. Some pain is mainly on the vulva or labia (the skin outside the vagina), and some goes much deeper.

It’s important to note that other conditions can cause pain during intercourse – endometriosis for one – but for the purposes of this piece, I’m sticking to what I know.

I don’t know if it’s “normal,” but before I ever had sex, I expected it to hurt. At least the first time, anyway. From my voracious teenage consumption of romance novels, I had gauged that sex would go in this exact order: some kissing, spontaneous immediate female arousal, maybe some gentle fingering if you were lucky, then the main event, which would tear through your hymen (somehow, I pictured a hymen as being far thicker and sturdier than it actually is, if it is even still present at the time of first penis-in-vagina (PIV) intercourse), causing intense but brief pain – and then, always, simultaneous orgasm caused by PIV alone.

Obviously, sex is… not like that, most of the time. Not even “standard” heterosexual sex.

I often recall talking to an old colleague of mine, following a few glasses of wine after work one day. She listened to me lament about my sex life and my belief that it wasn’t “normal.”

“Sarah,” she said to me, sagely raising her pinot gris. “Everyone, everywhere, is having all kinds of sex, and no one knows what anyone else is doing. There is no normal.”

Any time I’ve felt concerned about my sex life since, her words have come back to me, and provided great comfort.

I don’t know that describing a vagina experiencing pain as “depressed” is super useful. Sure, a person’s libido can be suppressed by depression or antidepressants, and feeling sad probably doesn’t put you in The Mood™, but as far as I know, vaginas don’t have emotions of their own. At the very least, Charlotte’s confession made viewers realise maybe this was an actual medical issue that was more common than they’d though. One would hope it lead to lots of people getting answers and hopefully assistance.

What I can say for sure is that experiencing chronic pain anywhere can make you feel pretty low – especially when it impacts on your closest relationships.

I started experiencing painful intercourse not long after I had sex for the first time. I was still with the same partner. I got diagnosed and treated for thrush – whether or not that I ever actually had it, I don’t know, but the pain didn’t ease with treatment.

So followed more than a decade of dealing with this condition. I have vestibulodynia (say that fast five times), which indicates where the pain mostly occurs. I experience it inconsistently and it can be set off by any number of things. Vaginas have flora that’s just as sensitive as that in your gut, and if something throws it out (a type of sanitary product, scented toilet paper, antibiotics, lubricant) it can respond negatively.

I saw multiple doctors. I changed partners because I figured maybe I was having sex with the wrong person. I lost relationships because people weren’t prepared to put up with inconsistent or nonexistent sex, and while in one way I couldn’t blame them, the hurt tunneled its way deep, making it next to impossible with other partners. I felt pressure to perform, which obviously made things worse.

None of that made any difference. What did was time, and finding someone I trusted who was willing to give me all the time I needed. It helps that I’m old enough now that I know my own body and I am confident enough to communicate in bed. It cannot be stressed that it is always ok to tell your partner to stop, at any time. In fact, it’s completely necessary, because even if you’re emotionally consenting to continuing, your body isn’t, and forcing it can cause damage. Your body can “learn” a pain response, which will be perpetuated by tightening muscles, meaning it takes longer to recover.

So I was distressed to suffer a relapse late last year. Again, I initially thought the burning stinging feeling was thrush, and did all the usual treatments. No dice – the pain seemed determined to stay.

Not willing to put up with another decade of this bullshit, I made an appointment with a gynaecologist. I researched extensively and wrote out the entire history for her. I noted that inflammatory vulvar skin conditions are possible, and wondered if this was in any way linked to my other autoimmune issues.

She examined me and deduced that no, this is not inflammatory. It’s a neural over-sensitivity.

“It’s kind of like a burglar alarm,” she explained. “Yes, you need it to react when something uninvited is happening… but yours is doing it when a leaf blows past.”

Even more interesting was her prescribed treatment – an antidepressant.

I was already shaking my head before she finished the sentence, not because I have any objection to antidepressants, but because I’m already on one, and I don’t need to add another pill to my list. But she explained that this is used topically – and therefore nonaddictive – and that it’s purpose was to tell the nerves to calm down.

As sceptical as I am, I also know this medication is often used for pain conditions, and the prescription is definitely not a message that my vagina is depressed. If anything, it’s too excited, a fact I find kind of hysterical.

So hey. I’m real sorry if your vagina didn’t come with leading edge leaf-detecting capabilities, but then my body has always had a tendency to overperform (thanks, immune system).

And as light as I’ve tried to make this, please don’t forget. 15% of people with vaginas will experience chronic pain at some point in their lives. That’s a lot. And we should talk about it. Because no one should have to suffer alone, as I’ve done for pretty much fifteen years.