Yesterday I walked out my back door and saw the pillar of smoke billowing over my house. The wind was coming in my direction. I barely thought. I just ran.

Nelson’s fires have been raging for five days now. The main one, near Wakefield township half an hour from the city, has engulfed 21 hectares and driven more than 3,500 people from their homes. Houses and livestock have been lost. Emergency centres have been set up and people are opening their homes to evacuees.

Nelson city, several kilometers away, has been blanketed in smoke. By yesterday afternoon I’d shut all the doors and windows in an attempt to keep the smell out. It seemed to be getting worse. It wasn’t until my flatmate messaged me asking if it was safe to come home.

My stomach turned to lead. I ran outside and saw the smoke. The neighbouring roof shielded my view so I couldn’t tell exactly how close the fire was, but I knew it was way, way too close.

I immediately tweeted my panic.

FUCK there’s a new fire in Nelson, it’s right by my house pic.twitter.com/txRh3dHCdU

Rachel Boyack, who is a friend as well as someone I’m affiliated with politically, tweeted back “Do you need to go? I can come right now.”

Usually I’d hesitate. I’m an anxious person and I prefer my own home to anywhere else, especially during a crisis. But this crisis meant my home was no longer safe. I didn’t think. “Yes please” I tweeted back, and ran into the house to find my overnight bag.

I rang someone and kept them on speakerphone while I sobbed, trying to pack, unable to think logically. What did I need? What could I possibly choose to take? How do you pack your entire home into a duffel bag in fifteen minutes?

I grabbed my medication, phone, laptop, chargers, passport, toiletries, clothes. I couldn’t comprehend the idea that I might be leaving my house and never walking back in. There wasn’t any way, or any time, to try and scoop up boxes of letters, all my notebooks, photos.

Rachel arrived and bundled us into her car. As we drove away, I stayed turned in my seat, watching the hillside behind my home burn.

Traffic was at a standstill. Rachel made phone call after phone call, updating people on the situation, mobilising help, making plans. When we arrived at her place on the other side of town, Carina and I took refuge in the study. I sank slowly to the floor.

What had I done? Should I have stayed? The roads were being cordoned off, I couldn’t think of anywhere I could stay for the night with Carina, and over here I couldn’t see the fire, could only follow media and twitter to try and understand what was happening.

I just want to go home. It’s utterly annihilating to feel like a refugee in your own city. I’m sure it’s going to be ok, I’m sure they’ll get it under control. They have to. No one deserves to lose their home. pic.twitter.com/jSd5Jx8q1p

We let Carina out in the house and I curled up in a chair, stuck to my phone with its rapidly dying battery, trying in vain to get hold of my family. (It turned out they were stuck in traffic near the fire, where a road accident had compounded the situation). Rachel worked constantly, making calls, sending emails, staying completely calm. It struck me that this is what an MP is made of. Yes, we are friends, but we met through politics, and she went out of her way to assist a vulnerable member of her community, while in the middle of helping to respond to the crisis. I envied that strength.

Eventually, late in the evening, we assessed the reports and I decided it seemed like it was ok for me to go home. Carina went unhappily back in her crate and we started the journey back through the city.

We were less than a block from my house when we watched the fire start again.

I was looking up at the black hillside, trying to grasp the destruction, feeling bone-deep relief that it hadn’t been worse, when I saw it. A flame. One that flickered once, then shot upwards.

“Rachel,” I said. “Rachel. What about- do they know about that bit?” then “Rachel, god, it’s getting bigger.”

Rachel pulled over like a character in Speed and called emergency services. In the time it took for the helicopters to arrive, the fire went from a speck to covering an area the size of a gym field. 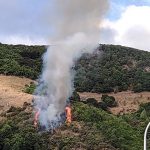 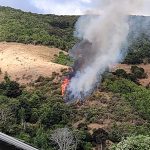 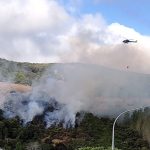 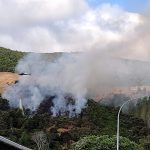 I can’t begin to describe what it felt like, sitting in the car with my crying cat and my one bag full of random shit I’d collected in panic – and watching the wind push the fire towards my house. I don’t feel like those pictures convey the magnitude of it, the sound, the smell, the horror. I finally got hold of my father, who tried to reassure me, but I was beyond reassuring. I was a refugee.

When the helicopters arrived with their monsoon buckets, I wept with relief – and fear.

“They’re too small,” I cried to Rachel. “It’s impossible, the buckets are too small.”

I was trying to capture video, but my hands were shaking uncontrollably – and the tourists parked in front of us had somehow, unbelievably, not registered what was happening behind them. They kept getting in my way as they casually packed their car. Then the man opened the boot right in my way. You can hear the start of my reaction at the end of this clip (as well as Rachel calmly calling 111).

I’m not exactly proud of what happened next, but I don’t well with stress (unlike Rachel), and at the moment I don’t think I have ever felt more stressed in my entire life. The fire was spreading rapidly. I was stranded. My nerves had been stretched so thin – and they broke.

I got out of the car and screamed at the tourists.

Their casual behaviour in the face of my town literally burning was the last straw.

I don’t remember my exact words, but it went something like; “Are you fucking kidding me??? What the fuck is wrong with you??!! Have you not noticed that there’s a fucking FIRE right behind you??! Get the fuck out of my way!!”

The woman actually had the audacity to giggle (looking back, maybe it was a nervous giggle in response to the maniacal woman screaming at her, but at the time, it was the worst she could have possibly done.) They both turned to look and went “huh” and said “yeah, we hadn’t noticed.”

I collapsed back into the car next to poor Rachel. I wondered if she was regretting picking me up by this point, but she just smiled at me.

Incredibly, it didn’t take longer than half an hour – 45 minutes? – for the blaze to be under control. I decided I would risk going home for the night, even though I knew I wasn’t going to get a lick of sleep.

And I didn’t. I had two phones, volume on the highest setting, next to my pillow. I read for hours, trying not to look at the news, waiting for the helicopter noise to finally die down. Eventually, I slept fitfully, Carina right up next to me in the bed, which she rarely does.

This morning I got up and repacked the overnight bag properly, so if I need it, it’s ready. I’ve shut the cat in. I went to the pharmacy and then dispensed my medication out. On the way back from town, while staring up at the scarred hillside, I saw another plume of smoke. It was small, but it didn’t matter. I called 111 immediately. The dispatcher sounded tired. “We know,” he said. “We’ve got people up there.” I remained on the bridge where I could watch, determined not to return to the house until the smoke stopped. After what I witnessed yesterday – how fast fire grows, how quickly it moves – I’m not taking chances.

The firefighters and emergency responders who are battling the blazes and trying to keep everyone informed and safe are doing an incredible job.

We owe a huge debt to them. Watching the pilots with the monsoon buckets fly straight into smoke and unleash water with such precision has increased my respect for them one hundred fold, and it was already high. This is highly technical work with the highest stakes possible – people’s lives and livelihoods.

When the Wakefield fire is out, and people can start picking up their lives, I want the Nelson Tasman community to come together to recognise the dedication, skill and courage of the emergency teams who have worked tirelessly to protect us.

You always hear that firefighters are heroes. I’ve never seen how true that is until now. And I’m not given to “they’re heroes!” proclamations.

I hope I can help with whatever gets organised for this – because I’m certain something must be.

We can start here:

I also want to say thank you to everyone who sent me kind words yesterday and today. It has helped immensely. When I was out of my mind with panic, your care flooded in. It meant more than I can express.

The only good thing about tragedy is the way it brings people and communities together. On that note:

HOW YOU CAN HELP

Cages for cats and dogs

I’ll update this as and when I see more information. Right now I need to try and get some things together to donate. I’m not good under stress. But having a purpose – knowing that you’re not completely powerless – that makes it a whole lot easier.

Together we can help those affected. Please, please do so if you can.

It could be any of us.