I’ve said a lot lately that I am not going to write about welfare any more. I am tired. I am so tired of saying the same things over and over, and nothing ever changing, and I know others feel the same.

I am well aware that the reason I finally got moved to the Supported Living Payment was not because it is what I am actually entitled to, but because I have an exceptional case manager.

It’s also because I am privileged – I’m white and educated, and I’m a writer with a platform who knows how to use and work with the media to apply public pressure.

Yesterday the government announced that there is a “welfare overhaul” in the wings.

The news was greeted with enthusiasm by many on Twitter… but I’m sorry. I just cannot get excited about this. For one thing, as I have written about several times, I have been personally let down by promises made by Labour, and in a wider context they’ve proved themselves severely lacking in follow-through in this area.

As much as I am a fan of Prime Minister Ardern, I found her words on the subject disappointingly weak, couched in a strong tone of ‘don’t get your hopes up.’

“By and large many case managers do an exceptional job but there are situations where you’re just left wondering why there just wasn’t the respect shown that should have been.”

Scrapping sanctions is “one of the things that has been raised”.

“We’re coming in after nine years of there being an expectation that there’ll be a singular focus on reducing benefit numbers, and of course we want people in work, we want people who are seeking work to be able to find work, but I think it’s tipped over into a space where it’s actually denying people who need help the help they need,” Ms Ardern said.

For one thing, those “situations” where no respect is shown are systemic, they’re not uncommon events. That “tipping over” is not a recent or small problem. And please don’t give me the “nine years” excuse – yes, National made changes that might be hard to undo, but the issue started long before that. Not to mention the “of course we want people in work” makes we wonder what Government I’m listening to.

The article goes on to quote the lovely Paula Bennett, whose very tone of voice feels like teeth in my spine – the sort of teeth that have venom that kill a yak in twenty seconds.

National Party social services spokesperson Paula Bennett said the Government should be careful about looking at overhauling the welfare system and she’d be “very concerned” if it was considering scrapping sanctions.

“If it’s to loosen it up and get people stuck on welfare for multi generations then that’s the wrong reason. If it’s because you want to modernise it and make it easier in different ways and use technology better then I suppose there’s some value in that.”

She said she’s happy with the state of the welfare system as it is, and wanted the Ardern-Peters to remember that “as part of any contract the state has with an individual there is a mutual obligation”.

Ms Bennett said people are only sanctioned if they don’t turn up to appointments, aren’t actively looking for work or aren’t meeting their obligations to taxpayers who fund the welfare system.

This is not the first time I have butted heads with Ms Bennett and it won’t be the last.

I wrote these tweets in response. 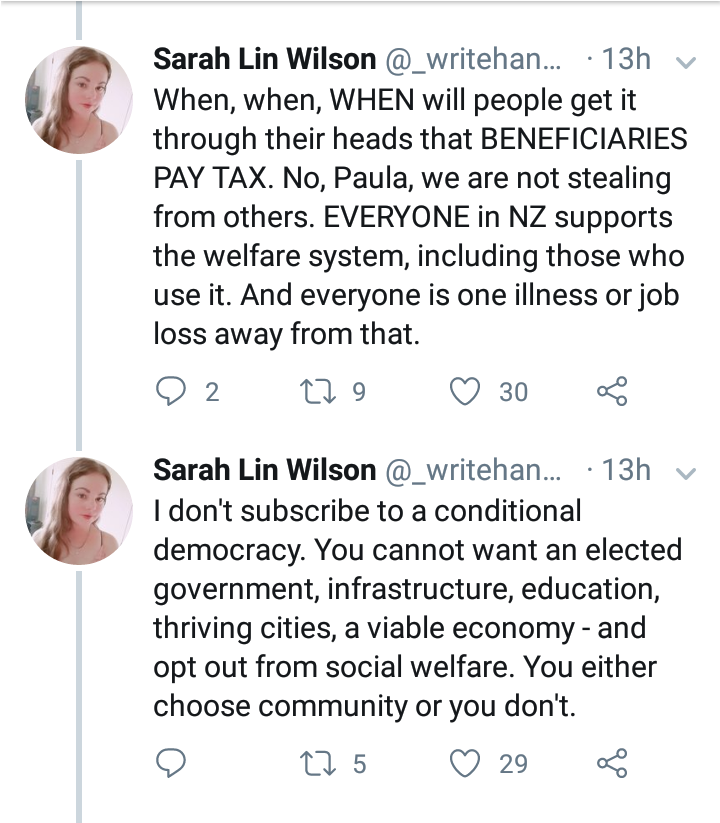 Here’s that amazing portrait in full: 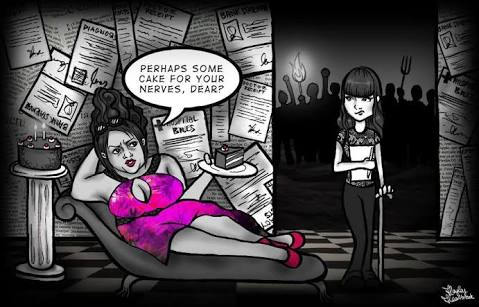 So, I will be watching the budget announcements with interest, but I will be surprised if there is much of an “overhaul.” I believe the only reason there would be any substantial change is Labour’s confidence and supply agreement with the Greens, whose platform on welfare changes was much stronger, and whose former leader Metiria Turei lost her job for this very cause.

Anything less will fail to start to address not only the difficulties people needing social welfare face, but also the cultural hatred of us that was cultivated so well by the National government.

So please don’t come expecting me to be thrilled with an extra $20 a week.

After all, no one wants us to be running off with “handouts.”