I saw The Big Sick last weekend (first movie at the cinema in several years! Usually I’m too sore). I knew what to expect, but even so, it made me have a lot of Feelings (yes, I know, what doesn’t).

The Big Sick is a rom-com with several twists. It’s based on the true story of how the writers met – Kumail Nanjiani, playing himself, and Emily V Gordon, played by Zoe Kazan.

Kumail is a struggling standup comedian/Uber driver who is trying to live an American life under the watchful eye of his Pakistani family. Emily is a grad student who wants to be a therapist. They meet when she heckles him during a comedy set.

One of the film’s many charms is it’s dialogue, which is redolent with millennial terms like “ghosting.” It’s at times hilarious, at times painfully close to the bone, and utterly believable throughout. The conversations between Kumail and Emily show that while he’s the one pursuing a career in standup, she holds her own in the wit department. Her wry lines got some of the biggest laughs. You can’t help but wonder which words were plucked from real life and which were invented for the story. Either way, I fell more than a little in love with her myself.

This review covers a lot of the other things that set this film apart. For example:

“In its own delicate way, it is exposing the everyday racism that Muslims experience in America. Some of its best jokes involve Kumail responding when he is goaded about 9/11 or accused of being a member of ISIS. The humour, though, comes tinged with frustration and even despair at the attitudes it exposes.”

It’s really good to see a story, from the perspective of a person of colour, that addresses casual racism on so many levels. Kumail experiences it from white Americans, and seems to experience his own internalised racism, as he struggles with his conflicting desire to live as an American and not disappoint the expectations of his family. You’re invited to laugh, but you’re also invited to see the pain of being in these positions.

Really though, there’s one reason I went to see The Big Sick – it’s there in the title. Emily gets sick. Really sick. And from having read about her, I knew that she as a rare form of autoimmune arthritis – like me. Not the same form. But close enough. I was so. excited. when I read the film’s plot, which is bad because obviously I’m not happy that she’s not well, but god, I don’t know if I have ever seen a movie about someone with a chronic illness like mine. In fact, no, I know I haven’t. I’ve seen movies about people who get sick, sure, or hurt or end up in hospital. But a romantic comedy about someone who gets sick and doesn’t get well and the romantic partner stays?? Unheard of.

In this review, which focuses on love and chronic illness, Kylie Maslen talks about the difficulty of dating while sick. The uncertainty, the attempts at symptom management, the awkward when-do-I-explain?, and will-they-stay?

Dating while sick is arguably even more difficult for women. From a young age, boys are told that ‘chicks dig scars’, but girls are all too often judged as crazy bitches, moody bitches, fat bitches, and asked if they’re “on their period”. Girls and women are looked down upon for appearing different in any way from the unrealistic portrayals of women on our screens.

In the murky swamp that is heterosexual dating in 2017, there is frankly enough to be anxious about without having an illness. So it’s important to me that in The Big Sick it’s Emily who is sick and Kumail that stays. While the film does fall in line with the general heteronormativity of the genre, it is notable in this way.

That was important to me, too. To see a representation of myself onscreen, who was obviously worthy of love, and she saw that in herself as well as him seeing it – illness or no.

But for me, the importance of the representation here went way beyond the romance plot. It’s so rare 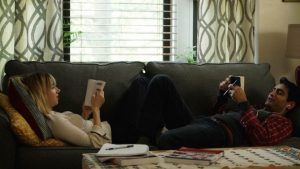 to see anyone onscreen who looks anything like me. I shed tears twice – once, when Emily was in a hospital bed, looking pale and scared and with huge bags under her eyes (yes, that’s been me, it’s still me), and then again when she walked onscreen using a cane. No one mentioned it. They didn’t need to. It was there.

Unfortunately, I feel like there’s one place where the film falls down, and this is just for me, I don’t know that it makes any difference to anyone else. But it’s quite important.

Emily is admitted to hospital with an infection. The infection spreads and she has to be put in a medically-induced coma while the doctors try to figure out what the hell is wrong with her. Eventually, they discover she has adult-onset Still’s Disease. A doctor explains to Kumail and Emily’s parents that her immune system is attacking healthy tissue. But then he says the words “She’s going to make a full recovery.” (or close to that).

I’m guessing that maybe what he means is she’s going to make a full recovery from the infection, because as far as I know, you don’t “recover” from autoimmune arthritis. 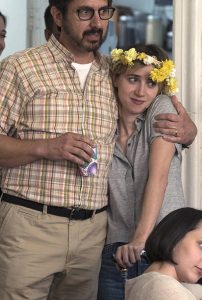 Over the next few months, we see Emily do physical therapy, get stronger, and eventually end up with Kumail.

And again I’m probably in the minority in wanting to see that, because it’s not cute and it doesn’t fit in with the tidy rom-com narrative.

The other thing I have to remember too is that Emily wrote this movie. She had say over what it looked like and what was said. So I might have had a tiny hope for something a bit more. But I can’t argue with a woman over how she tells her own life.

Either way, I just feel grateful that it’s such a popular, funny, heartwarming film and it has my illness (or a form thereof) in it, and that representation is just really huge for me.

The more airtime chronic illnesses of all types get, the better.