So what are we doing about it? Fuck all, it seems.

Recently, Imogen Dunlevie, who has endometriosis, tweeted about a study into endometriosis taking place at Sydney University.

Was the research looking at how massively women’s lives are impacted by this illness? How they cope with daily tasks when struck with debilitating pain? How it affects their interpersonal relationships?

No. It was about how men are affected.

Imogen, was rightly, well, pretty fucked off about this. Given that there’s so little funding, so little research, so little understanding of the illness that has distressed her for her entire adult life, she can be forgiven for feeling that. She wrote about the situation for The Guardian. 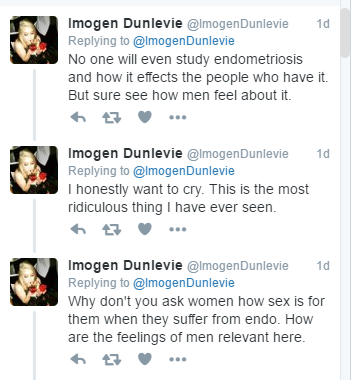 The pain is bad, but it’s not the worst part. The worst part is the exhaustion of not knowing when it will end, when it will come back and the fear of how badly it might have affected you and the ability to realise the life you want for yourself.

Thank you so much to those who took the time and spoons to talk with me for this, and to K who pulled me up kindly on my language, which wasn’t inclusive. Please remember that endometriosis doesn’t just affect women.