Yesterday, Disability Issues Minister Nicky Wagner blundered her way into a social media situation that probably caused her some professional distress. For me and many others, it was very personal.

Wagner, who was carrying out important work to do with her disability portfolio, sent this tone-deaf and offensive tweet – to which I and many others replied. 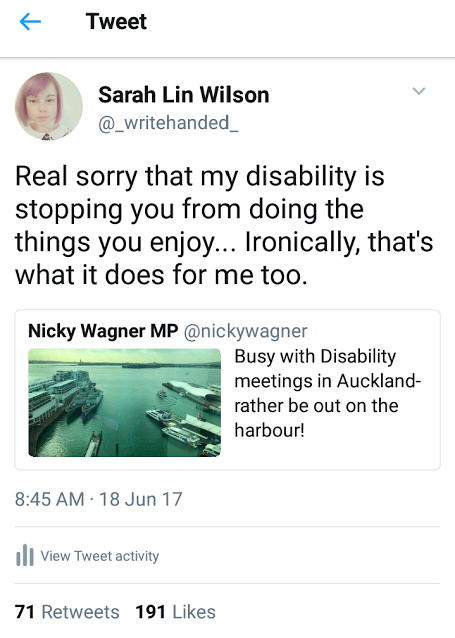 I’m not at all shocked that a National MP would say something like this. Wagner clearly has no idea what it’s like to live with a disability – or on the poverty line. As I mentioned in follow-up tweets, the harbour activities she’s referring to are inaccessible to many for more than one reason. It does strike a painful chord, to know that someone who is supposed to be representing me, can not even begin to imagine what my life is actually like. Anyone with a modicum of empathy would understand why a tweet like this stings. Yes, the harbour looks gorgeous. No one’s arguing that it’s no wonder someone would rather be out there than at work. However, for so many of us that’s never going to be an option, working or not.

And then to double down on the offence, Prime Minister Bill English appeared like some hideous knight on the horizon, dismissing the concerns of the disability community as “twittersphere outrage.”

Prime Minister Bill English told The AM Show on Monday it was just “Twittersphere outrage” and no one in the disabilities community would have taken offence.

“Those people who would be following Nicky Wagner related to her disability functions probably took it as Nicky’s kind of humour, I don’t know,” Mr English said.

Asked if he had confidence in her ability to do the job – considering many on Twitter pointed out because of their disabilities, they are unable to enjoy the kinds of activities that take place on the harbour – Mr English said he did.

“There may be a few people in the Twittersphere who don’t, but they don’t have confidence in much. But the disability sector does, and I do.”

It’s extremely offensive to suggest that this is just “Nicky’s humour” and can be brushed aside or shrugged off. A lot of people were and are hurt – not just those responding online, but those in the meetings Nicky was clearly not paying much attention to, since she was taking photos out the window and tweeting dreamily. Even more importantly, it suggests that she doesn’t have much care at all for the wider “disability sector” you refer to, which is deeply concerning, as she, again, is supposed to represent us.

As I said, I’m not surprised by this behaviour from National, and I’m not surprised by the Prime Minister’s response. I wouldn’t expect a resignation – I’d never dream of that from this government. But some recognition of the validity of our feelings about it would have been incredibly welcome. It really does suck to wake up and see someone complaining about attending meetings that will probably have an effect on your future as a disabled person, and to see them pining for something that will literally never be accessible to you. And again, I want to emphasize the intersection of privilege here, in terms of wealth as well as health. So many of us with disabilities are restricted in our capacity to earn. Therefore, harbour activities are doubly unlikely.

Good luck with getting out on the harbour, Nicky. I hope you give a thought to all of those who won’t be able to join you.