Hera Lindsay Bird was here for the Nelson Arts Festival. So I took a bunch of painkillers and drank a lot of coffee and went, because. Well. There’s no way to explain it without sounding like a lame fangirl… which I’m about to do.

I’ve been interested in Hera’s work since I read ‘The most beautiful love poem of all time’ in Turbine in 2011.

It has all the markers of the poems to come: lists of striking, weird metaphors; sincerity; exploration; confidence.

When ‘Keats is dead so fuck me from behind‘ exploded back in July, I was filled with glee. Here was something different. Something powerful. Something that looked you in the eye and raised one brow and laughed at itself and you.

Hera’s been accused of narcissism multiple times, starting with the fact she named her book after herself. Personally, I took this move to be a middle finger to the systemic sexism that insists women should be humble and never openly proud of or owning of their achievements. Hera says she did it because the book is personal, it is about her, and she wanted to give her audience permission to read it that way.

I was interested in the attendance at the event here in Nelson. Despite what a lot of people think, Nelson is a very conservative town (you only have to look at the fact Nick Smith has been our MP for over 20 years. It’s not all art and hippies). And often, poetry is considered a very conservative art – an idea that is anathema to me. Most poetry events here are attended exclusively by people over sixty (sorry, not trying to be ageist, just generally the older cohort in Nelson is the more conservative one).

Hera’s audience was a little more mixed. I figured that most of them knew what they were for in. I hoped some of them didn’t.

She opened by reading ‘Children are the orgasm of the world.’ It’s not one of my favourites in the book but there is something about hearing the artist read their own work that gives it an entirely new quality.

She also read ‘Bisexuality’ and ‘Having already walked out on everyone I ever said I loved,’ which are favourites.

To be a woman to a woman, is a female double-jointedness

Your heart a black salt lick, in an elk-laden pasture

To be bisexual is to be out of office, even to yourself

Like a rare sexual Narnia and no spring in sight

Deep in the winter coats, a little snow starts falling…

So much to relate to.

‘Ways of making love’ hadn’t jumped out for me in the book either, but this particular section shook me hard when she read it:

It’s like crying over spilled milk before it’s out of the cow.

and immediately begin adjusting to your new lactose-free existence.

I was like ‘that’s me though! that’s what I do! self-saboteurs unite!’ Which is basically what I look for in poetry, and one of the many reasons I love Hera’s. Because it feels like she’s giving voice to feelings I have but have never been able to articulate in such a particular and peculiar way. 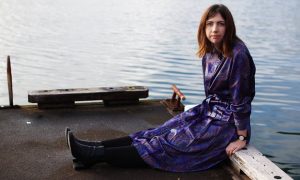 After she’d read some work, Hera answered questions from Thomas Pors Koed. She was enviously calm and confident in the face of fairly complex and at times confrontational lines of inquiry. Not that I wanted her to stumble – quite the opposite. I’m just amazed at the poise she has, someone who’s my own age (or younger even?), who’s sitting there with this incredibly vulnerable book in front of her and taking questions like “What is the opposite of poetry?”

(To which she frowned a little, looked at the audience, shrugged and said “Um… It’s obviously a beachball in a lagoon at midnight.”)

She took opportunities to critique literary culture in New Zealand, which I think is fucking brave considering how small it is, and how you can really stab yourself in the foot.  “I hate almost everything about poetry except poetry itself,” she shrugged. When I asked her how she responded to criticism of herself and her work, she said “So far it’s only come from where I knew it would come, where I totally expected. So it doesn’t bother me. Some people have gone as far as to write parody poems. I get quite a few messages that are just lines in Latin? I actually think that’s hysterical.”

“I do periodically get messages from elderly British people who think I’ve killed T.S Eliot and am responsible for the death of all modern poetry which is unfair because T.S Eliot died of emphysema I think, I don’t know, I’ve never been to Britain.”

She also poked at the idea that poetry needs to be this extremely closely edited and streamlined thing, which is how it is often taught. “I’m not a minimalist in any area of my life… You can edit everything out but what have you got left? A beautiful clothes horse.”

– From an interview with The Spinoff.

She credits standup comedy for a lot of her inspiration – mentioning Stewart Lee and Tig Notaro – an influence that is seen clearly in the humour in  her work. She says the book took five or six years to write, marked by annual inquiring letters from VUP’s Fergus Barrowman, until she finally set herself a deadline.

“I find terror a really good way to write. I’m trying to get better because I don’t want it to be another five years til my next book comes out.”

After the reading, I line up to get a book signed, and she recognises me from the internet, which gives me a moment of pleasure – quickly doused when she asks me how my own book is coming along. I stammer some excuses. The book exists only as a series of memos in my phone and Word docs called things like ‘Work in progres11’ and ‘Zephyrs. Occam’s Razor. Hedgehog principle??”

I can’t remember the exact wording of the question, but one last answer stuck with me. When Thomas said something about whether writing a poetry book was a “right-sized reaction,” Hera replied; “There is no right-sized reaction to the world. The world is weird. What would an appropriate reaction even be?” 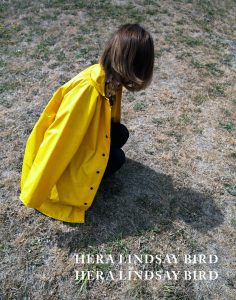 Other reviews and interviews:

‘Writing about sex and love is juvenile? What else is there?‘ in Vice.