I wanted to share a couple of things from Dr Mike Joy’s RADtalk for LitCrawl. After he spoke, the room felt like it was in shock. Basically, New Zealand’s environment is way, way more fucked than we think it is. Like, totally fucked bro.

There’s no way I can do this justice the way that Mike did, so if you want more information look at the Freshwater For Life site and get his book, Squandered: The Degradation of New Zealand’s Freshwaters.

In ten minutes, Mike completely undid everything I thought I knew about New Zealand’s environment. I mean, I knew that 100% pure is bullshit, but I didn’t know just how much bullshit. 100% bullshit. Shit being half the problem.

On paper, it looks like the government and the Department of Conservation is meeting their environmental targets and making progress. In reality, all they’ve done is shift the goalposts. What was considered unacceptable toxicity in rivers before, they just reclassified to make it acceptable. And they’ve done it over and over in so many different areas. It is literally horrifying.

Here’s some of the things Mike shared. 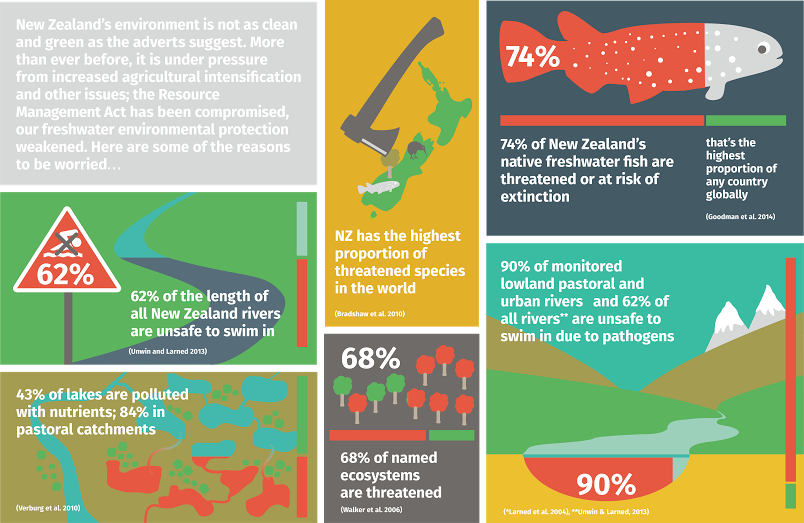 The highest proportion of threatened species in the world. What the fuck?? I know it’s overwhelming, and it doesn’t pack the same punch here as it did when Mike delivered it, because he’s a badass. But really, I mean basically, it adds up to a couple things.

– Farmers are fucking selfish. If they didn’t put the chemicals in the land in the first place, the government wouldn’t have to spend millions of taxpayer money removing it. Mike said it would cost each farm $6,600 not to put the chemicals in the water, and it costs $240,000 to get the same amount out. That’s just madness. The farming industry is bullshit.

– The government is, surprise, lying to us, and

– The environment is FUCKED. And we’re not even being given the knowledge, and much less the power, to do anything about it.