I often ask myself why I bother blogging. Who reads it? Does anyone care? I guess the answer is, I do. I need a place for my thoughts, and if those thoughts happen to help someone else, I consider that a massive bonus. Today, I had a breakdown in a stationery shop. It’s kind of A Story.

I don’t have a plan I follow here. I don’t have an agenda, other than the desire I have always had, which is to give others a glimpse into the realities of life with chronic illness. That’s what I wanted to do from Day One. To expose the real fleshy raw bits of disability, the things we don’t like talking about:  like what living on a benefit is actually like; like the way you get treated when you have a disability; things like how your physical health effects your mental wellbeing. Things like the every day, eternal, mundane fight with medication and symptoms and flawed bureaucratic labyrinths like WINZ and the New Zealand health system.

I’ve had a rough couple of weeks. I have a problem with insomnia and nightmares. Things that help my pain and/or help me sleep – like codeine and quetiapine, for example – only make the nightmares worse. So, do I stay awake most of the night then manage a few fitful hours, or do I knock myself out and live in fucking horror?

Lately I’ve been choosing the former. I’ve been trying to take less codeine, even though it’s one of the few things that takes the edge off my pain. I was hoping that the nightmares were mostly opiate-related, and with cutting codeine, I’d be able to get some rest. So far, that hasn’t proved the case. I stopped the quetiapine too, and suffered through withdrawal symptoms from both. The only thing helping me get any sort of sleep is a mixture of gabapentin and clonazepam.

My psychotherapist often talked about ‘vulnerability factors.’ I think I might have written about this before. The more vulnerability factors you have, the more open you are to depressive episodes. Lack of sleep and chronic pain are Vulnerability Factors Numero Uno. If your body is already run into the ground dealing with pain, and your brain is struggling to function, you’re going to find everyday tasks substantially more difficult.

If you add into this the fact that I have been away from home for three months, my course has now come to an end and I don’t know what the fuck I’m doing next, I’m torn between two cities I love very much, I’ve just found out I am getting a new case manager at WINZ (those of you who have been following me for a while will know this is a Big Deal), and I’m bowing deeply under the weight of expectations – it’s not really surprising I had a very embarrassing and very public meltdown today.

Here’s the contradiction with all this writing I do – I don’t actually like people to know my weaknesses. I would much rather be the picture of Disability Inspiration (yuck), especially when it comes to mental health. I would like people to think I’ve never had depression. That leaving the house doesn’t make me anxious. That I am totally confident in my body and my work and my sexuality. Unfortunately, none of that is true. And how can I fight the stigma that makes me want to lie about myself, unless I stop lying?

Today I had to go to Warehouse Stationery to print the Portfolio that is the culmination of my work here in Wellington. You can probably understand I’m pretty protective of it. The woman behind the counter was nice enough, but brusque and tightlipped. I asked for the folio to be printed on some nice paper – I don’t know what the technical terms are. She threw a book of samples at me. I requested two copies and asked for them to be stapled.

The store was busy. There were people lining up behind me and my flatmate was waiting for me. It was taking what felt like forever and I got more and more anxious. $18 later, she handed me the sheets in a bag. As I walked away I realised they were unstapled. I had to go back and line up again.

I don’t know what it is in my nature that makes me feel like I am Being A Problem when I ask for customer service. I’m sure I’m not the only one? Anxiously, I waited about five minutes while she served the person in front of me. Then I kind of whispered (and I hate how pathetic I sound in these situations) ‘Hello, I asked for these to be, um, stapled, I wondered if…?’

‘Here you go’ she said, handing me an industrial sized stapler and walking off.

But, unfortunately, I couldn’t. I was too weak – arthritis, I guess, getting in my hands – to get the stapler to push down hard enough, so the staple got stuck halfway through the pages.

… I burst into tears. In the middle of the busy store. And not quiet, contained tears. Sobbing, gasping, snotty tears, the kind you never ever want anyone else to see. I felt fucking ridiculous.

The woman who was next in line came over to help, bless her goddamn heart. She pulled a hairpin out of her bag and managed to ease the mangled staple out. Of course, my pretty portfolio now had holes in it. But she was able to get the next staple to go through and it looked ok.

At this point I totally could – should – have called my flatmate over. He would have supported me. But I didn’t want to be “a problem.” I was hoping I could get myself together before he saw me like this – which is not a reflection on him At All.

The woman who had originally served me had by now caught on that there was an issue. She came back over and tried to staple the second copy. After several attempts (so maybe not my arthritic hands at fault after all?), she had totally mangled the pages, so she went to print off another copy.

By now the line behind me was restless, and – you guessed it – I was still crying. I couldn’t seem to stop. The customer service person came back with the second copy and managed to get the staple through. By now the whole thing had taken about half an hour. My face was red and raw. Weirdly, one of the worst things was that the screen showing what I was printing was facing outwards, so everyone in line could see it. It had my name on it and I just felt this huge sense of exposure and humiliation. I kept trying to stop crying. Finally, my folio was in my hands.

The woman who had given me her hair clip asked if I was ok. I whispered ‘yes. thank you so much.’

By the time I got to the car I broke down in massive, wrenching sobs. My flatmate just sat and hugged me. Just honestly, the worst thing for me is not being able to hide my depression from everyone, especially a whole bunch of strangers in a public place. Actually, just from anyone really. I don’t want anyone to know that this is what it’s actually like. I want people to think I’m Wonder Woman.

Which, again – why am I writing this, then? Why am I resharing the experience, when I could keep it to myself and no one else would ever know that I had a breakdown in the middle of a fucking stationery shop over a totally minor thing.

I guess the thing is: I know I’m not the only one. I know other people feel this. I want to reinforce for myself, and for anyone else who needs it, that it’s not your fault when your Vulnerability Factors add up and get on top of you. It happens. It’s not weakness. It’s just human.

I also I wanted to say that people were kind. As much bullshit that goes on, as much fighting and hatred and ableist shit that I have to put up with – people are so often kind. My father used to play that Jewel song to me about having small hands, but them being your own, so you can choose what to do them with them and you can say that you will not be broken. It has a line it it – in the end, only kindness matters. That’s something that means a lot to me.

I guess I’ll end on that. 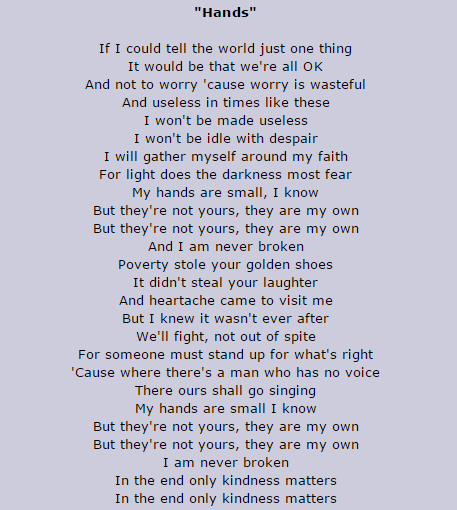 One Reply to “Tears, me, and Warehouse Stationery”