I was part of an article by Naomi Arnold in the Sunday Star Times about the power of Twitter. I wanted to say a few more words about it.

Twitter’s been a big topic today, both online and at the Auckland Writer’s Festival. Is it good for us as people? It is good for us as writers? These are important questions to ask. There’s two sides to every story. 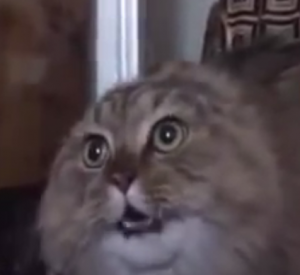 Don’t get me wrong; I love print media. I am incredibly sad that print media is enduring a slow, painful decline (although I am of the opinion that that particular ‘demise; will never be complete). But I absolutely disagree with the idea that you can only make or begin a career out of writing in print media. That’s clearly ridiculous. I’m a case in point. I’ve barely had anything in print. Ok, so I might not be exactly making a career yet (if you define career by supporting yourself entirely through your writing), but I’ve made a lot of progress. And part of that is due to the many and wonderful people I have met through Twitter, especially writers and literary folk I probably never would have known otherwise.

Here’s the article in the SST: (you can also read it online). 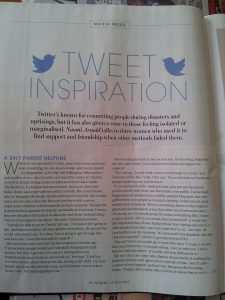 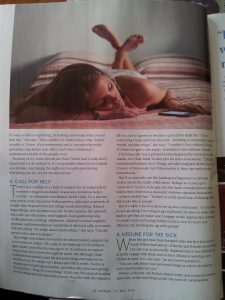 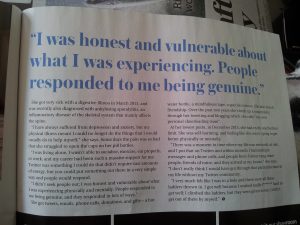 I think Naomi has done a fantastic job of telling some of my story, especially because we talked for aaages, and she has such a knack for exposing the most vital organs. But there’s a few things I want to say about this:

At her lowest point, in December 2013, she had really reached her limit. She was self-harming, and feeling like she wasn’t gong to get better physically or mentally.

There was a moment in time where my life was seriously at risk, and I put that on Twitter and within seconds I had multiple messages and phone calls, and people from Twitter rang other people, friends of mine, and they arrived at my house,” she says. “I don’t really think I would have got through that particular time in my life without my Twitter community.

“I very much felt like I was in a hole and there were all these ladders thrown in. I got well because I worked really f******* hard to get well; I climbed the ladders, but they were given to me. I didn’t get out of there by myself.

I don’t often talk about my mental health on Twitter  – or anywhere – any more, because of the huge vulnerability that comes with that. People close to me know what I went through, what I still go through. I guess there’s a few points I want to make here.

1. Twitter can be a safe space to talk about personal things like mental health when you are in a vulnerable space – but it isn’t always. You can become reliant on it for reassurance (I have done this) or you can be attacked by others who don’t understand or empathise. (This has happened to me many times).

2. Twitter – or anywhere online – isn’t an alternative to actual treatment, so I hope no one read my piece in that article and thought that. If you are struggling with your health, do your best to see a doctor. Asking for help might be the hardest thing you’ve ever had to do – but it might also be the best. None of this was about other people fixing things for me, no one could do that but me.  The ladders were offered to me, and that was amazing, I was and am so grateful. That is a privilege that not everyone experiences, and I recognise that. But there are mental health services in New Zealand (even if they are severely underfunded), and there are ways to climb.

3. One thing I feel is that, that night when I said those words to my Twitter community – that wasn’t a fair thing to do. It made people very upset and scared. It saved my life, but if things ever come to that again, I hope I will call family or a professional. For me, reading other people’s heartbreak is heartbreaking for me, and I worry about doing that. I have to remind myself that people can choose to read what I write, or not, and I often add trigger warnings to help that decision. Their self-care is just as important as mine.

Let’s go back to to those starting questions.

Is Twitter good for us as people? Yes and no. As Naomi’s story illustrates, it can be a lifeline, it can literally keep people from the brink. But it can also be an unsafe, unkind, unhappy place. It’s all about how you use it and how you protect yourself. For a sociology point of view I think it’s absolutely fascinating. I have a massive community of people who are intimately involved in my everyday life – and many of them I’d never know on the street.

Is Twitter good for writers? Again, yes and no. It’s another distraction – but we’ve always had to manage that. Log off. Write in a notebook. Use Pomodoro. That alone is not enough of a reason to stop using it. What it does do is connect people. It builds communities. It brings people into existing communities they otherwise may not be part of, for whatever reason. It gives us ideas. It airs our brains. In the same it is sometimes utterly necessary to go for a walk, to be out in humanity, before one can write – sometimes it is utterly necessary to check Twitter. To see what the vibe is today. What’s new? What are people angry about? How are your friends doing? What it’s like outside? (some of us don’t get out much).

Naomi nailed it. Twitter was a lifeline for me, the people I meet with there are indescribably cool, and it continues to be a wonderful platform for many things in my life.