Let’s be honest. I needed a kick in the ass. I asked for one, and I got… lots. So that was pretty good.

Steven Pressfield’s ‘The War of Art’ was recommended to me by a friend when I shared how my writing was suffering because of my utter lack of discipline. Here’s how the book starts.

How long did it take me to sit down and start this article, even though I wanted to and I knew exactly what I wanted to say and how to say it and I’m excited and happy about writing and sharing it?

Two hours during which I did basically nothing productive apart from get angry at strangers on Twitter and drink too much coffee.

Two hours during which I could have had the thing done and dusted and be on to the million other writing projects in my To Do List that are less-than-gently clamoring for my attention.

Esquire called Pressfield’s book “a kick in the ass,’ – and it delivers.

I was dubious about that subtitle – “Break Through the Blocks and Win Your Inner Creative Battles.” I have a gut reaction against new age self-help proclamations.

But it sounded enough like what I was dealing with to make me push through, and it’s not a massive commitment of a book. I read it in two days (over to you whether this was just another procrastination method).

Pressfield talks about the force that stops us from sitting down and doing our work, whether that be writing or any other pursuit that we want to follow but for some reason just cannot seem to get started.

“Resistance cannot be seen, touched, heard, or smelled. But it can be felt. We experience it as an energy field radiating from a work-in-potential. It’s a repelling force. It’s negative. Its aim is to shove us away, to prevent us from doing our work.”

Our “creative battle” is against this Resistance, which presents itself as:

All of this was sounding pretty darn familiar to me.

What do you need to beat Resistance? Pressfield has a few ideas. He talks about the critical differences between being (and calling yourself) an amateur or a professional.

“Someone once asked Somerset Maugham if he wrote on a schedule or only when struck by inspiration. “I write only when inspiration strikes,” he replied. “Fortunately it strikes it every morning at nine o’clock sharp.

Resistance hates professionals. Professionals seek order, treat their art as a craft, dedicate themselves to mastering technique, act in the face of fear, accept no excuses, does not hesitate to ask for help, does not take failure personally, recognises limitations and self-validates, and endures adversity. 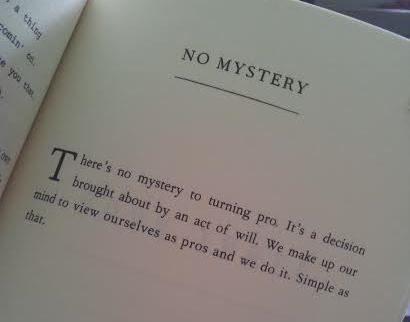 The first two chapters of the book were the most useful for me – defining Resistance, and learning tools to combat it. The third explores the concept of muses and takes a more spiritual angle. Perhaps it is arrogant of me, but I don’t really believe in “muses” as such. Do creative people have some sort of invisible “help” that drives them? Maybe? Probably? But my mind is more happy with the word inspiration – and as Somerset Maugham says, you have to be at your desk for inspiration to find you. And that’s all down to you.

My Nelson Mail column this week – ‘Writers have lives, not careers’ – inspired some discussion about what it takes to be a writer and make art. I had shared the following exchange between my writing mentor and an aspiring poet.

“A woman arrived in my office with a manuscript. It was poetry.

“I explained to her that we are the guild for screenwriters.

‘No,’ I replied, ‘they bring it on themselves.’

She stood up smartly and said: ‘Grow a soul!’ to which I replied ‘Write to the edge of the page!’

“As she backed out of the room, yelling ‘Soul!’ I hollered back ‘Paragraphs!”‘

I thought this was hilarious. Not because I didn’t identify with both parties – I do – but because it was such an accurate depiction of what happens in my head all the time.

Writing needs soul. Without it, it’s just words. It also needs paragraphs, because without that, it’s nonsense. And I mean “paragraphs” loosely – what I really mean is structure. The work doesn’t have to literally go to the edge of the page – but metaphorically? Technically? Emotionally? Hell yes.

Anyway, this book helped me identify where I was in the war. What were the things keeping me from the edge of the page – or even the edge of the freaking desk? And how can I change the pattern? Now I know have some weapons. I just need to start using them.