Aside from being a spectacular 80s feminist anthem, and something of a war cry I have recently adopted, this retaliation unfortunately also appears to be WINZ’s attitude towards the New Zealand public.

I’ve been thinking about the fact that everyone knows WINZ is impossible to interact with, from policy right through to frontline staff. And I do mean everyone. It doesn’t seem to matter what their walk of life, their job, whether they’ve had the misfortune of having to deal with WINZ themselves – everyone knows they’re terrible. Everyone has a horror story.

Which makes me furious. Why, as a public service which is funded by our taxes and exists to help us, do they consistently get away with being so poor? In any other company, people would be fired if they lost documents, breached the privacy act, made customers cry, and gave advice that is blatantly inconsistent and self-serving. And yet, with WINZ, we’re supposed to accept that’s the way it is – because that’s the way it always has been.

This goes beyond the government of the day. The stories people have sent me of their terrible experiences with WINZ extend over  three decades, with little change seen regardless of who’s in charge.

Yes, the most recent welfare reforms under a National government have done nothing to improve the situation, but I don’t believe the fault lies there alone.

Again and again, it comes back to culture. WINZ is a public service, and accountable to the public. If the loud majority are pointing the finger at the beneficiary stereotypes, rather than the system, then that’s where the onus stays. We need to turn the finger around.

Speaking of ‘accountability’ – I’m doing my year-end accounts right now. I’m incredibly lucky to have an accountant who knows what he’s doing, because I’d be getting nowhere fast on my own.

I found it very interesting that, during my last WINZ meeting, my case manager repeatedly praised me for working as and when I can. She made it very clear that WINZ responds to me more positively because they can see I’m doing what I can to get well, support myself, and get off the benefit. She said: “Some work is better than none at all!”

(A part of me thought; why? Why do we value work so highly? Is it really better for me to be pushing myself into doing work, which makes me more ill, rather than just focusing on resting? Wouldn’t I get well more quickly if I wasn’t doing this? But that’s an ideological discussion, really).

So, in theory, if WINZ says: “Some work is better than none at all!” – you would think that they would want to encourage me in this endeavour. Like, for example, the ‘work bonus’ some beneficiaries get as an incentive for working when they don’t have to. (Yes, you heard me).

Unfortunately, that’s not how it works out for me. I find numbers impenetrable at the best of times, so when you combine them with accounting and WINZ and IRD’s confusing network of conflicting policies, I’m at sea. Like I said, I’m lucky to have an accountant to provide definitive answers. I don’t want to go into specifics, but being a part-time self-employed ‘Jobseeker’ beneficiary who receives periodic donations for creative work and is really trying to make sure she does everything perfectly above-board and legally is Really Bloody Difficult.

Suffice to say: I’m allowed to earn up to $80 p/week. WINZ removes .70c for every dollar above that from my benefit. Which is fair – if I’m earning the money, I theoretically don’t need it from them. But if you’re struggling to live, or are hit by a sudden large bill, or if you’re just trying to put something away for the future – well, that doesn’t seem very helpful. Why would you work harder, only to have the money taken away? I mean, that’s not what actually happens – they deduct a little less than the equivalent from your benefit – but that’s what it feels like. It’s like digging a hole out from under yourself. It’s impossible to make progress.

I’ve been getting every-so-slowly more well, so of course I’ve been pushing the boundaries of that and trying to work. I’ve also been really stoked to receive donations for my writing. WINZ counts these as income, so unfortunately they reduce my benefit accordingly. This is pretty… demoralising, I have to say. Like I said, I understand it. The policy makes legal sense. But I’m a person, not a profile on a piece of paper. And I’m just expressing that that makes me feel sad.

So it’s a bit of a catch 22. I can see why some people work, and don’t declare the income to WINZ. They probably desperately need that extra money, because we all know that the benefit is not enough to live on. (If you don’t believe me, look at the figures. Could you continue your life, if your income got cut to this?) And because they might be trying to save, which is not something WINZ allows you to do (savings are cash assets, and your benefit will be reduced accordingly because you’re expected to use that resource for immediate needs, even if it was set aside for a future bill).

Anyway, like I said. Accountability. I’m doing my best to be absolutely accountable to WINZ. I declare my income as required, I work with my accountant to make sure I’m doing everything legally, I have a constant email chain of questions to my case manager. All this angst shouldn’t even be necessary, but I’m afraid of ending up owing money because of some policy I didn’t know about. Wouldn’t want to get a reputation… 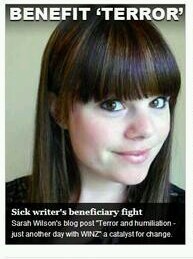 After all of this… it’d be nice to have some accountability back.