By the time I finish writing this, Part Two of Patrick Gower’s documentary On Weed will have aired. I have watched Part One, which focuses on medicinal cannabis, about five times now. Every time, I cry.

Like many, I have a personal stake in the political battle around cannabis – a battle which should be close to non-existent, and fall solely in the sphere of health management, medical expertise, and scientific research.

Patrick Gower has made a sacrifice for this cause – the progress of medicinal cannabis law and industry in New Zealand. He put his personal story, his vulnerability, on screen, knowing the impact that would have. I know acutely what a toll that can take – to use your own pain because you know that it’s a vital part of the conversation. Me most evenings. Image by Lisa Sterle.

I don’t know where to begin thanking Paddy, director Justin Hawkes, Newshub, and the team that have laboured to create a documentary that is accessible, engaging, educational and deeply emotional. I think you’d have to be completely devoid of empathy to watch Paddy’s story, Scarlet’s story, Rose’s story, without feeling the rising conviction that something is really, really wrong with the way we treat cannabis right now.

This conviction is one Paddy – who went into making the documentary with an open mind and not knowing much about medicinal cannabis – has now arrived at.

“If something helps with pain relief, and cannabis does, it should be an option. We need more research on it, but to me, well-regulated, pharmaceutical medical cannabis is a no-brainer.”

Paddy, who lost his mother to lung cancer a few years ago, travels to Hollywood to meet actress Erin Cummimgs, who filmed Spartacus in New Zealand, and has also had cancer. 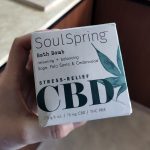 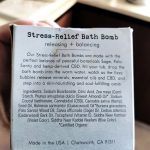 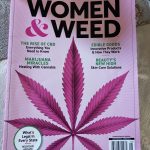 A couple of interesting things a friend brought home from California. (click to look closer).

Erin says cannabis is not a cure, “But it turned down the excruciating pain, this pain that was like my arm bone had become a lead pipe that someone had put in a fire. It turned down the noise of the PTSD.” She looks at Paddy and shakes her head. “People not having access to this… it almost seems barbaric.”

Paddy, in tears, confides in her how his mother died, and how he feels he should have done more to ease her suffering – he should have researched cannabis products.

“It would have made her life better, I know that for sure now,” he says.

The government is still letting people down.

Every day, it makes criminals of women like Scarlet, whose illness had her bedridden, in pain that felt “like fire in my blood,” unable to be a mother to her young son. Scarlet was prescribed Tilray – CBD drops that cost $700 for three weeks’ worth.

“It. Worked.” Scarlet’s statement is stark and raw. “I have not had one day in bed since I started taking CBD.”

Scarlet, unable to sustain the cost of the Tilray, went searching for other options – and found Rose.

I’ve followed Rose Renton closely since she lost her son Alex in 2015. She has campaigned tirelessly for the legalisation of cannabis. “It heals,” she says, in footage from rallys held at the time of Alex’s death.

Since then, Rose has been arrested for possession, processing and supplying cannabis. She was discharged without conviction after a judge pronounced her actions ‘altruistic.’

Judge David Ruth said Renton’s offending was “altruistic” in nature and was motivated by wanting to help others which brought her into conflict with the Misuse of Drugs Act.

I was therefore surprised to see Rose being interviewed by Patrick in her kitchen as she makes medicinal cannabis products. She shows him her fridge, lined with bottles of the same medicine she supplies Scarlet – $100 for a bottle that lasts Scarlet several weeks. Far more accessible than Tilray.

“You’ve already been caught once,” says Paddy, “and yet here you are… back in your kitchen.”

“Yup,” says Rose, with a half-smile that somehow conveys pain, calm conviction, and courage all at once. Rose has been described as having a light around her. In that moment, I thought I saw it.

Rose shows Paddy the literature on the medical benefits of cannabis. She talks about the people she supplies to – nearly a thousand people with chronic illnesses. Barely holding in tears, she says of her son -“If I’d know then, what I know now… I could have helped him. He was my best friend Paddy, and I lost him.”

After crying during Patrick’s emotional conversation with his father about his mother’s last months, during Scarlet’s description of how CBD oil gave her her life back, even during the footage of police spraying crops of medicine with Roundup, I thought I had nothing left in me. I was wrong.

In my eyes, the people who are risking arrest by cultivating cannabis to help people who are suffering, the people who say “fuck the law” like one grower told Paddy – to me, those people are… I hate the word heroes but I’m gonna use it anyway. “I believe this is why I’m here. I was put on this earth to help people. And that’s what I’m doing,” said that grower. His medicinal products get sent all around the country. He keeps a ledger of the illnesses and conditions people are using medicinal cannabis for – the many repeat customer speak for themselves.

I have incurable autoimmune arthritis. I live in pain. That is my reality, there is never “No pain.” There is always: “What number will it be on the pain scale today? Bearable to manageable, or overwhelming-opioid-reaching, searing, begging-bedridden?” When I look at my handfuls of pills every night, I can’t help but wonder what’s next. I, like so many people with chronic conditions, don’t want to take bottle after bottle of medication. I don’t stigmatise taking medication, and I don’t buy into the ‘opioid crisis’ fear-mongering, but I am constantly aware of the longterm damage some of these medicines might do – and where I might end up. If I increase my tolerance to the meds, and the dose also needs to increase… there must be a point at which that stops. And I intend to live at least another fifty years, so I have to have a longterm game plan. That plan doesn’t involve me graduating to morphine before I’m 35.

In the documentary, Paddy interviews three of the eight New Zealand companies that now have licences to cultivate cannabis for research purposes. The Misuse of Drugs regulations will be introduced in December this year, followed by the establishment of the Medicinal Cannabis Authority to administer the Medicinal Cannabis Scheme. They will oversee the industry.

And, as Paddy says, it’s an industry-in-waiting. He shows footage of New Zealand-made CBD oil, spinning in a lab, stopped by law from reaching the patients outside who need it. He shows empty buildings, ready to be filled with cannabis plants. The December regulations will allow these companies to take the next step – growing their crops, and selling CBD products.

Medical Kiwi, who will be building a medicinal cannabis facility right here in Nelson, last week announced a deal with a UK company which will allow them to import and sell CBD products early next year. Those products will include balms for arthritis, sprays for anxiety, pain and insomnia, oils and e-liquids.

As Paddy usefully and explicitly says, the cannabis plant has hundreds of compounds, but the two most commonly known are CBD and THC. CBD is not psychoactive – it cannot make you high. THC is the compound that induces the warm fuzzies. So these CBD products, all marketed as 0% THC? Are safe. Regulated. Scientifically grown and cultivated to be fit for purpose. You cannot inhale a CBD spray and get stoned. This is medicine.

It’s a medicine that is vitally needed in New Zealand. It is estimated that one in five New Zealanders suffer some form of chronic pain in their lives, with that number still rising.

In May 2019, chronic pain [was] included in the International Classification of Diseases for the first time, recognising that it affects 20 per cent of people worldwide and is a major source of suffering and economic burden.

It is… deeply painful to do the research, to look at what is happening with progressive cannabis law elsewhere, to know what could be available to me if I risk the unregulated NZ market to access products with no labels, if I risk arrest for trying to get my grabby arthritic fingers on something that will actually ease my pain. To see how close the industry is here: “on the cusp” as the doco says many times. To know safe, affordable, regulated products with ingredient and percentage labels are so, so close to happening – and politics is standing between me and a medicine that has far less side effects than the codeine bottles I have stacked in my bedside drawer.

Part Two of On Weed will have finished by now, and I’m sure there is going to be huge public response. I am for legalisation, but it was the medicinal part of the documentary that interested me most. I will watch the next part tomorrow.

Thank you again, Patrick and the team, for doing what you have done for this conversation. Thank you to the people who are risking it all to provide medicine right now. I cannot wait for the day when your vital job is legal.

And that day is coming very soon.

2 Replies to ““Not having access [to medicinal cannabis] is ‘barbaric.'””