The tyranny of misleading Netflix thumbnails, some casual misogyny, and what happens when women actually get to be in charge. (Spoiler alert:  it’s awesome).

I’ve never been a big movie person, it always just seems like too much a commitment to me. Like a 22 or 41 minute TV episode? Sure. A book with short chapters, or better yet, short story collections, or better yet, poems? Yes, absolutely. Hours of film? Catch me leaving or falling asleep.

<This post contains spoilers for Cafe Society and Wine Country>

The first films I can ever remember truly liking and wanting to see in the cinema multiple times were the Lord of The Rings trilogy, and I was thirteen when that began. The only thing I liked before that was Titanic, and I didn’t really like Titanic, I just like Leo’s pretty face and Kate’s pretty dresses.

I’m easily manipulated. I have to be extremely careful with my media consumption – books, shows, films, songs, the internet in general – because I know that I get emotionally involved at the drop of a hat. Try watching Titanic and four years of Lord Of The Rings as an early teen and you’ll learn about synonyms for torture. A particular score, a particular relationship, the wrong chord or the wrong ending, and I might get swallowed and go missing for days. It is because of this that for the most part I stick to what I know. I could watch Easy A on repeat for days, because it’s the equivalent of mental bubble gum.

What I’m saying is, I’m in no place to be a critic, but I’m going to do it anyway. Get ready for some good ol’ Year 13 English film v film. I always used to ace those essays. (Did anyone else watch really depressing movies in Year 13 English? We had The Piano and Othello, both with obvious huge artistic merit, but man will I never get over the image of Sam Neil with that ax).

I watched two films in the last couple of weeks. (Well, three, but the Lego movie doesn’t count). Both of them were in my Netflix suggestions. One of them should not have been.

Let’s start with Woody Allen, shall we? (I know, I know, bear with).

I hate Woody Allen, for many obvious reasons. Yes, I liked a couple of things of his in the past, namely Match Point and Vicky Christina Barcelona, which both objectify women horribly but c’mon I was a closeted bisexual who was presented with Scarlett Johansson making out with Penelope Cruz).

I was sucked in now by three things. 1) Against popular opinion, I like Kristen Stewart. I unapologetically enjoyed Twilight, I loved Adventureland, I loved American Ultra. So when I saw this was her with Jesse Eisenberg, I was interested. They play well together. (Also she got like n thousand times cooler when she used Saturday Night Live to tell Trump that she was gay).

2) The stupid Netflix personalised thumbnail, which lead me to believe this was a cute golden days romance, a la The Notebook, except unfortunately in this case it would be like if The Notebook was produced by Woody Allen and no one wants that. 3. The stupid Netflix blurb, which again, lead me to believe this was going to kinda sweet, maybe. However, my WOODY ALLEN internal warning system must have been offline, because, of course: What The Fuck.

The thing about Cafe Society is it’s so utterly bland. It has a strong cast – Kristen, Jesse, Steve Carrell (who I probably 20% like and respect and 80% hate), and Blake Lively. It has gorgeous sets and music. It’s like… Baz Lurhmann without Baz Luhrmann. It’s like if Baz Lurhmann got dumped by a string of beautiful women who were too young for him and decided to ditch the musical theatrics and still have gorgeous sets and costumes, but everyone is depressed and hates each other. In a way, the movie itself is an allegory for its characters. A lot of talking, a lot of build up, and then, no bang. Everyone falls flat. The conclusion is limps in so weakly you’re not even sure that’s it. All I could picture was Woody Allen in a room by himself, laughing maniacally before choking and yelling at someone to bring him a drink. I haven’t watched every movie he’s ever made, thank christ, but this is it, isn’t it. This is what he does. He sets you up and then he watches you realise that all he’s doing is holding up a mirror to all of humanity’s flaws and then he goes “Look, look, don’t you see? Don’t you get it? We all suck.”

No character in Cafe Society is redeemable. If they didn’t start out an asshole, they sure end up as one. 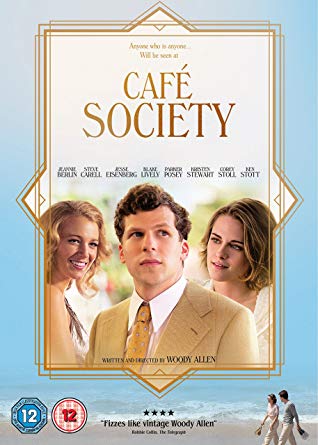 The male and female characters are both treated with disdain, but of course, the men and their development, their crises, are centred, and the women are really only there as a plot device to evolve or reveal their character. Kristen plays someone who’s meant to be “alternative” to the flashy Hollywood lifestyle of her boss, Steve Carell. She doesn’t care about the money, blah blah. Jesse plays Carell’s naiive nephew, who arrives and promptly falls in love with Kirsten, and she him. But (spoiler alert), it emerges she’s also sleeping with his married, 50+-year-old uncle. She is forced to choose, she chooses the uncle (inexplicable, he’s revolting and she is portrayed as not caring about money), Jesse goes off and becomes cold and jaded and marries someone with the same name as her (Blake Lively), who is as sappy and naiive about him and he was about Kristen.

Eventually, the two pairs meet up, Kristen has become everything she had professed to despise, Carell is a hideous as ever, and it all ends on Kristen saying something along the lines of “that’s life. You don’t always get what you want.”

Yes well. Thanks for that WOODY. That’s 1.5 hours of my life I’ll never get back.

What I hate about a lot of these sorts of films – all the sorts of films that people say they’ve seen when talking to other people at parties in order to seem intelligent, like Requiem for a Dream and Fight Club and American Beauty (none of which I have seen, nor will I ever) – what I hate about them is that they’re not as “deep” as they’re trying to be. They rely on trauma and shock and sometimes just simple upper middle class malaise in order to appear sophisticated and nuanced and I say fuck that. I deal with enough trauma and shock and upper middle class fucking malaise (not mine, I’m not even a class) in my daily life. I don’t need that from my media.

What I do need from my media is Wine Country.

There’s a reason why Wine Country feels like it’s ‘just about a group of girlfriends,’ because it is. It’s Amy Poehler’s directorial debut and the cast features all her faves from the past decade and a half, including her bestie Tina Fey. 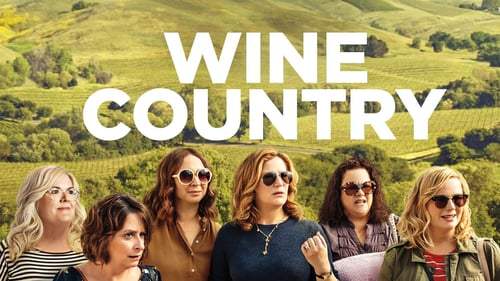 I’ve seen criticisms of WC that basically all seem to revolve around it feeling ‘a bit flat,’ to which I would respond that sure, there could have been a couple of stronger character arcs and a few more political zingers, but that’s not really what this is about. And it doesn’t pretend to be more than what it is, because that’s the point. It’s not larger-than-life villains, it’s not high budget hijinks, it’s focused solely on female friendships, and female life after turning 50. And the cast is playing their own actual ages! All of that is revolutionary on its own.

To me, Wine Country is far more the mirror to reality than Cafe Society could ever hope to be. While CS tries to tell us that life is disappointing, men are powerful assholes and women are insipid and selfish, Wine Country shows that life can be tough but far more rewarding, that romantic love isn’t the sole difficulty or sole triumph, and that women are nuanced and strong and vulnerable and loyal. It’s truly remarkable how different women-directed media is. How the writing honours the way female friendships play out, with glamouring or villainising them (though yes, a weekend in Napa in a huge house with all your best girlfriends is pretty damn glamorous). And how women might respond to the various challenges in their lives, especially at 50, the age after which all proper and subservient women actresses either get put out to pasture or get a tonne of surgery in order to continue playing women ten years younger. An age that isn’t considered young enough to be sexy or old enough to offer wisdom, and so remains a mystery largely unexplored by cinema.

You know what I probably love the most about Wine Country? The men in it are just byproducts. Barely even plot devices. Only one of them even gets onscreen speaking time, and they all exist solely to provide a backdrop to the women. Nowhere is this role reversal more evident than in Devon, the man who “comes with the house” – provided by the owner of the ladies’ holiday home to cook, drive them round and otherwise assure their needs are fulfilled. I’m sure I don’t need to be more explicit.

The fantastic cameo by Brene Brown, who’s treated by the cast as the superstar she is, is an obvious and delightful plant for the values playing out onscreen. A pretty great tie-in with the launch of her own Netflix special (watch that too).

The only criticism I have is that the cast isn’t very racially diverse, which is something Poehler is at least self-aware about, with a couple of cracks thrown in about the privilege of white feminism.

I’m pretty good at talking about stuff I hate and far less eloquent talking about what I love, so this was an interesting comparison to write. I got down most of the stuff about Cafe Society in bed last night, bashing away on my laptop surrounded by discarded chocolate wrappers, and then tried to pick it up this morning and found, conveniently, about ten billion other things to do. I have a very pessimistic personality, I’ve had a lot of time to learn how to describe all the things I loathe. But being effusive and enthusiastic? I feel ham-handed and repetitive and I always undersell my opinion, like somehow I think that my dislike for things doesn’t need much defending, but my love of others does.

In any case, I know most of my readers are going to agree that Woody Allen is the worst, so I feel I’m in safe waters.

So, there we go. A film criticism that is really just a useful vehicle for all our WLW ways.