Last weekend, I volunteered as a collector for the Blind Foundation’s annual Red Puppy Appeal. The appeal helps raise money to raise and train guide dogs, which costs approximately $30,000 for each pup.

Collecting is always an interesting experience. I enjoy being witness to people’s generosity. Despite the terrible events in Christchurch, or maybe because of that, I felt like I needed to do something in my community, and I guess others felt the same. 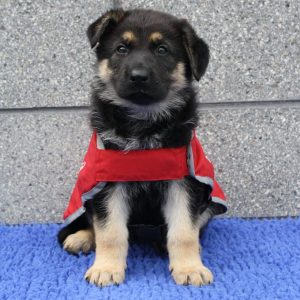 The Red Puppy Appeal is kind of lucky because it’s a campaign many people can get behind. Even if they know very little about the Blind Foundation or guide dogs, they see a cute puppy and have an automatic response.

…Well, not everyone. People often feel the need to explain to you why they’re not giving. I got a lot of “I don’t have cash” or “I already gave,” which of course is totally fine. What did crack me up because it was so bizarre, was the elderly woman who shook her head at me, sniffed, and said; “I don’t like dogs.”

At the time I just smiled and said “Ok,” because it wouldn’t have been a great look for the Foundation if I responded with “…Do you like blind people?”

It kind of blew my mind. Sure, the money is going towards raising and training the dogs, but that’s so they can be vital assistants and companions for people with limited or no vision. They’re adorable, but they’re also a disability aid. It’s sort of like saying “No, I don’t like wheelchairs.” In other words, ableist as hell.

In any case, most people were very generous and I hope the total for the Appeal is huge because I’ve witnessed the difference a guide dog can make in someone’s life. As the volunteer coordinator told me, they are the only dogs who are taught to disobey an order. Like, for example, if their handler is going to cross the street, and the person thinks it’s safe, so they command the dog to walk, the dog has to be able to assess if the road is clear, and if it isn’t, they have to know to resist the command.

A couple of years ago I interviewed my friend Pinky about her life as someone with low vision. Pinky’s first guide dog Penny had to be retired, and she’s since gotten Lyric. Pinky, who has retinitis pigmentosa,says that people’s lack of understanding about the spectrum of blindness can create extra challenges.

“I wanted to spread the message that ‘blind doesn’t necessarily mean ‘no vision at all,’ because that lack of understanding can actually make it harder for blind people. It’s difficult when you sit in the grey area.”

She worries about people thinking she’s a fraud, because she can see some things some times, and not others, an inconsistency which is normal for blind people, but one that’s easily misunderstood. “Other people are not supposed to touch them or even talk to them while they’re working, because it can be really dangerous if they get distracted. But it happens all the time, and it’s really frustrating. It’s not like it’s not obvious; she’s wearing a Guide Dog coat, I’m holding her harness.”

I’ve been friends with Pinky for a long time, and I still get angry at stories of people patting Lyric even when explicitly asked not to, and acting affronted that Pinky has “caught them” because she can see. Ultimately, it’s ableism again, and it really doesn’t take much to educate yourself a little to ensure people with disabilities can live uninterrupted.

I have to finish with one more bizarre comment from my collecting – a man who walked past me, looked only at me, and said “I bet the puppies love you!”

I really hope he was in his car on the way home, thought again about what he said and went “oh fuck” to himself, because that’s the weirdest compliment I’ve received in a long time. Another great illo from Pinky