Abby Norman was never going to have a ‘normal’ life, no matter how much she may have wanted one. And she really, really did.

Abby was born to a mostly-absent father and a mother with severe bulimia and anorexia. Abby was not supposed to be possible – her mother’s body wasted by illness, her ovaries long dormant. However, Abby happened. 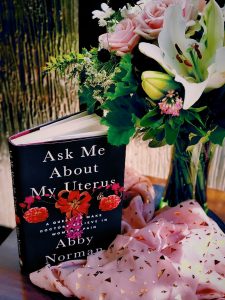 It is one thing to be born unplanned. It is another to be starved by your mother as a result of her disorders creeping beyond her own body and becoming enforced on others. Abby was a shy, intelligent child whose studiousness gave teachers no excuse to ask any questions about ‘things at home,’ no matter how much her frequent fainting spells gave them cause for concern.

At 15, Abby began to research the process for emancipating herself from her parents. On her 16th birthday, having found a lawyer willing to take her case months before, she arrived for her day in court.

Her parents did not.

This was good news, her lawyer said. They’re not contesting. You just have to take the stand, then it’s done.

Abby was somewhat numb. After preparing her arguments so carefully, she’d been ready to face her parents and bullet point their abuse, like a scripted, footnoted assassination. But true to form, they never showed. The emotional neglect she suffered her entire childhood demonstrated and culminated in that final act.

It wasn’t until years later, after a psychology lecture about the infamous “maternal deprivation” experiments of Harry Harlow- ran on rhesus monkeys to demonstrate how an infant malforms when not given proper maternal attention – that Abby allowed herself to feel her own gutwrenching loss.

When I began Ask Me About My Uterus – Abby’s autobiography, and a treasured Christmas present – I knew that she had endometriosis, but little else about her. I assumed I would find a lot to relate to, considering the tagline for the book is ‘A quest to make doctors believe in women’s pain.’

Abby’s feelings about her mother veer from something close to hatred, to compassion, to apathy – all understandable, and I ran that gamut of emotion along with her.

While I was horrified at her mother’s treatment, I saw myself on both sides of this equation. I began a memoir about endometriosis. I didn’t realise it would contain such a frank discussion of eating disorders and how they ravage your body, your mind, and your relationships with everyone around you. This is a story about far more than doctors not believing women’s pain, although that is a crucial narrative. It’s about how our pain – eating disorders effect men too, but it’s mostly women – our mental pain, how that configures itself in our bodies, how cycles of abuse are perpetuated. It asks without asking about responsibility. How responsible is someone, when they’re that mentally ill? How responsible are doctors, to intervene, to go the extra mile, to trust what women tell them? How responsible are we ourselves – Abby asks the heartbreaking question I have asked myself many times: Did I do this to myself? Did I make myself sick? 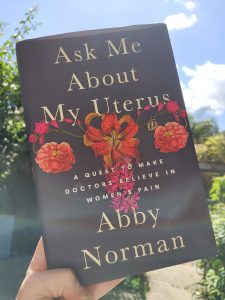 After her emancipation, Abby lived with various friends and in her car, until graduating with a scholarship to attend Sarah Lawrence. She moved to the university and began living her dreams – dancing several hours a day, writing, making new friends. Through her eyes, this year looks idyllic. Again I painfully see myself – the months before I got sick were some of the happiest of my life. Maybe they just feel this was in retrospect. Any time without illness is, by default, going to appear happier.

When Abby was struck by burning pain in her abdomen several months later, she was alarmed, but she’d also been having heavy, painful periods her whole adult life. She prayed it would pass. It did not.

The exact chronology of the story escapes me, but it took a significant amount of time, long drawn-out periods of pain, and striking weight loss for doctors to agree to operate. When they did, they found not only the multiple lesions of endometriosis, but a large cyst that was pulling downwards, creating a torque in Abby’s fallopian tube. Despite her insistent that her fertility was of no concern to her, they refused to remove the cyst or the effected ovary, instead draining it and sewing her back up. At that point, she didn’t known what an endometriosis diagnosis meant, and it was noted almost like a sidebar. No one seemed to suggest it should be of any real concern.

Abby was never able to return to Sarah Lawrence. Instead, she had to cope with a new reality of chronic pain, fatigue, and inability to eat. Her gastric complications triggered the eating disorders she’d always been terrified of. This is a story I am intimately familiar with. This is one I have written myself.

Eventually, Abby is able to take a job in the health records department of the local hospital. This gives her access not only to thousands of records, but also the hospital’s extensive medical library. Abby’s tireless research saves her life, more than once.

Abby’s many interactions with doctors who tell her it’s all in her head don’t chill me like they should. The fact that she’s responsible for saving her own life doesn’t chill me like it should. The fact that her health is all-too-often dependent on ‘professionals’ and systems that fail does not chill me because it’s mind-numbingly familiar. Myself and every other person I know with chronic illness have faced these scenarios.

After finishing Abby’s story – which ends on an inconclusive and concerning note, unsurprisingly given the nature of her health and the fact she is only 27, so of course the tale is ongoing – I jumped into another memoir of illness: Porochista Khakpour’s Sick.

I’m still working my way through this – an autobiography of Lyme disease, refugee displacement, debt, pain and addiction. It is less about science, more about relationships. More prose-like, more raw in some ways. More painful, for me, and so very necessary as a text out in the world.

I have tiny dreams about writing my own memoir, one day. One day when I can write more than a couple hundred words in one sitting. One day when I believe that anyone will want to read it.

In the meantime, it is something of a comfort to know that other women are carrying that mantle. And that I can reach for them, when the darkness of chronic illness becomes too much.