I’ve always had a fantastic memory. Now, I can’t remember what I had for breakfast most days. And it’s really, really scary.

Memory loss is associated with my illness, with some of my medications – and with the withdrawal from some of those medications. It’s different from “brain fog,” which I also experience.

It’s funny, memory is one of those things you don’t really think about, until you don’t have it anymore. Then you realise how much of day-to-day living relies on you being able to readily access information about the past.

I put this on Facebook, to try and explain to people what I’m experiencing. 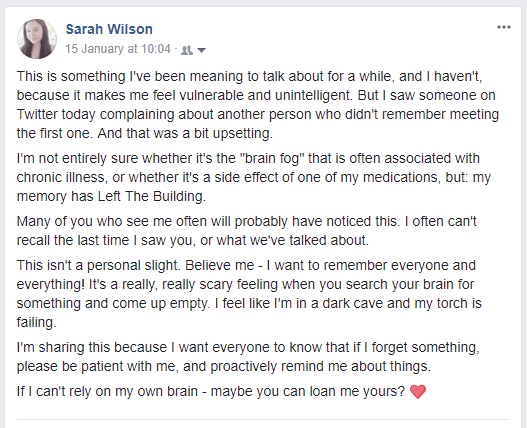 Since I wrote that post, I have done more research and spoken to my doctor – and what I am experiencing is definitely more than “brain fog,” or “normal forgetfulness” (which some Facebook commenters tried to assure me this is. No, I am sorry, but it is not “normal” for a 31 year old woman to not be able to recollect what she did even a few hours before. I don’t accept that).

“Brain fog,” which is a common part of autoimmune illness, feels like it sounds. It’s cloudy and frustrating. It’s like when you can’t remember a particular word or you’ve momentarily misplaced someone’s name. It sucks, but you can live with it. I’ve certainly learned to.

Memory loss is Next Level, and I think it started for me about six months ago (but I can’t remember *cry-laughing emoji*). I first started really noticing it when I couldn’t remember if I had emailed people back. Because professional digital communication is a big part of my job, this was very concerning. Obviously, I can use tech solutions to help me a lot with the memory loss problem overall, and this one in particular. But that was the first indicator that something was wrong.

I then started noticing that my flatmate would come home and ask me how my day was, and I’d go “ummmm.” Like: I open my mouth to reply – and there’s literally nothing there. I can’t tell her how my day was because I have zero recollection of what I did.

She says she started realising the extent of the problem when I would have to ask her “I know I went for coffee with someone yesterday – who was it?” or “I have <piece of news>! Have I already told you?” and she’d be like “Yes… you told me an hour ago.”

It’s become a bit of a joke between us now, which is good. I need to be able to laugh about it, because otherwise I’ll just be terrified.

My research does suggest that this could be a temporary thing, associated with autoimmune illness, medications, and withdrawal, rather than a: “this is how your life is now.” It’s always extremely hard to deduce these things with me, because A) I’m on a few different medications, B) Side effect lists are always long and most of the time you figure you won’t get them, and C) I’m often changing/coming off different medications.

To end, here is a slightly silly poem about brain fog that I wrote for a Patreon supporter (I write poems for some of my patrons – you can sign up here if you’re interested). Note: that movie is called Joe Versus the Volcano and you should watch it because it’s utterly ridiculous.