I think most people know that when you have cancer, your treatment options are mostly horrible, and the side effects are almost as bad as the illness itself. I don’t think as many people know it can be the same with chronic illness.

I am currently having chemotherapy. No, I don’t have cancer, but my immune system is overreative and attacking me in a similar way, so some of the same drugs are used.

I have two forms of chemotherapy; an infusion via IV every two months called Infliximab or Remicade, and a pill I take at home every week called Methotrexate. 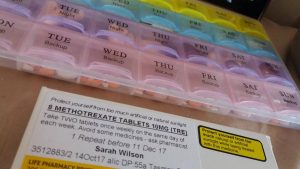 nausea, hair loss, general unwellness, depression. I’ve been on these drugs for six months and I have all of these symptoms.

It’s excruciatingly difficult to try and balance the side effects of poisoning my body and suppressing my immune system with what benefit I might be getting from the treatment.

When people ask me “Is it working? How do you feel?” I can only answer “I don’t know,” and “I feel awful.” Because that’s the truth. I haven’t noticed any significant improvement in my wellbeing since I began chemotherapy. I’m still in constant pain. I’m still stiff and aching. I still have so little energy that even getting angry about my situation isn’t worth it because that will send me to bed.

An additional complication is that, just because I can’t feel an improvement, doesn’t mean the drugs aren’t reducing my inflammation and slowing the progression of my disease. I just can’t know for sure.

So when the rheumatologist asked if I wanted to continue with chemotherapy, I felt like crying (when do I not?). How was I possibly going to make this decision? I hate the side effects, and overall I want to be taking as little medication as possible. If it were an option for me, I’d throw all of it in the bin tomorrow. But that’s not sensible right now, or doable. So how do I prioritise and make decisions about what to take?

I’m ashamed to admit I’ve got into a bad habit of emailing all of my doctors lists of questions. I know that it’s not fair to them, but honestly? there is no way I can get answers to everything I need to know within a fifteen minute appointment, and I can’t afford to see my GP ($39) twice a week, let alone my specialists, whose prices range into the hundreds if I see them privately (which I have to if I need answers now).

I can’t make these decisions on my own, and Googling medications is a bad idea. You  get such a small part of the picture, you scare the crap out of yourself with lists of side effects, and other people’s experiences are of no use – they’re other people, not you. Everyone is different and will react differently. 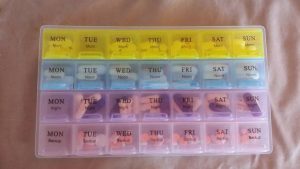 I found myself fervently wishing this past week that there was some way to get all of my doctors – my GP, my rheumatologist, and my psychiatrist, primarily – into one room for at least an hour – better still (just if we’re dreaming) a whole day. I actually weep at the thought. Because while my specialists write letters to my GP to inform him of our appointments and if anything has changed with my prescriptions, that’s really only half the story.

Every drug I am on interacts with every other drug I am on. All of them have side effects. All of them have nuances like what time of day they have to be taken and how much and what the withdrawal profile might be. So if I want to make any changes to anything, I have to see at least one doctor. Another expensive visit that may not even result in any answers.

I am at my wit’s end. How am I supposed to decide if I should continue with chemotherapy? I don’t feel like I’m adult enough or educated enough to make that call – even though, obviously, it should be up to me. I’m embarrassed to say when I look in the mirror and I see how awful I look, with my hair falling out and my face swollen from steroids, that I definitely want to stop. It’d be different if I felt better for the drug. If I felt like, after my infusion, my back didn’t scream with pain and I could get off the couch without pushing myself up like I’m 90 years old. But I’m utterly uncertain I’m seeing any benefit.

My doctors keep frowning and saying that I’m “a complex case,” and when I ask about certain syptoms or side effects, they shrug and say it’s “hard to tell what’s causing that” because I have multiple diagnoses, and because of the list of medications I’m on. This makes me feel so hopeless and frustrated. They put me on all these drugs in the first place, and half the time there was no warning about what they might do to me. Now, I can’t get off them easily at all, because I’m dependent, so even if I could live without them, I have to do a long and sensible withdrawal process. And withdrawals are messy and painful, and you can only do one drug at a time, so you can at least know what’s causing what symptom. Therefore, getting off the list of drugs I’m on is going to take years.

I’m not writing this to complain, although to be honest I think that’s justifiable. My current situation is causing me a lot of frustration and misery. I think it’s important to recognise all the facets of living with chronic illness, and medication has a huge role to play.

Back before I got sick, I just figured when something was wrong with you, you went to the doctor, they gave you a script, you took whatever it was for however long, and bam, cured. It’s so much more complicated than that. And I don’t want to scare anyone – but honestly, doctors are guessing way more than you think they are. It’s really important you ask lots of questions (as many as you have time for) and make sure you know as much as possible about both your diagnoses and your treatment options. This applies to mental health as well as physical health, and I’ve written about that before – if anything, that’s even more sensitive because there’s a lot more at stake than hair loss.

Unfortunately, because of my chronic illnesses, I’ve ended up feeling like a lab rat, and it is hateful. I honestly couldn’t tell you if any one thing that is happening in my body right now is a “normal,” or part of my illness, or because of one of my medications, or because of withdrawal processes. It’s bizarre to not to be able to trust a single thing my own body (or brain) does.

This is just another reason I tell people that being sick is like a fulltime job. It’s a major balancing act – and that’s not even considering diet, exercise, and all the other things I’m supposed to be doing to help myself. I try. I really do try.

But I don’t think it’s any wonder why I’m so damn tired.