I’ve written a bit about sex and disability before, but that was a long time ago and recently I’ve spoken with  few people about their experiences, so I want to talk about it more. 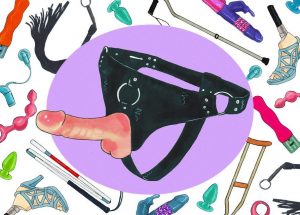 Disclaimer: people with disabilities from all walks of life can want, and have, sex! You’re all shocked, I know. Salacious af.

We also can struggle with it, just like anyone else. There are unique challenges, no matter what your disability or illness might be.

When I wrote about this before, it was a couple years ago and I was looking at how my relationship with my body had been affected by getting sick. That’s still something I’m working on – I always will be, because my body continues to change and I continue to be challenged by it. It can be very hard to feel sexy when your illness, and your medications, are creating a bunch of conditions that may not be ideal and that you can’t control.

I’m forging a new relationship with my body. I’ve realised that, as a woman in this society, I expect a lot from it. I expect it to function and perform on command. I expect it to keep going at all costs, even if I don’t provide it with the right fuel. I expect it to fit external measures of beauty, at all times.

I’ve kind of made some people’s sex lives my business since I wrote that, or, more accurately, they’ve chosen to share with me.

One of those people is Kate Montgomery, who I wrote about for Folks. We spoke about her fight for her positive body image. 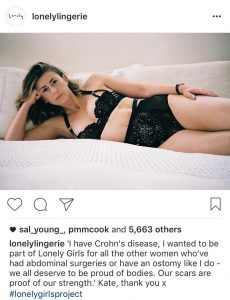 Kate is currently part of a campaign for Lonely lingerie, something she found liberating and empowering after surgery that irrevocably changed her body.

“Getting an ostomy was like having my self-esteem squashed into thousands of tiny pieces, then put in an industrial strength blender, then run over with one of those machines they use to lay asphalt. I’ve worked really hard to put it, and myself, back together.”

“I thought no one would ever be attracted to me again,” Kate told me in her Folks interview. “I was ashamed of it, it just mortified me. I would cry just thinking about it.”

But, largely due to her hard work both rebuilding her strength in the gym, and working on body positivity for herself and others, Kate doesn’t feel like that anymore. She appreciates her body for the strength it has.

Craig*, who spoke to me on Twitter, said his loss of interest in sex due to primary headache syndrome had been the cause of the end of at least one relationship.

“It became a breaking point in a relationship last year. I did a pile of tests to see if my libido was something else — nope. testosterone fine, everything checked out. so, it’s (literally) all in my head.

Usually I shy away from diagnosis/labels, and just describe it as a constant dull headache (I reached 14 years last month, weee! best anniversary.) Add to the mix some chemotherapy in the midst of all of that, which arguably altered brain function. one way or another, I’m most of the way toward asexual when it comes to relationships on a practical level. it’s just easier to just…not.

“I have a headache” is such a bullshit cliche so it feels like I’m not allowed to use it, so I find I reach for other excuses (current work stress, being tired, etc etc.

Sally* has several illnesses that impact her sexuality. She wrote this about her experience.

“Endometriosis for me has been a rough ride, but not as rough as for many women I know. Since I had a Mirena put in two and a half years ago, it has been mostly fine, with only a few bouts of pain, mostly when I’m so stressed I can’t even think about sex! When I was younger it was much worse, and sex could cause quite a lot of pain, but my Mirena has been a godsend.
My IBS has had more of an impact, as the ripples of pain make sex almost impossible when they rip through my body. It’s also deeply unsexy to be rolling in pain while a guy goes ‘HUH?’ and stares at you, never mind the odd rushed bathroom break. For a long time, when it was bad, I avoided sex with people I didn’t know well enough to tell them what was wrong. Now, I just tell people as it pops up, and if they don’t understand they can politely fuck off.
My bipolar disorder has had the most impact on my sex life. First, there’s the depressive cycles, when sex is just wayyyyyy too hard. This was rough on my husband when I was married, but now I’m single it doesn’t matter so much. Then there were the antidepressants. I was on escitalopram and then sertraline for a few months, and not only did they not help, but the libido suppression lasted a good two years after I came off them. I was not impressed. I would force myself to have sex with my husband for his sake, and I did not feel bitter towards him at all – it was more toward the drugs that had done this to me. And then. And then there was the mania and hypersexuality. That, I could write a book on. Hypersexuality destroyed my marriage. I asked if we could open it up because his libido could not match mine, but for various reasons this did not work. I turned to friends and lovers for additional support and he felt pushed out. Since we separated, I  have spent maybe a month worth of nights alone, with the rest being with strangers, gradually turning to people I know, and finally people I care for.”
—
I related to a lot of what these people shared with me, and I am very… honoured is the wrong word… I’m just really grateful that people trust me enough to tell me these private stories. Because I think it’s so important that more gets said about tough topics like this, and if I can support that in any way, I will.
While I was working on this post, this article popped up on Facebook – Having a Disability Doesn’t Mean You Don’t Have Sex.
“Unfortunately there are many myths and taboos around sex and disability,” it says. “People with physical or intellectual disabilities in today’s society are often regarded as non-sexual adults. Sex is very much associated with youth and physical attractiveness. It’s therefore easy for people who have disabilities to be influenced by these myths and believe they don’t have a right to have sex. But that just isn’t true.”
The article goes on to talk about the rights of people with disabilities, the issue of consent, and some of the barriers that can stop people from having positive self image and positive sex lives. For me, this was a key point:

I think this reframing is vital, and for me personally it was kind of “ah” moment. We’re sold so many inflated and misguided ideas about penetrative intercourse being the only true way to have sex. Obviously, that’s bullshit, for a bunch of reasons, starting with gender and sexual orientation and including all the different ways our bodies are and can be.
I need to reframe, again, how I look at my body and what I expect from it. For me, body positivity is the key to sexuality, and it’s especially crucial when the body in question is ill or disabled. Others might feel differently, but I know that I need to work on feeling better about myself. Hard to do when, as I said earlier and as others have also said in this post, your illness and your medications are creating conditions you can’t control. But I can control what I think. So. I guess we just start from there.