I’ve been working on an essay about a couple of things that help me and the people around me understand chronic illness more – Spoon Theory, and Sick Woman Theory. They made me think about the politics of self care, and why I find it so damn difficult.

Self care does not come easy to me. I’m quick to blame myself – I shrug and laugh and say I’m anxious, I’m highly strung and high maintenance – when really I’m strung out and sick and I’m a product of my society.

Spoon Theory offers the idea that most healthy people have a lot of energy, though it’s still finite. Sick people do not. Spoons are a metaphor for that energy. As someone with chronic illness, I have very limited spoons, making self care even more fundamental.

Hedva theorises that one does not need to be public to be political. That the most anti-capitalist thing we can do is care for ourselves and others. To “take seriously each other’s vulnerability and fragility and precarity, and to support it, honor it, empower it. To protect each other, to enact and practice community.”

In July last year I wrote about Laurie Penny’s Lifehacks of the Poor and Aimless, which begins:

“Late capitalism is like your love life: it looks a lot less bleak through an Instagram filter. The slow collapse of the social contract is the backdrop for a modern mania for clean eating, healthy living, personal productivity, and “radical self-love”—the insistence that, in spite of all evidence to the contrary, we can achieve a meaningful existence by maintaining a positive outlook, following our bliss, and doing a few hamstring stretches as the planet burns.”

Penney says that this new ideology of wellbeing – the smoothie bowls on Facebook, the Yoga tips on Twitter – is individual – laying the blame squarely at our own feet. “The isolating ideology of wellness… persuades all us that if we are sick, sad, and exhausted, the problem isn’t one of economics. There is no structural imbalance, according to this view—there is only individual maladaption, requiring an individual response.”

I honestly don’t know what radical self-love is. I presume it has nothing to do with vibrators, which makes it seem far less fun.

Why is it so hard to take care of ourselves? We feel so guilty for doing so, we plaster our attempts across social media for validation. “Is this it? Am I doing it right?”

That guilt, and our reaction to it, has its home in social conditioning. If we’re truly caring for ourselves, we’re probably not getting up at 6am to go the gym, working 50+ hour weeks, going to pilates after work, and cooking a paleo dinner from scratch. We’re not a silent part of the capitalist machine.

Nothing depicts this quite so acutely as this Doerr ad, which glamifies what is essentially a sickness, or at the very least unhealthy behaviour. 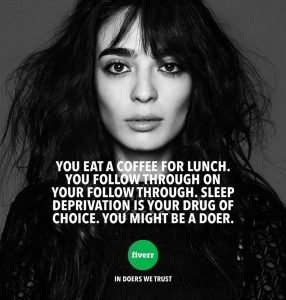 “Eating” coffee for lunch isn’t a positive. Neither is sleep deprivation. What are you, personally, gaining here? Probably very little. Maybe, eventually, enough to put a down payment on a shack in Gore. What is your boss, and your boss’ boss’ boss’, gaining from your dedication?

I was confused by this ad for Vodafone, which seems to suggest that not only should you be busy – you can be even more busy than “being busy.” 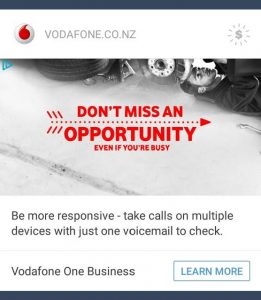 Never miss an opportunity! it yells, playing on our fear that, if we’re not responsive – available – 24/7 – we’ll miss out. On what, exactly, we’re never sure. With our multiple devices, we’re expected to be always “on.” When, then, is switching off ok? Why is it necessary for people to loudly announce leave from social media? Why have we become unable to have conversations without checking on other conversations?

Meanwhile, doctors ponder the rise of illnesses like chronic fatigue syndrome and fibromyalgia. “No known cause” all the medical journals say. Naturopaths name heavy metals, nutritionists feed hysteria around sugar.

In the midst of the conflicting pressure to achieve success through capitalism, and the new pressure to take care of yourself but only in the socially acceptable ways – eat avocadoes! No, don’t eat avocadoes, you need to save to buy a house! – I remind myself of Johanna Hedva’s words. “Take seriously each other’s vulnerability and fragility and precarity…. support it, honor it, empower it… protect each other, enact and practice community.”

Taking care of yourself is nothing short of revolutionary.

“On my greyest days, I remind myself of the words of the poet and activist Audre Lorde, who knew a thing or two about survival in an inhuman world, and wrote that self care “is not self-indulgence—it is self-preservation, and that is an act of political warfare.”

What I’ve written about this before:

False idols and self care

Self care vs Selfishness: how do we know?