I am terrible at making decisions. The other day I spent 45 minutes trying to choose between two duvet covers at The Warehouse, followed by twenty minutes staring at different types of yoghurt at New World. No exaggeration. I didn’t even buy any.

Now imagine me trying to make a decision about something that’s actually important. Yeah. It’s as painful as it sounds. I’m very lucky that the people around me have the patience of saints.

Black and white thinking is apparently typical in people with my history and mental health. I guess it’s a way of trying to prevent uncertainty, because I find it really hard to deal with not knowing how every choice I make might turn out in, like, twenty years.

But reducing everything to binaries just makes everything worse. It’s so often a false dichotomy. You’re creating pressure that isn’t there.

So, now when I’m trying to decide between A and B, I take another look. What’s Option C?

Even just by asking the question, it reframes the situation. I can feel the pressure easing off.

Nine times out of ten there will be an Option C, even if it’s ‘sleep on it and make  a decision between A and B tomorrow.’ Delaying can actually be a great Option C, because giving things time can reveal new information. I just have to make sure, if I decide to delay, I don’t delay indefinitely. That’s called avoidance. I excel at it. 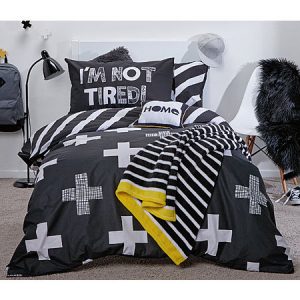 I eventually convinced myself I didn’t need this. 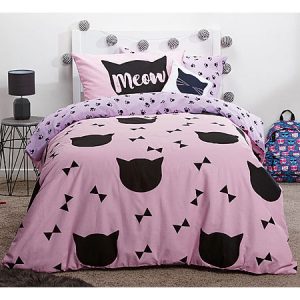 I *would* have got this but they didn’t have it in Queen size which is blatant discrimination.

The other thing I’m learning that helps me with Option C is: not everything has to be perfect 100% of the time. This is kind of an extension of the idea I introduced in this post about the difference between rules and guidelines. Am I trying to make a decision between A and B within the parameters of strict (and probably arbitrary) rules? And if so, can I change that rule into more of a guideline, and therefore relax enough to be able to include an Option C in the mix?

The other thing that Option C makes me think about is how so many binaries are lies. Almost everything is, in fact, a spectrum. Breaking things into binaries seems to be a typical human sorting mechanism, but it can do a lot more harm than good. It’s very rare that things are all one or all the other.

You only have to look at gender or sexuality for blinding examples. How often do we hear that people can only be gay or straight and anything else is a lie or a phase? If I’d known bisexuality was a legitimate thing ten years ago, I could’ve saved myself a shit load of confusion and pain.

So. Next time you discover yourself on your knees in the manchester aisle, holding a red duvet cover in one hand and one that says “I’M NOT TIRED” in the other, consider this: you could buy the one on the shelf with flowers on it.

Or you could walk away before your partner decides to leave you there.

Duvets are not the end of the world.

One Reply to “Language is power: Option C”