Last weekend, I took part in RADtalks, an event organised by Jo Randerson as part of Wellington Literary Crawl. The kaupapa of RADtalks was a space where we, the speakers, could say what wouldn’t normally be said. To be passionate and angry and fuck politeness and fuck New Zealand’s tendency to shy away from anything that suggests our country is anything less than a 100% pure progressive paradise.

I spoke about invisible pain. In this case I was focusing on the physical sense but what I said could easily be true for the pain suffered by survivors of sexual violence. It may not show on the surface but it will always fucking hurt. (I will publish the talk in full later).

I do not fully understand the Christmas Island situation and I cannot speak for the human rights violations involved in that. What I know is that our Prime Minister John Key accused the Leader of the Opposition Andrew Little of supporting the rights of rapists and murderers over those of other New Zealanders because Little questioned the Government’s inaction over those violations.

1. This is not a fucking binary. In an astounding attempt to defend his Government and deflect the actual question, Key attacked and created a situation where people thought they had to choose. Where people would think that they needed to stand for the rights of “other New Zealanders” over the rights of criminals. In no way was Little defending criminal action. He was defending the human rights of all New Zealanders and righfully interrogating the Government’s clear inability to do the same.

2. This is not, by a long shot, Key’s first demonstration of utter lack of care for sufferers and survivors of sexual crime in New Zealand. Hadassah Grace wrote a fantastic piece detailing very carefully the cutting of support services during the National government’s reign.

ActionStation used Grace’s article to create this infographic, and they’re frontfooting a campaign for an apology, along with commitment to fully funding sexual violence services.

I’m very glad to see that ActionStation is asking for more than an apology, and that their petition is nearing 8,000 signatures. As our incredible wahine toa showed in parliament following Key’s accusation, this is going to take a lot more than words to fix.

I mean, the story only gets worse.

On Wednesday, four woman Members of Parliament – our representatives in the House – stood up and asked that the Prime Minister withdraw his comments and apologise. They revealed their own experience of sexual crimes. One by one, they were silenced by the speaker of the House David Carter, who appeared far more concerned with following ‘proper proceedings’ than facing the situation occuring. 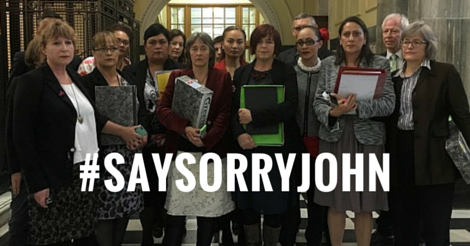 I have never been more proud of the women in our parliament (who compose less than a third of the members, because of course), and more utterly disgusted by the men. Imagine the courage, to not only stand up against the government and the Prime Minister inside the House, but to also reveal your status as a survivor. In a room full of men, a room than has been run by white men for generations, a room that is still run by white men who perpetuate violence against women by silencing their voices and their experiences.

Last night at RADtalks, the incredible Jessica Hansell – aka Coco Solid – spoke about systemic violence. She said a lot of really incredible things and I’m afraid I cannot even begin to relay them, but there’s a few things that stuck with me.

– Violence is not always physical. We must move beyond the idea that violence is only physical.

– We do not exist in a vaccuum and everything has a context. The context of Key’s accusations and the response by both the women and the Speaker in parliament is colonial and patriachal systems of punishment, imprisonment, and government.

I emailed Coco about this and she added:

The women in parliament essentially had their experiences erased. They simply asked the PM to reconsider his words and not to be brutally opportunistic about an issue they as individuals have experienced and have to live with.
So by ejecting people who for good reason don’t take the semantics of rape as lightly as him, by refusing to hear these women who are our elected leaders as well, he (and in turn the people he supposedly represents) missed a huge opportunity for political growth and empathy – what is lacking in the detention centres. Disconnected, he executed violence with his leadership and showed it doesn’t have to be physical to disempower.

As if we had not had enough at this point, former National Party President Michele Boag emerged from under her rock to accuse the woman MP’s of “making it all about them.”

“I was a bit disgusted by those women standing up and parading their victimhood as if it was something special” she said.

You know what I’m disgusted by? Boag’s utter lack of empathy for fellow women, her commitment to a party that, as Grace’s post shows, not only does not support women but actively removes services that do so, and her belief that anyone – anyone – would “parade” their history of assault to gain political points.

‘Boag said most women she knew had been the victims of sexual assault “in some way,” but did not get the opportunity to share their experiences publicly. “They weren’t saying ‘Look, if you’ve had these issues, here are all the people you can go to for help, they were standing up and saying “poor me.”‘

First of all, no they were fucking not. Second of all – most women she knows are victims? Then where the fuck is her voice for them in this? And thirdly – ‘opportunity’? Opportunity? What woman would consider the dire need to stand up in possibly the most intimidating environment in New Zealand and reveal their personal history as an opportunity?

Please, tell me, if you’re a woman out there right now just gasping to get into parliament and tell that room of men about your sexual assault – well, let’s do it. I’ll go with you. We’ll get thrown out together, shall we? What a fucking opportunity!

And you know what the kicker is? The bit about parading victimhood “as if it were something special.”

Despite the fact that one in three women in New Zealand experience pyschological or physical abuse from a partner at some point in their lifetime (source), which makes it massively prevalent, victimhood  – or being a survivor – is a unique thing to each person who goes through it and trying to take that away from someone is just fucking nasty.

Even if the apology emerges, those words from that man mean nothing to me, because he couldn’t care less about the trauma. The absolute singular reason for an apology would be PR instruction.

And that means fuck all.