I got a variety of responses to coming out. One of the most common ones was “Oh yeah, I knew that.” And I was like, really? Couldn’t you have told me?

It took a long time – and the actual act of falling in love with a woman – for me to accept and identify as bisexual. I think a lot of this was to do with confusion and youth and not really feeling legitimized in a lot of aspects of my identity. But it was also because of repression in the face of socialised beliefs, like:

– Bisexual people, especially women, are pretending in order to get attention

– Bisexuality is a phase before people actually make up their minds

None of this is true. 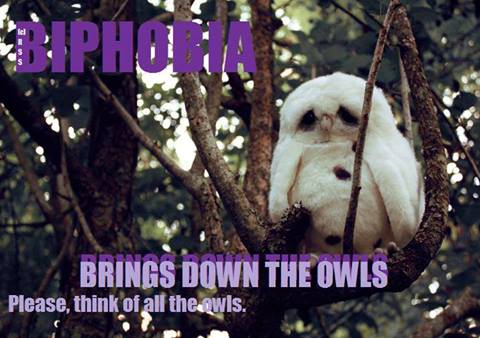 Being bisexual means different things to different people. I asked a few friends what they thought.

“My sexuality is not just who I am currently dating.” – anon

“Being bisexual for me means that people’s gender isn’t a contributing factor in my attraction to them. Their spirit, their humour, their charisma and their passions attract me more than anything. I enjoy being able to enjoy different people’s masculinity, femininity and gender fluidity as part of my relationships and explorations with them. Being bisexual is also a way for me to shake off the society-mandated competitiveness I’m supposed to feel with my fellow women, and appreciate their beauty and successes as something I’m inherently attracted to, rather than jealous of. But being bisexual is also a constant battle to not have my sexual orientation defined by the gender (or lack thereof) of my current partner/s. I’m married to a cis man who is my life partner, but I’m not straight. This is far too confusing for far too many people and that’s exhausting. Sometimes it’s easier to just let them assume, and that’s hard.”- Nicole Skews-Poole.

“So, been bi for as long as I can remember but never really comfortable with that. Spent teens and 20s trying to find out which side of the fence I was really on. Used my sexuality as the reason for ending 2 LTRs with men but really there were far more pressing reasons for them to end. Even a couple of years ago I was describing myself as a lesbian. to much joy from some gay friends who were quite scathing of bisexuals. My husband is fine with my sexual identity (as I am with his) and we’ve talked a lot about our identities now we’re in a monogamous, straight-looking r’ship. I sometimes feel that, now I’m married, my queerness has disappeared and I don’t know how to celebrate mine and my husband’s identities without it sounding fake or twee. I don’t miss being with women but it’s never just about who you’re sleeping with, is it, it’s much deeper than that. Having found being bi so awkward, it almost feels easier to just let that facet of me lie and focus on being an ally for all the people without my straight(looking), cis-gendered privilege. Waving a “I’m queer too!” feels like I’m being fraudulent.” – anon

“Bisexual has always just been a thing that I am. It’s not something that defines my identity and has never seemed out of the ordinary for me. I guess for that reason I have never even thought of myself as part of the lgbt community because I’ve never felt different.” – anon

“To me, being bi means not fixating on things like gender or sexuality. It’s about loving the whole person for who they are” – Jinee

“Despite never claiming a bi or queer identity (& feeling unsure about doing so bc I don’t want to take space from those who do identify as such), I feel lucky that the option exists to celebrate whoever I love. I have great friends who are very supportive, but I’m private about my love life & haven’t felt the need to talk about it outside that space. But knowing ppl who speak out against bi erasure makes me want to be more vocal & not just benefit silently. So, to me being bi (i.e. claiming that identity) means being aware that a part of my self is subject to discrimination, & I need to be part of changing that. It means acknowledging those who fought for their rights (& mine). While I know it is more than a label, the label part is still important because it’s a declaration. I am not sure about making that declaration. I don’t know if it will be supportive or appropriative or transformative. But I do know that if we don’t all stand up and celebrate all identities, and fight for everyone’s human and civil rights, then we will all be poorer for it.” – anon

“Coming out of a five year relationship (with a man), it was something about myself I finally felt I could explore. It surprised people, it resulted in friends assuming I was just ‘experimenting’, and in meeting others among the queer community there was quite a lot of hostility to be honest. In response, I kept it to myself and only explored it with people from outside of my immediate circles. This felt safer than telling people who had only ever known me as ‘straight’. I am now in a committed relationship with someone who understands that I have attractions in two directions and it is welcomed and respected. I don’t discuss it publicly often, as it is something for me, and me alone. Perhaps this is not the shouting from the rooftops approach that some people adopt, but it is what I have moved towards as both a protection mechanism and a way of ensuring people respect that it is but one small part of what makes me the person I am.” – anon

“Being bisexual means that when I am attracted to someone, I am more interested in how they treat me, how they live in the world, and often (tragically) how well they play the guitar, than in what gender they are. My problem isn’t that I’m confused about my attractions or won’t make up my mind or want the ‘best of both worlds’ or any of those other stupid stereotypes. My problems are things like: ‘when will I start falling in love with people who actually want to be in a relationship, and not just people who *think* they want to be in a relationship?’ And where do I meet single or available people who love dogs in a slightly insane way like I do?’ And ‘Wah! All the really hot folks are happily partnered! Or they wanna have kids!’ It’s not as if I don’t notice gender. I do. But it’s not a defining, deal-breaker kind of noticing.” – Hinemoana Baker. Listen to Hinemoana’s song about this here.

“Bi is a little door never mentioned except to mock or talk me down from ‘gay’. Opening it for the first time, though, I finally saw myself.” – Jon

I liked the way gender and sexuality advocate Robyn Ochs puts it.

That really slices through the false narrative that “bi” provides for a lot of people – that there are two genders that you are equally attracted to in all ways.

I’ve had some funny accusations since I came out. The best was being told I was dating a guy because I really wanted to run off with his wife. Honestly? True reaction shot.

For me, the worst thing is not when straight people accuse, deny, or misunderstand – it’s when people in the LGBTQ community do. It was incredibly painful and strange to see a group of lesbians having a conversation about how they would never date a bisexual woman. I’d heard that people had these sorts of feelings, but I’d never seen them expressed quite like that.

Which is, I guess, why we had a day to celebrate. It’s another layer of my particular layered identity that can be labelled as shameful or antisocial or whatever (like being disabled), and I’m damned if I’ll sit back and take that. I’m proud of every bit of who I am.

One Reply to “Celebrating our existence”