So I got excited about quite a few fantastic feminist things I’ve come across in the past few days – including in my poetry class, which was a bad ass time. I have some good shit to share! (This is kind of a long one, soz).

Last week’s homework exercise for poetry class was to choose a clip of some performance poetry online, and write a response to it. Not necessarily a direct response, just something inspired by.

I was like uuuhhhh because I have never considered myself a performance poetry fan. Probably for two reasons – one; I’m jealous of people who can do it, because it’s often an amazing, memorised performance, and two; I was all like “poetry is meant to be on the page blah blah.”

Yeah I guess you could say my eyes got opened.

I asked on Twitter for people to recommend some clips to me. I ended up choosing this, which isn’t “technically” a piece of poetry, but it sure as hell reads like one. I think I’ve watched it close to thirty times now and every time I break down a little. It’s sections of a speech delivered by the former slave Sojourner Truth at the Women’s Convention in Ohio in 1851. Here’s the full text. Sojourner Truth was the first black woman to win a case against a white man to get her child back from slavery.

I felt extremely challenged by how to respond to this, as a white woman in New Zealand. It’s kind of hard to share the poem I wrote, because it’s best heard aloud, but it goes something like this:

You probably want to know how that’s a poem. But it’s always been about politics, and form is just another fight.

I hate performance poetry. Maybe I hate it because the first woman I saw was so good, I promised myself I’d never go up against her.

I don’t help women by hating the sound of my own voice.

How do you respond when someone says ‘Hey. You fucked up.

In fact, your whole race, your whole sex fucked up and maybe you need to just sit down and have another look at your tongue.’

If you tried to answer that you’ve already failed.

I can give only two things. My voice.

The class that day was really amazing. I actually came away feeling quite raw and like it’d been some sort of group counselling session haha. Everyone really committed to the exercise. There’s two other responses I want to share (with their permission).

Tayi Tibble responded to Novacane’s Memoirs of a Player, which is super intense. Warnings on that for hardcore swearing and challenging topics. It’s pretty incredible. And so was Tayi’s poem – that last line fucking slays me. 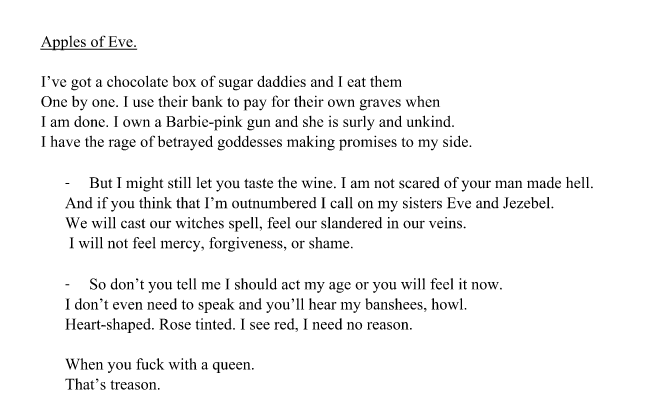 My classmate Claudia Jardine actually responded to a clip of her younger self doing a slam performance, which is here. O m g I loved everything about this. You should watch it, but if you don’t, it’s about being cat called, and it’s really powerful. Claudia’s poem in class addressed the fact that, although the poem was brilliant, she got kicked out of the slam because she ran on too long, and she never got to say the last lines, which were: “as you roll down your window and ask for my number, I’ll memorise your license plate and call your mother.”

We also had a classmate share the Period Poem by Dominique Christina. I was absolutely floored by this performance, and there’s just some incredible lines in there. It’s a letter to the poet’s daughter, in response to a “dummy on twitter” who made a terrible derogatory comment about menstruation. It’s really a call to arms and I felt empowered by it. But I did have it pointed out to me that it’s very gender essentialist and transmisogynist, so you need to view it with those problems in mind.

There’s three other non-poetry related links I wanted to share. (Phew, I hear you say. Stop it. Poetry is cool).

‘He’s ready to see you now,’ says the well-dressed receptionist. I find myself wondering what she gets paid. Some people seem to get off on the constant presence of servile flunkies, and I make a note to actually talk to some of them later in this story. Meanwhile, Christian Grey, superstar billionaire, is waiting for me in his office.

I have no idea why he has agreed to this interview with Red Rag – he must have had his people research our political leanings, and he knows we’re looking through his financial records, which are murky and confusing, just like Grey Holdings itself. Nobody’s ever been sure what the company actually does. They prefer to focus on Christian Grey’s tight abs and storm-grey eyes. But I can’t get excited over someone whose precise methods of profiting from the alienated labour of god knows how many low-waged staff still need investigating.

They’ve got a point, though – Christian Grey is incredibly hot, and also really rich and successful, like Mark Zuckerberg if Mark Zuckerberg were incredibly hot. Also a bit like Edward Cullen from Twilight, although not enough to constitute a copyright violation, because he’s wearing a business suit. Just another bloodsucker.

“Miss Gold,” he says. His voice is deep and growly like a sexy vacuum cleaner. “Please sit down. May I call you Emma?”

Lollll ‘sexy vaccuum cleaner.’ Brilliant. It gets better. Go have a squiz.

I also wanted to share this post from tumblr about women working in retail and all the bullshit they have to deal with. It felt horrifying familiar. I have a friend who works in a jewellery story. She deals with a man who comes in quite often just to compliment her on her appearance. Another friend of mine has had multiple men say they see her at her work and have identified her from Twitter, but they never identify themselves. It’s creepy as fuck and it’s not ok.

Finally, another post from tumblr. This one’s on White Feminism, and it is so great. It’s a series of gifs that link back to a Huffingpost video; Why We Need To Talk About White Feminism. It explains what White Feminism actually is and why it’s a problem. It’s real good. Go. Go do the thing.

Anyway, that’s probably enough from me. Time to be silent.

One Reply to “That’s treason”