Almost a year ago, I wrote about how the advertising channel GiggleTV is sexist and offensive. Unfortunately, it has continued to spread, and has only gotten worse.

GiggleTV is a franchise. It works by selling screens and content to small business owners. Here’s the whole explanation. The screens are installed where customers can see them. The content is a slideshow of advertising mixed with jokes. Here’s their explanation. 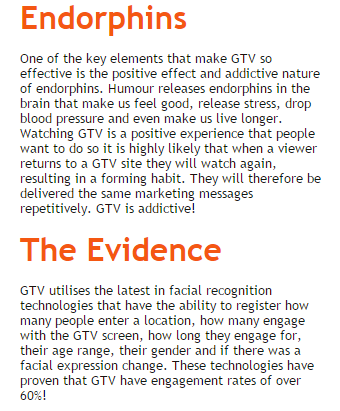 Um, what? Ok, so the first part is creepy enough. But the second bit… they’re watching us watch the screen? That seems so… invasive. And how is it even technically possible?

Anyway, I complained because GiggleTV appeared in both my Doctors and my pharmacy. These are places I often have to sit and wait, and here’s this screen, right in front of me, rotating sexist and offensive jokes. GiggleTV class themselves as G-rated. These don’t seem G-rated to me. After I complained, I got a response from GiggleTV’s director. Needless to say, they weren’t interested in my concerns. They said I clearly had no sense of humour. They refused to take any responsibility for the offence they cause.

Although you find it ‘disgusting’ it is a reality of the World we live in.

Advertising is all around us – the radio, the paper or a magazine, a sign written vehicle or the back of a bus or a billboard, tv etc. It is unavoidable and beyond the control of any one person. GTV or not there is and will continue to be advertising all around us.

I would like to request that next time you encounter a GTV you choose to take a seat where you are not positioned in front of a screen. Instead look away.

Unfortunately, I can’t ‘look away.’ GiggleTV is in my doctor’s surgery, my pharmacy, my hairdresser’s – and today, it was in the cafe I was having lunch in. I’m bisexual. I have many friends who are bipolar. This “joke” is offensive to both, and it’s also offensive to men. It suggests men are being sleazebags. It suggests being bipolar is an unattractive trait. It’s awful.

I put this image, the one above (Working Late at The Office) and this next one, on Twitter, and asked others what they thought. 1. At worst this joke [the one regarding bipolar] is deeply offensive, at best it fails to be remotely funny. It is unclear if the fact that the ‘she’ being bisexual is supposed to be good or bad, or of no consequence, but its presentation with a sad looking guy has the implication that the teller was hoping for a bisexual woman. This perpetuates the culture of reducing female sexuality to something for the titillation of men, effectively erasing their sexual identity. On top of this, myself being bipolar, this once again shows a complete misunderstanding of mental illness. GiggleTV has reduced one of the deadliest mental illnesses to a punchline, an unfunny, unclear and simply offensive attempt at humour, one I might see while sitting in my doctor’s office.

2. That sort of joke is why I was terrified to get a diagnosis when I suffered from depression. I was scared people would poke fun at me. It was awful.

3. A doctor that allows this service in their healthcare environment is wasting time, goodwill, and previous work done by the people who come to them. They’re putting themselves on the opposing team.

4. I’m presuming this is the couple seen in Christchurch a few months back and for F’s sake that should never have been news to start with. It’s just cruel and mean-spirited and puerile. Leave them alone already. Haven’t their lives already been ruined enough? These are real people and they’re being made the butt of a joke for a nation, over and over and over again. Also: It’s intensely victim-blaming. Every joke of this nature claims, “Their fault, they didn’t close the curtains.” And okay, open curtains exposed them to the people nearby. But it was *other people*, including *this very joke*, that exposed them to people all over the world. So at this point, months later, the ‘joke’ is like a childish bully pulling the “Stop hitting yourself!” routine. And it’s vile.

5. I find it stomach churning, insulting and frankly quite traumatic, to see my mental illness used as a punchline. These ads are disgusting, lowest common denominator bullshit.

7. I find your trivialisation of both mental health and people’s sexuality absolutely disgusting. These are not the sorts of things that I want to see displayed as supposedly humorous – you really need to assess your sense of human decency.

8. It’s not just the mocking of bipolar, as if mental illness is automatically funny. It’s not just the assumption that “has bipolar” equals “game over” in some kind of bizarre sick relationship death match. It’s not just that dude in the stock photo who presumably wasn’t asked before his image was used with this nastiness. It’s also the casual fetishisation of bisexual orientation. In that same death match, “is bisexual” apparently equals “male partners automatically win”. It’s dehumanising, objectifying, and just plain rude.

9. I really dislike the content shown on giggle tv. These are just some examples of jokes that aren’t acceptable, especially when shown in places like doctors offices. The last thing sufferers of mental illness need to see while waiting for an appointment are insensitive “jokes” about mental illness. Not to mention a lot of the content I find quite sexist.

10. I can understand how adults might find humour in such subjects in carefully catered spaces where everyone knows the deal, and everyone knows that these things are not intended to make fun of anyone, and are just attempts to be “edgy”, as adult humour likes to be. But … G rated? On Children’s television? No. That is a very bad idea. Children can’t discern easily between edgy conceptual humour and reality yet and these forms of comedy are likely to instil in the young attitudes that lead them into measurable risk of being bigoted against these groups. If this stuff is being screened anywhere, it very much should be late night television around other insensitive stuff.

11. I have mental illnesses; disorders, differences, whatever you’d like to call them. I’m “crazy”. Sometimes I’m more like “normal” people than other times. At the moment, I’m in full-time paid employment, paying tax and “contributing to the economy”. Sometimes that’s not really feasible, and at those times I am still a citizen and a human being with exactly the same rights and worth. (More on that another day.)

12. Playing on people’s sexuality and their mental wellness is very uncool. Bipolar is often made fun of, as is bisexuality.

13. Today, I was referred to the public hospital for a completely physical issue. The thing is, when something is medically wrong with my body, I don’t suddenly stop having mental illnesses. If someone like me – “Like Minds, Like Mine”, I believe the slogan is – when mentally ill people get the flu or break an arm or have more complex things go wrong in our bodies, we shouldn’t have to sit in the waiting room in pain while garbage like Giggle TV is making fun of us.

Think about some of the reasons a person might be in hospital – as a patient, as a visitor – the stress and uncertainty they might already be dealing with – and then picture one of these pathetic little cartoons laughing, “Ha-ha! You’re different!” Maybe just imagine a schoolyard bully, because I’m sure the guy who charges a fee to make fun of us in public will have some defence about how it’s “just meant as a joke”, and it really is the kind of joke a nine-year-old might find funny. “Ha-ha! You’re not like me and I think you’re *weird*!” This sucks in any public place, but when people are sick we need medical centres to be *safe*.

Most physical illnesses are *much* cheaper and easier to treat the sooner they’re treated. If sick people avoid doctors, they risk getting sicker, developing complications, spreading disease; if they’re injured they may worsen the injury, perhaps beyond repair; they’ll skip check-ups and ignore warning signs and delay and delay and delay… Maybe it won’t even be a physical illness at all, because yes, GPs are often the primary carer for mental health, and some of the medicines that are prescribed can have really horrible withdrawal effects if the person taking them feels too ashamed and unwanted to make an appointment for a new prescription. I can’t believe I have to spell this out, but it’s a terrible idea to make fun of people with mental illnesses right in the very place they need to turn for help. A lot of the so-called “jokes” on Giggle TV are pretty mean and nasty – definitely more of them than are actually funny (maybe I’m just a snob), but these ones are actually threatening people’s health.

As I mentioned, I’ve had contact with the directors of GiggleTV before. I got nowhere.

I tried to see if there was any copyright issues here. The images and jokes are clearly taken from the internet, and no copyright or credit details are given anywhere. But it’s hard to prove who “owns” an internet joke.

So basically what we have is a situation where (in addition to private health providers) the Ministry of Health is supporting content that is clearly abusive towards people with medical issues. Ie: As well as all the mental health ones referring to people as “crazy” and minimising or making fun of mental illness.

I’m going to write to the DHB, as a first step. I’m also going to submit an OIA. If you have other ideas, please comment below.

My intention is not to shut down the service completely. I would like GiggleTV to take responsibility. I would like businesses to realise how GiggleTV might be effecting their customers. And I would like to see the sexist and offensive jokes removed.