Alphonse Daudet’s In the Land of Pain was one of the major influencing texts for How Does it Hurt?, and I can see why. The collection of raw notes, published after the author’s slow painful death by tabes dorsalis, is a harrowing insight into life on the edge of everything.

Alphonse Daudet (1840 – 1897) was a hugely popular French novelist, well-known for his humour and compassion. He contracted syphilis at the age of 17. The disease lay dormant until the early 1880s, when it developed into tabes dorsalis – literally, the wasting of the back. He would suffer increasing ataxia, paralysis, pain and disability from then on.

In the Land of Pain is the notebook he kept during this time. The intention was for the disjointed observations, experiences and records to become some sort of novel. This was never realised, and the notes stop somewhere between three years and 18 months before his death in 1987. His wife then published the notes in their original form. (I have the edited, translated version by Julian Barnes.)

The notes follow his journey, which begins with attacks of nerve pain, and become indepth descriptions of horrific symptoms and treatments. He discusses the effect of his illness on himself and those around him. In the second half of the book, he goes into great detail on his time spent in sanitariums, including many interesting, often witty and cutting, descriptions of other patients.

The text is often self-indulgent, over dramatic, and disturbingly honest, because he never expected people to read it in this form. This is what gives it its edge.

Daudet claims that “pain drives out language.” That words come “only when everything is over, when things have calmed down. They refer only to memory, and are either powerless or untruthful.” I must contradict him – as the existence of this book (and his many novels) contradict him. He was clearly able to overcome the many barriers pain places between the author and their work.

His observations of himself, his family, and other patients clearly gave him so academic distance on the situation. While the notes are often distressed, especially when he is commenting on his own decline and the effect om his family, they also appear to give him relief. Sometimes this is comic, in the form of detailing the oddities of other patients in the sanitariums he frequented. This passage is suggestive of obstinacy, hope, and playfulness.

“A group of old ataxics playing cards; picked up by old women who take them off to a distant villa. Two men on crutches returning secretively late at night by a back route.”

Daudet seemed to struggle with the urge to share his every experience, and to protect those around him. “Suffering is nothing. It’s all a matter of preventing those you love from suffering.”

“I don’t want my next book to be too harsh. Last time I felt I went too far. Poor humanity – you shouldn’t tell it everything. I shouldn’t inflict on people what I’ve endured, this painful, all too self-aware end to my life.”

At his lowest, he appeared to deeply wish that he were alone. He was known for leaping to his feet when his wife appeared, to smile and converse, only to retire, sweating and moaning, when she left. Here he imagines a conversation between two sufferers, one with a family, one without. The descriptions of treatment was, for me, more grueling than the tail of pain. Along with almost constant pills, serums, and injections, Daudet was subjected to such innovative medicine as being suspended on a chain to stretch the spine. “I am suspended in the air for four minutes, the last two solely by my jaw… Thirteen suspensions. Then I start coughing blood.” (P30)

It is no wonder he said; “You have to die so many times before you die…”

His aphorisms on suffering, which I first read in How Does It Hurt?, have stayed with me.

“Pain is always new to the sufferer, but loses its originality for those around him. Everyone will get used to it except me.” (P19)

“Pain has a life of its own. The ingenious efforts a disease makes in order to survive. People say, ‘Let nature take its course.’ But death is as much a part of nature as life. The forces of survival and destruction are at war within us and are equally matched.” (P26)

As he began to lose that war, he began to lose parts of himself. Having had to let go of so much of myself to accept my new, limited life now, I found this particularly emotional. “Farewell me, cherished me, now so hazy, so indistinct…”

However, I am only at the beginning of the journey. And I found comfort and strength in Daudet’s eloquence, dedication to writing, humour in the face of tragedy, and commitment to those around him.

“My friends, the ship is sinking. I’m going down, holed below the water-line. The flag’s still nailed to the mast, but there’s fire everywhere, even in the water. Beginning of the end. I don’t care if my cannon-fie lands shot, and the whole ship is falling apart. I’m going down fighting.” (p7) 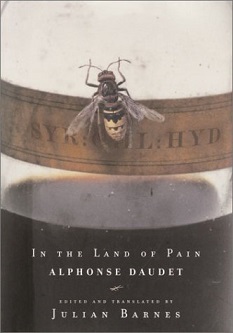