A couple of days ago, Cate Owen tweeted asking for examples of kindness people had experienced because of Twitter. She was inundated with some pretty incredible replies. 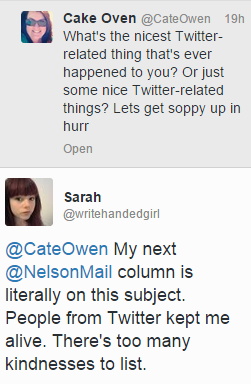 And honestly, there really is too many. I’ve written before about this – How to say Thank You When ‘Thank You’ Isn’t Enough. I ran out of the right words a long time ago – it just seems impossible to express what Twitter, this blog, and the community I have built here has done for me. (I’m trying though – as I said, my next column makes a feeble attempt).

My community has supported me physically, mentally, emotionally, and financially. They – you, probably, because you’re reading this – have given and given and given until I have no more tears of gratitude to show.

If you’ve been following my story for a while, you’ll know I was hospitalised in March 2013. It was after that that I really started using Twitter, because I was so incapacitated by my illness that it was often the only communication I had. Of course I had my family and friends, but Twitter was a constant connection to the outside world, and access to immediate support.

You may also know that, during those months, I got severely depressed. I’d always suffered from depression but it was fairly well managed. My illness rendered me incapable of doing the things I’d usually do to keep healthy – work, write, be social, exercise, eat well – and then a medication change caused the final downfall.

A few days before Christmas, I tweeted that I had had enough, and that I did not want to live any more. This is not a fair thing to do, but within seconds, I was flooded with messages, texts, and then phone calls. People from Twitter then managed to contact someone close to me and send them immediately to my house.

I’m tearing up writing this. How can I possibly express what this meant?

The following day, I was admitted to Respite. After that, things started to turn around for me.

This year, my mental and physical recovery has progressed in leaps and bounds – supported constantly by my community, my friends, and my family. I recognise my privilege – I’ve been able to access an incredible psychotherapist, gotten the right medication, and finally received the proper diagnosis for my illness which has lead to treatment and support from medical teams in Nelson. I also have amazing friends I knew long before Twitter, and a supportive family. Plus, many of my “twitter friends” have become “IRL friends.”

I recognise that a lot of this is also because of my own stubbornness. I saw the edge, and boy, it did not look pretty on the other side. I promised myself I was never going there again. I devoted myself to four things: my mental wellbeing, my emotional development, my physical health – and my writing. I’ve managed to stick to that plan.

There’s just way too many examples of the ways in which you all have supported me to do this. But I do want to share the one that happened this week, because it utterly knocked my socks off.

My beautiful friend Hayley Heartbreak is an incredibly talented artist and designed who, as far as I knew, had made two portraits for me before.

She drew this cartoon back in March when I was in the media facing down Paula Bennett over treatment of beneficiaries by Work and Income New Zealand. I honestly love everything about this – especially my facial expression. Hayley, you rock star.

She also drew this, which will make little sense to you unless you know that my nickname is Sarebear, on account of the rhymey-ness and my general bear-like disposition. (I don’t have a bear-like disposition, but I like to wear ears). I was about to host a Bear Party in Wellington. We lamented the fact I can’t drink, and also that bears the world over would not be able to because how would they get into the bottles?

Then, this week, I arrived home to a mysterious package on my bed.

Mystified, I began unwrapping its many layers.

And then, this emerged. And I promptly burst into tears. It turns out my friend Edmund had commissioned Hayley do this after I blogged about my diagnosis with Ankylosing Spondylitis.

“I was struck by your closing sentence “….now that I can see my enemy, I get to choose a sword.” Inspired by this, I asked Hayley to draw a picture for you, in the hope that not only would serve as a continuing source of inspiration for you in your battle… there will always be us who believe in you, your strength, and your bear-like ability to whip this sickness into submission.” – Your friend, Edmund.

As if this wasn’t enough to get me bawling, I then opened Hayley’s letter.

Hi Little Bird. I know you are supposed to be a bear, but birds always have the strongest voices in nature… as you can see see, Ed commissioned me to do a portrait of you. It’s how a lot us see you I think – a brave warrior who fights on no matter what is put in your way…. I hope that when you are having a difficult day and feeling like chucking everything at the wall and screaming (is that just me? haha) that you can look at this picture and remember that it is actual, physical proof that people believe in you and what you do.”

By this point I was outright sobbing – and I am again now. I don’t mind confessing that today is a bad day. It’s 3pm and I still haven’t made it out of bed. My AS is currently “in flare,” which is when my immune system decides to have a real go, and inflammation just spreads throughout my body. Symptoms include my spine feeling like it’s on fire and trying to twist itself into a noose, cramps everywhere, my stomach rejects everything, I’m constantly thirsty, the blood vessels in my eyes burst and my eyes get really dry, my fingers twist up, my knees and feet  and head ache, my pelvis feels like it’s trying to detach itself, and I’m utterly exhausted. It’s pretty much a really fun time.

Anyway, then things got really weird. I posted a picture of Warrior Sarah on Facebook, and my friend Anna commented that I now had two portraits by Hayley. I replied and said no, I have three. And she says, I meant the one I got for you for your 21st. (!!)

This is what she was referring to. Anna commissioned this for me seven years ago, as a birthday present. I still have the original print – it’s been very precious to me, as I lost that cat, Cleo, soon after. Anna never told me who the artist was – but as it turns out, it was one of Hayley’s very first commissions.

What a world. What a small, wonderful world.

And yes, on days like today, when things are tough and I start to think stupid things like “fuck this” and “why me?” I can look at Warrior Sarah, hanging directly opposite my bed, and remember that, not only am I a fighter, I have a whole army who believes in me.

And there’s no way “thank you” is ever enough.