A couple of days ago I was driving in Nelson and I saw this ad in the window of a local coffee house. Not the world’s best photo, but hopefully you get the idea.

I made a comment to the man I was with, about how sick I am of these sorts of sexualised, stereotypical, airbrushed images of women being used to sell product.

Presumably feeling personally attacked by my statement, he protested. He said “But I don’t even see the woman. I just see a coffee.” (I guess his point was to argue that she wasn’t that sexualised, because if she was, he would have noticed that. Like this is somehow a worthy counterattack to my point).

I replied: Precisely. That’s the exact problem. You are so used to this sort of image in advertising, you don’t even see the person in it, you just see the product. That’s how socialised this is. That’s how much women have been made into props in order to sell empty ideals to fish eyed consumers.

The “I don’t see it that way” argument is what makes feminism such a constant uphill battle. Responses like:

3. I’m trying to see the problem from your point of view, but I don’t see why you’re so worked up about it.

When I was in Wellington, I saw this billboard. 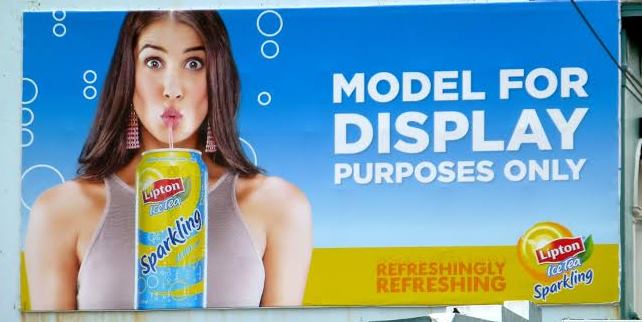 I literally stopped dead in the street in disbelief. I can just imagine the marketer’s thought process, coming up with this one. “Oooh, how edgy! How self-referential! We’re really pushing the boundaries with this one!”

NO. You are fucking not. You are enthusiastically reinforcing all the bullshit women have to deal with every day, the implicit sexualised coding that makes men shrug and say “Don’t see a problem.”

Why would anyone even think that the model was also for sale? Because that’s how advertisers represent women. At best, another product. At worst – and usually – an agreeable, pliable prop to whatever the product actually is.

Not only is this everyday sexism at its finest, every single time a woman is used like this, it recreates and strengthens the existing code of what “a woman” is and makes it even more difficult for people to live outside of that.

Take me, for example. I’m actually amused at the way some people (usually men men in the street), struggle to respond to me. I’m amused because if I don’t laugh about this I will cry.

1. I’m not an agreeable prop. The first thing they always notice about me is my short skirts and high heels. They have a coded response to this.

2. Then they see my cane. This is when I start laughing, because the actual, noticeable doubletakes make their thought process ridiculously obvious. Their first reaction is to look because I’m wearing a short skirt. Their second reaction is their response to the fact that I’m disabled. Many don’t seem to be able to compute that. It doesn’t fit the image they want. They’re uncomfortable with it. Well, sorry and – fuck you.

No, I’m not “for display purposes only” actually. I’m a real person. I’m not “for sale,” either. So next time you look at an ad for a drink (or any other foodstuff) which includes a sexualised, airbrushed woman sucking on a straw or a spoon or making an expression that simulates orgasm (believe me, you’ll see one today) and “don’t see the person” (sure) maybe then is when you could do a doubletake.

One Reply to “For Display Purposes Only”