Weddings are my feminist, capitalist, hates-events-and-especially-hates-planning-them Nightmare. So… why *am* I doing it?

Disclaimer so I don’t get owned: This is about my experience and <gasp> I’m aware not everyone feels the same. But for me, two and a half months out from my wedding, I’m questioning my already questionable sanity for the millionth time and definitely not googling elopement.

Right, so: apologies for the radio silence! When not buried under mountains of lace or wrangling  spreadsheets (ughh), I’m still recovering from tenosynovitis, as well as the various challenges of being ill during the silly season, which is made even sillier by my birthday falling in the middle of it.

However, most of that madness is over, and the next bit is escalating rapidly. I think I suffered premature heart failure when the calendar ticked over to three months until my wedding. And that isn’t… really… natural? Like, it’s completely normalised for brides to feel panicky, anxious, sick and exhausted but… why do we just accept that? 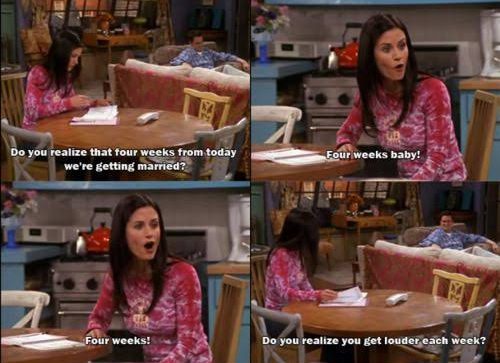 Sorry for the Friends examples, but Monica is just too much of a bridal caricature to resists – and her OCD is so familiar. Chandler’s a caricature here too; the chauvinistic ass.

To get a handle on it, let’s take a super-quick journey through time to the beginnings of this whole marriage thing.

Obviously, the concepts and practices of weddings developed differently across cultures and geographies. The use of a ring seems to be one universal element, a custom started by the ancient Romans to symbolise eternity. The left ‘ring finger’ was believed to house a vein connecting directly to the heart.

But marriage was, of course, not always about ever-lasting love, and still isn’t in many instances. It was about security of bloodlines, property and wealth.

The idea of marriage as a romantic practice developed with twelfth century troubadours, and some Pope guy also made the link not only with religion, but with legal consent. (Hmm). In the 1500s, so many weddings were taking place without witness or ceremony that the presence of an ordained person and two witnesses was decreed a requirement, which, along with saying I do and signing the papers, pretty much continues today. 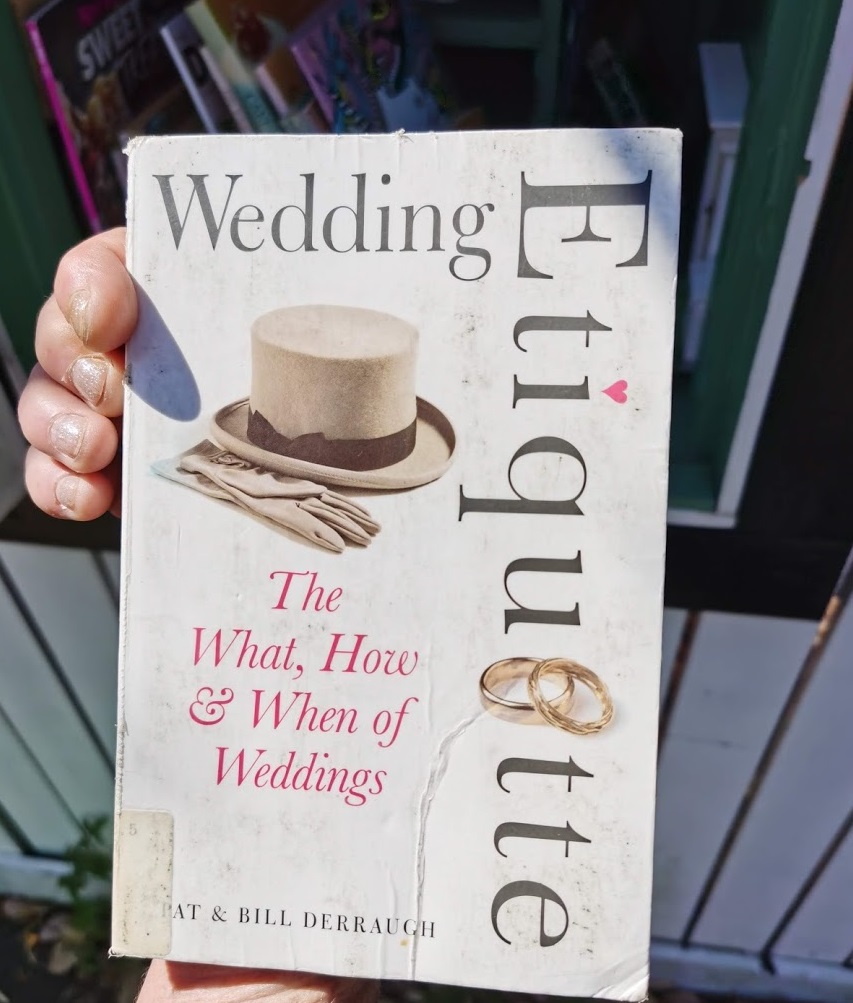 Nik and I discovered this gem in the local Little Library. It states that the father of the bride, in addition to paying for the wedding, should gift the groom at least one goat and a cask of mead. … Nik is still asking about his goat. 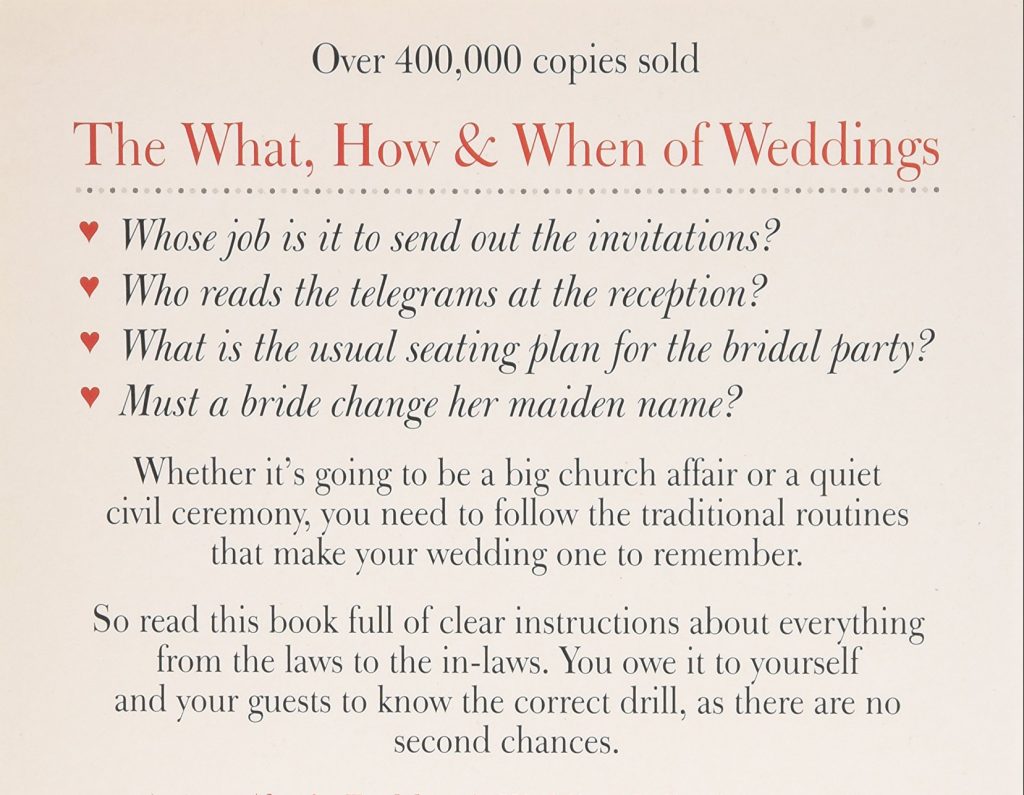 The weirdest thing about this book is that it was published in 1983, and reprinted in England in 1993 and 1998. I thought I was reading something from at least the 50s. Needless to say, it didn’t offer any useful advice.

What I’ve gleaned from unnecessary research, because obviously, is that marriage and weddings were designed and overseen by men. They are entirely a product of the patriarchy. But it’s women who bear most of the burden. So why do we want to do it?

My mother is extremely fond of informing people that I, at 4 years old, would arrive at preschool and immediately shed my clothes. This was because my favourite toy was the Dress Up Box. Oh man, did 4-year-old Sarah love that dress up box (along with stealing bags of flour and clogging the bathroom sinks trying to make playdough, but that’s a different story) – and if you didn’t get to the box first, you missed out on the best stuff. I’ll give you one guess what the ‘best stuff’ was.

My second favourite toy was the baby that had the bottle of milk that actually disappeared when you fed it. Confession: I still don’t know where the milk goes.

What does that all tell you, though? That the things I wanted to do when I was four years old were pretend to be a bride and a mother?

There is nothing wrong with being either of those things. Maybe I was also pretending to be the cook of the house when stealing the flour (probably a better excuse than enjoying the thrill of thievery).

But what sort of media was I consuming that lead me to play-acting these things, and not, I dunno, flying a plane, or building a highway in the sandpit, or <insert other cliche “masculine” boy child behaviours>?

Pretty sure we don’t need to guess here. It. Was. Disney. It was Cinderella, it was long lashes, long hair and longer dresses, it was Happily Ever After, again and again and again. 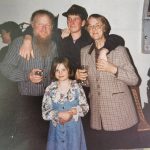 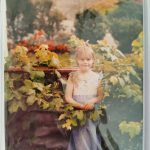 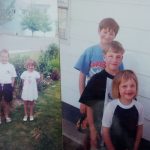 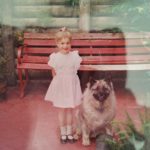 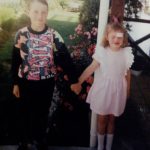 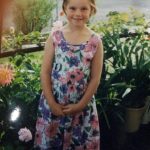 My favourite of these has to be the bottom centre. I’d been hassling my brother to play princesses with me, and he eventually go tired of it and tripped me. Of course, he didn’t expect my face to collide with our grandmother’s mahogany coffee table. I got stitches and a permanent eyebrow scar. Mum took this picture after telling us to hold hands and make up. We were standing as far apart as possible lol. (He’s one of my best friends today).

I had, I think, two ‘special occasion’ dresses. These were kept in mum’s closet in order to keep me out of them. I found Ways and Means.

I dreamed of being a princess, and the dream was inextricably linked to being a bride. I’m sure I’m not alone in this.

The socialisation and media proliferation throughout my childhood and teens continued to reinforce the ‘feminine’ goals of Love, Marriage, and the Baby Carriage. It seems like a hangover from much earlier times, when finding a suitable man to attach oneself to would be (supposedly) a guarantee of security. Though I was also very education and career-focused, I felt in some ways like the pivotal moments of my life were already mapped out for me. I went through a rebellion against the whole institution.

But denouncing marriage did not curtail my bridal fantasies. I wanted the long white dress. I wanted the roses, the bridesmaids, the music, the dancing, the cake, the absolute sparkling confectionery sugar stupid perfection of it all.

And none of that is particularly bad or wrong on its own, if it’s within your means and sustainable and for all the right reasons etc. From the last few months of wedding planning, however, I have a few key take aways.

And you know what the real kicker is? While you’re trying to plan an event that you hope will feel like That Special Day You’ve Dreamed Of because even though you’re a feminist and it’s all an ancient ‘Gotcha!’ grounded in patriarchy, you just can’t help but want the Princess Moment… while you’re doing this planning, probably for an event bigger or more emotionally complex than anything else you’ve done – you’re also supposed to represent your partner, keep your families happy, ensure the guests have a lovely experience, write runsheets, write menus, write vows – all while being. very. very. goddamn. motherfucking. calm and demure.

Because god forbid you have a moment of stress and you hear the lips of everyone in your whole life pucker as they prepare themselves to say that word. You know the one, c’mon, say it with me now.

A completely socially acceptable way to describe a bride who shows any sign of stress or frustration. I’m for sure not saying that there are not entitled jerks out there who take this as their opportunity to force everyone else to do what they want. We all know there are.

But are they entirely to blame?

I have yet to be called this wonderful portmanteau that equates a woman with a raging five hundred foot tall monster that terrorises a city, but I’m sure people have thought it. And to be honest, I’ve had my moments. Stress and anxiety make me a brat like nothing else.

But in among those moments are others, ones of clarity, compassion, joy, and love.

Because no matter what I look like in my white dress, or whether the chair bows are even, or whether the food is too cold or whether the guests thinks it’s all ‘perfect,’ or what fucking colour the cake topper is – this is the day I say I do. I do to friendship, to family, and to a my chosen future.

And hey. Consent is feminist, and feminism is for everyone.