The Feminist Agenda, the manufacturing of crisis, Fiverr and self actualisation.

Ok! If you made it through Part One of my attempts to deconstruct the idea that productivity is the only way to create self worth, you’ll know that I’ve looked at capitalism, body neutrality, and self-care, and I just got started on listening to this episode of The Feminist Agenda.

(If you’re like me and you don’t usually get into podcasts (though I have started obsessively listening to The Guilty Feminist because it’s hilarious and balm to my misandrist soul) you can read the transcript here, which is AMAZING, I wish more podcasts included these). 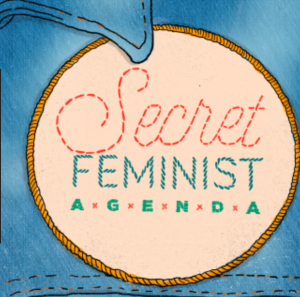 So, host Hannah McGregor talks with Cynara Geissler about being a feminist in late capitalism, and I will have to refrain from copy-pasting a bunch of it because although they say they don’t have all the answers, they really articulated some things that were exactly what I’d been thinking about.

Cynara: …. we’re encouraged to do martyr-like levels of work, but we’re not really taught that, like, work and rest are sort of separate cups, that you have to fill both of them. We kind of think like, I have to earn rest and certainly I think that and certainly I do things like, “No, you can’t go to the bathroom until you complete the end of this paragraph.” [laughter] And like, that’s really rolling the dice sometimes.

And that’s unhealthy, it’s like, am I really going to start worrying about incontinence because I need to be–I’ve placed so much self-worth in productivity? So yeah, I’ve been reading, I’ve been listening to Brené Brown. …she talks about the idea of scarcity and how scarcity is something that we kind of create for ourselves, and then we become obsessed with making decisions based on, “Well, if I don’t say yes, if I don’t do this thing, no more opportunity will come.” And she says, “What if productivity wasn’t self-worth?”

I’m no stranger to the wisdom of Brene Brown – I must have watched her famous TED talk on vulnerability at least fifteen times, I’ve watched other talks, I’ve read one of her books- but y’know, hearing this stuff and agreeing on a logical level doesn’t mean you can internalise it. I can say to myself “productivity isn’t self-worth” and I just kind of go “mm.” Like, I’m hearing it but I’m not believing it. So I think it’s probably something I just need to keep saying, whenever I can.

I also really appreciated this bit:

Cynara: …it also ties into models of ableism, right? Because you know, the ability to over-extend yourself, like that’s–it doesn’t feel like it–but it’s actually a privilege and I think it actually cultivates a culture where those are the–it shifts the expectations, right, of what is a reasonable amount of work to do. And I think, just like in terms of class warfare, we should be pushing back on that. Like, we shouldn’t want a culture where I’m on the clock 24 hours a day or I’m only as valuable as the 37 projects that I’m working on. Right?

Of course I was nodding emphatically here, because for one thing it was just so nice to be listening to a thing about feminism that acknowledged women with disabilities multiple times, and that the “Be it all, have it all, also get out and physically protest everything otherwise you’re a bad feminist” type of feminist is alienating and inaccessible to many of us.

And secondly, this was exactly the sort of thinking I’d been doing about capitalism and self-worth, as you may have read previously. They also talk about how even our leisure time has been co-opted – like you can’t just wear your pyjamas and eat a pizza and binge netflix, you’ve got to be renovating your house or contributing to the community or consuming culture in sexist, elitist and ableist ways – like doing yoga or going to twenty museums or reading classic novels.

Hannah: …many people have written about the sort of manufacturing of a permanent state of crisis. I mean, Orwell, to start. Like the idea of that governments maintain control via manufacturing permanent states of crisis, and we can see that in all kinds of ways, right? We can see it in employment, we can see it in politics, we can see it… Like, I think sometimes we were kept from more meaningful forms of political intervention via the manufacturing of constant crisis so that you can only ever react. You can’t ever act. And that state of being in a permanent condition of fight or flight panic reaction, that’s a great way to keep people if you want control over them.

Here I paused again – it’s not a new thing to me, but applying it to this negative belief system in particular I was like… This is exactly how I feel. Like I’m in constant crisis, always running out of time. And that does control my decisions and behaviour. So if I can question that, if I can say, why do I feel urgent? There’s no genuine hurry, it’s ok to slow down. Then that’s another shift in thinking. 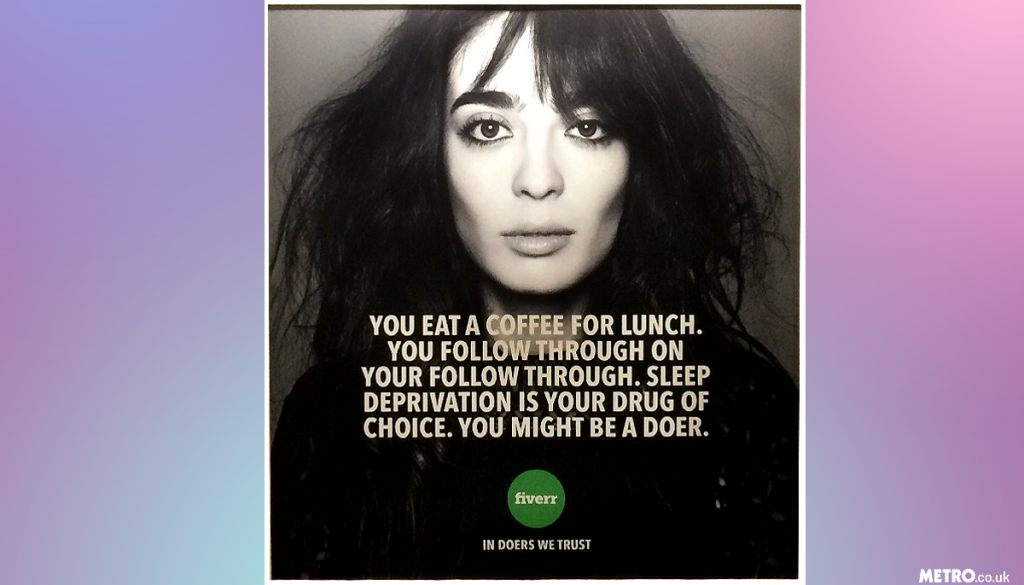 This right here is the problem.

‘How to relax’ – what do other philosophies offer?

While I was researching this piece I accidentally-on-purpose distracted myself by going on an idle hunt through my bookshelf. Imagine my surprise when this jumped out at me. 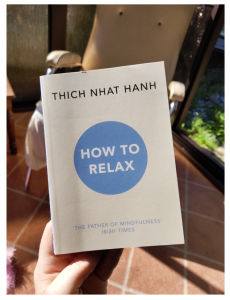 Not only did I not remember buying it, I didn’t remember reading it – and I clearly have, because it’s dog-earred all the way through (don’t do this, this is bad book behaviour). Anyway, it’s a short guide to mindfulness, which I have of course tried to practice and sometimes manage, but not enough, I guess.

I think there is so much wisdom to be found about addressing the deficits caused by capitalism in non-Western philosophies. I feel like that’s a thing on it’s own and I don’t think I’m the best qualified to talk about it, other than to maybe encourage myself to do some more reading. And maybe try to not forget the things I’ve already read.

Right at the top of the old Hierarchy of Needs is self-actualisation, which is in the dictionary as ‘the realization or fulfilment of one’s talents and potentialities.’ That’s sliiightly different from the definition here, which uses the verb achieve rather than realize. 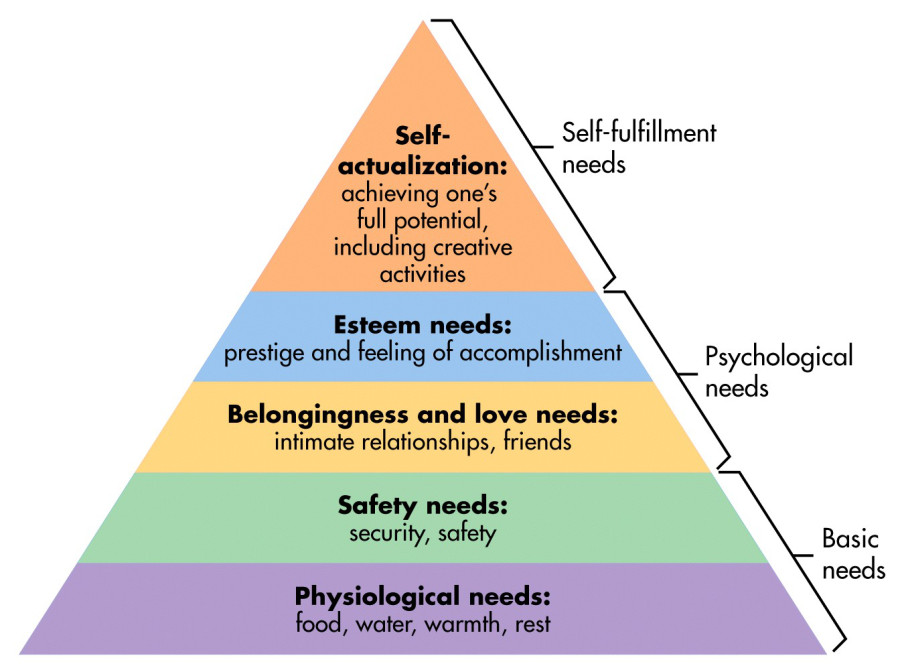 The idea, as developed by psychologist Abraham Maslow, is that the needs lower down in the hierarchy must be satisfied before people can attend to needs higher up.

Maslow stated that human motivation is based on people seeking fulfillment and change through personal growth. Self-actualized people are those who are fulfilled and doing all they’re capable of.

My question would be, can you fulfill all of your needs without being “productive”? Can you be creative and realise potential without constantly achieving things, especially things which have primarily capitalist value?

I would really like the answer to be yes, but there’s a few sticking points. Obviously, you need some way to take care of your basic needs – some sort of income or support. And just for myself personally, I don’t think I would feel accomplished or like I was realising my potential if I didn’t achieve anything. So then I would ask, is self-actualisation the same as self-worth?

I don’t know the answer to that. For me, they have been, so I’ve really come full circle back to my initial struggle and impetus for the post, which is – how do I value myself when I’m too sick to achieve things? I think the first thing is trying to make changes to my language, in all the ways I’ve explored.

Thank you for coming on the journey with me! I hope that these posts have provided something useful, at the very least food for thought, as the research has done for me.

Now it’s time for a rest…

One Reply to “Productivity ≠ Worth Part Two”