One of the reasons I love National Poetry Day is that poets, by nature, are often shy skittish creatures who can most often be found in metaphorical mossy holes, muttering to themselves, scrabbling at pages and hissing at passersby.

But this is the one day when we all crawl out into the sunlight. And it is beautiful.

Maybe I just speak for myself, but the truth remains that poetry isn’t often centre stage. Often I feel like a born again, thrusting thin volumes into my friend’s arms enthusiastically, promising that these words will help them find the light.

But on National Poetry Day, we become a country joined together in appreciation of the written and spoken word. For those of us mossy-hole-hissing types, the thought of having to stand up in front of people and actually say the words we’ve hunched over for months may be terrifying, but it’s also exhilarating.

This year, I’m focusing on women’s voices, and the particular ways that poetry can be of use to women. I want to amplify women in this space, one that has been dominated by men for too long.

I recently wrote an essay about Bryan Walpert’s book Poetry and Mindfulness, which aims to provide once defence for the studying and writing of poems in the modern age. While enrolment in the arts continues to fall, there is clearly still public support for them. Poetry is, however, probably one of the most difficult to defend – if we should even have to. There’s certainly no obvious economic return, when a book of poetry that may take several years to compose sells for $25. But there is most definitely a spiritual one. Poetry is emotional currency. It is its own power.

Previously I’ve written about the political nature of poetry, and poetry as an act of protest. While that second post is a little dated in terms of how I express myself, the ideas are more important than ever. I’d been given the book The Poetry Of Protest, which discusses the power of poetry as a tool for the voices of marginalised people.

“Poetry is by nature subversive…an ideal medium for confronting injustice, inequality, and indifference.”

Furthermore, it states that “the act of writing is in itself a protest,” and that protest is sometimes “only possible through the limited exploitation of a piece of paper and a pencil.”

I think this is a vital point, because, for many, poetry has only ever been an elitist experience. The friends who’ve been on the receiving end of my enthusiastic book-thrusting often respond “I just don’t get poetry, though. There’s nothing in here for me.” While I have to respect that, my feeling is that they just haven’t met the right poet. And I don’t think our basic school curriculum does much to encourage engagement in contemporary poetry. We get taught classic works that of course have much merit, but are often inaccessible. And so that forms many people’s understanding of what poetry is. We get nowhere by locking people out with complexity. I’m not saying all things should appeal to all people, but it is important to demonstrate that poetry is for everyone. Even things that feel too complex for us today were rarely meant to be the sole dominion of the aristocracy. Shakespeare was bawdy af and attended enthusiastically by the working classes.

And if poetry, therefore, is for poor voices as much as anyone, it stands to reason that it can be a tool for fighting, for standing up and being heard, for expressing the experiences of marginalised communities. Women are not neccessarily poor, but we are often marginalised. This is a way of using sometimes limited capacity and sending strong, important messages about our lived experience.

I think the first National Poetry Day I actively took part in, that I remember, was not long after I got sick. I wasn’t able to do much except lay on the couch at that point, but I did manage to compose a poem. I think it contained an homage to a certain old white man poet who I am no longer enamored with. In any case, I recorded it and shared it on Twitter. And I read some poems in bed, and that was my participation. It was enough.

Some women poets to read!

Four years ago I went to the event at Page and Blackmore in Nelson. The microphone was open for anyone to share their favourite poem. Another old white man whose name I can’t recall was memorable only for the fact that he got up and said that while he understood we were supposed to be reading other people’s poems, he had decided we were going to love this one he’d written himself.

I am entirely certain we did not.

If my memory is correct, I read Anne Kennedy’s I was a Feminist In the Eighties.

Stella Chrysostomou, the then manager of Page and Blackmore (now co-owner of Volume) then announced the winners of that year’s competition, which I think was to write a recipe poem that wasn’t really a recipe. I got second place with a poem about salmon (that was not about salmon), so got up again to read it. Good thing I had my walking stick that day to help my knees from knocking together. The boy I went with stole all the old ladies’ (and some of the men’s, I’m sure) hearts by reciting Jabberwocky from memory. I was duly impressed. I didn’t confess to him til this year that I don’t even like Jabberwocky.

In 2015 I was back at Page and Blackmore, having been invited as part of the lineup for the year. I was at that point studying poetry at the IIML, and read some of the poems I was working on for my portfolio. The one that proved to amuse was one I’d written while under the influence of Zopiclone, of which I believe the final line is simple “Cake. Cake. Cake.” I’m very dubious it has any actual literary merit. (Incidentally, another one written the same way has been selected as part of an installation in the upcoming Nelson Arts Festival, so the message I’m getting is I should definitely do more drugs).

This year I’m in Auckland and, health permitting, am going to Time Out bookstore in Mount Eden for All Tomorrow’s Poets. I’m excited to go to an event in a city venue, and because my friend Tayi Tibble is reading. I wrote about Tayi’s new book not long ago. She was in my IIML class and the book is excellent. 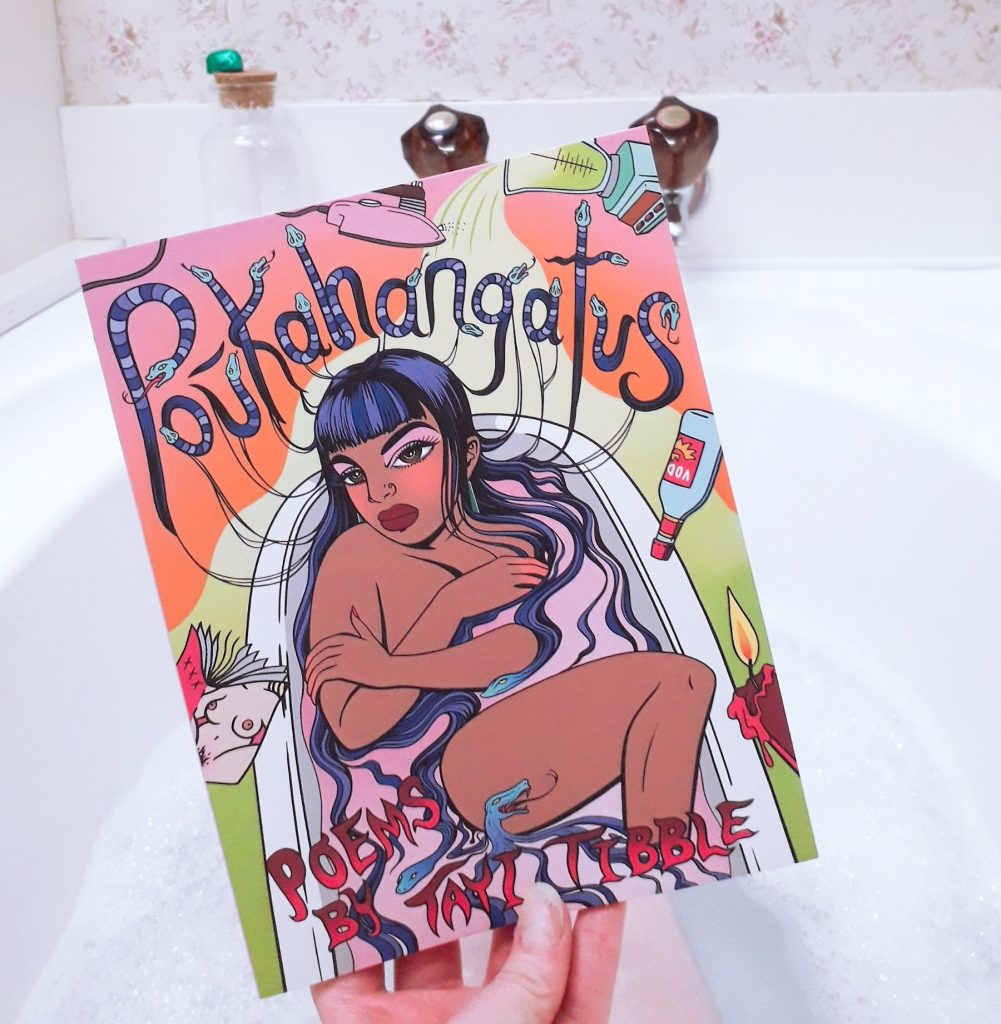 I had a plan to record some work to share but I’m not well enough, and doubt I will make it out later. Instead I will share this and then possibly some other poems by women, as I am trying to amplify women’s voices in a space that has been dominated far too long by men, at least in a white colonial context.

Wherever you are and whatever you do, take a moment. Read or listen to a woman.

There is power in that alone.