Someone I was speaking to recently described themselves as “allergic to mindfulness” – And I thought god yes, me too. But I was wrong.

Upon further reflection, I realised that what I’m actually “allergic” to is the commodification of mindfulness. The way it, like many other Eastern practices, has been co-opted as a catch-all answer for any modern ill.

It must seem worse than bizarre to people who have been doing these things for centuries, to see Western culture “discover” them and start forking over half their paycheques for Lululemon yoga pants and a chance at inner peace.

Rumya Putcha, who’s an Assistant Professor at Texas A&M University, has spent over a decade conducting ethnography in yoga studios in the US.

Her article Yoga and the Maintenance of White Womanhood, explores, in particular, the co-opting of the word namaste. A literal translation of namaste might be “I bow to you,” and this gesture often accompanies it at the beginning or conclusion of a yoga class. Of course, it has a richer spiritual meaning, which I have had explained to me as each party recognising the divine spirit within the other. Either way, it’s a ritual of respect.

Rumya uses the treatment of namaste within the culture of white women doing yoga as a means of expressing how the practice has been commodified, and how disrespected she’s felt in these spaces.

What “Cultural Appropriation” Misses
Too often the conversation about cultural flows across color lines devolves into a useless debate about appropriation versus appreciation, a reductive rhetoric that misses the point when people of color are not only replaced, but also rendered invisible. There is no dearth of guides and how-tos in cyberspace that define cultural appropriation with a negative connotation—as the “selecting of certain aspects of a culture, ignoring their original significance, for the purpose of belittling it as a trend.” Appreciation, on the other hand, is positioned as the superior choice, since it involves “honoring and respecting another culture and its practices, as a way to gain knowledge and understanding.”

What these definitions miss entirely is that “culture” is not something material that exists separate from actual human beings. Quite the opposite, the social mechanism by which a culture becomes appropriated relies on a simple truth—that Whiteness, and White womanhood in particular, need constant care and feeding to survive.

The rabid commercialization of words like “namaste” provides a perfect case-in-point for how this system operates. A quick Google search of “namaste,” for example, pulls up a host of bizarre, but rampant mistranslations as well as a range of gendered lifestyle products, from jewelry and t-shirts that read “Namastay in Bed” to a Canadian television show called “Namaste Yoga,” featuring mostly White and light-skinned women doing yoga in beautiful locations in the woods or on a beach at sunset.

I was glad to read this and educate myself. I’d often felt uncomfortable with the “Namastay” clothing lines, but I didn’t really understand why, apart from the fact it’s a shit pun at best. I can’t imagine what it’s like when it’s a piece of your culture that’s been abused for the sake of that. 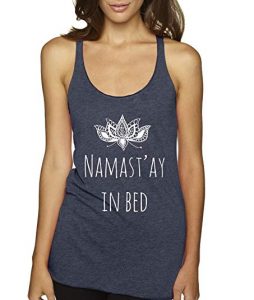 My antipathy towards yoga, meditation and mindfulness is nothing to do with the practice itself or its origins. As I, and many other people with chronic health problems, have written about many times – when you become sick, you become the recipient of well-meaning advice from every friend, family member, coworker and passer-by who thinks they have something new to tell you. And I don’t really blame them for it – as much as my health isn’t anyone else’s business, I recognise the desire to help.

The fact that “have you tried yoga?” is a running (but painful) joke that is instantly recognised by any chronic illness community I’ve ever been part of should tell you something. Yoga is It. It’s the Cure. If you’re too tired to exercise, you can still do yoga, right? Too sore? But this is just gentle! Yoga’s the way forward.

I find yoga beneficial – I actually feel like I’m betraying other sick people by saying that! But I do. However, there’s also big accessibility barriers – financial, physical, mental, emotional. And just because it might help some tired muscles one day or soothe some nerves another: it is not ever, ever going to cure my autoimmune arthritis.

Neither is meditation or mindfulness, which brings me back to where I began. I recently read Massey University professor Bryan Walpert’s book Poetry and Mindfulness: Interruption to a Journey, which was fascinating (because I’m a huge nerd). In response to the declining enrolment in the humanities, Walpert makes a defense for the study and writing of poetry, as a way into the practice of mindfulness. He separates meditation for the purposes of the book, which I think is probably quite useful for a lot of Western readers. If you ask someone to sit down and be calm and silent, even for ten minutes a day, they’ll probably resist you – I know I do. I can’t stand the thought of it, and believe me I’ve tried. I even paid $19 a month for an app that made me anxious every time I just caught a glimpse of the icon on my phone. Probably the opposite of what you’re wanting, really.

However, mindfulness – the act of paying attention to the present moment – is an easier ask, for me at least. Yes, the present moment is often defined by physical pain, and that does make me want to distract, to do things that get me outside my body. But the present moment is also nearly always free of anxiety. My anxiety is about the future, a lot of my negative feelings are weighted to the past. If I pull my mind into myself, whereever I may be – at the supermarket, at work, in bed – I can, sometimes, shut down those destructive thoughts. Not always, because I’m not God or Wonder Woman – whoever you believe is better – but sometimes.

It is also important to note that mindfulness, just like yoga, is not going to cure my pain. I have had many, many people tell me that paying attention to the pain is the way to manage it. I’m sure you can imagine why this makes me want to scream.

It is also unlikely to cure my anxiety. I don’t want to say it won’t, because I do, for all my cynicism, believe in the power of hope, and honestly – what’s the opposite of that? To just say “Cool, my brain’s broken, that’s how it’s always going to be for the rest of my life”? No, I’d rather not. I think if you all know anything about me by now, it’s that I’m not a quitter.

(When I was a kid, my aunt had this kind of terrifying poster on her wall, of a heron-like bird trying to swallow a frog. The frog had it’s webby fingers wrapped around the bird’s neck. Even though it was half eaten, it wasn’t going down without a fight. My dad used to point to it and say “See that, Sarah? That’s our family motto. Never ever ever give up.” I’m not sure this was the best way to impart this lesson to a seven-year-old <cry-laugh emoji> but I guess it stuck).

So. I am allergic of the commodified idea of mindfulness, to the perception that it is the same as or must be done in conjunction with meditation, and to the idea that it will somehow cure my arthritis.

“We could talk about poetry as a rope in a storm. Poetry as one continuous mantra of mental health. Poetry as the world’s biggest, longest-running workshop on how to love.

…That the poem “keeps the heart awake to truth and beauty” (Coleridge again – who can resist those Romantics?). That the poem is an intervention: “The capacity to make change in existing conditions” (Muriel Rukeyser). That poetry, said Seamus Heaney, is “strong enough to help”.

In Walpert’s book, he uses the study and creation of poems as examples of ways to be in the moment, even when the moment is painful. Mindfulness isn’t about needing everything to be calm or forcing yourself to be so. It’s about being able to be present despite things not being calm at all.

And yes. I’m aware of the irony of me beginning a post bagging Westerners for acting like we’re the first people to ever have this knowledge. I know I am far from the first.

I’m just finding ways to keep my hands around the throat of life. Even if that means I have to be aware of what it’s like to feel half swallowed.