Except I do, of course. And I bought this one because of three things: the title, the cover, and the recommendation. I didn’t know anything about it.

We Are Never Meeting In Real Life was on a list of recommendations by Roxane Gay, who calls it “As close to perfect as an essay collection can get.”

I make a habit of not doing any research before I read a book, which sometimes is a good thing and sometimes blows up in my face. In this case, it worked out. 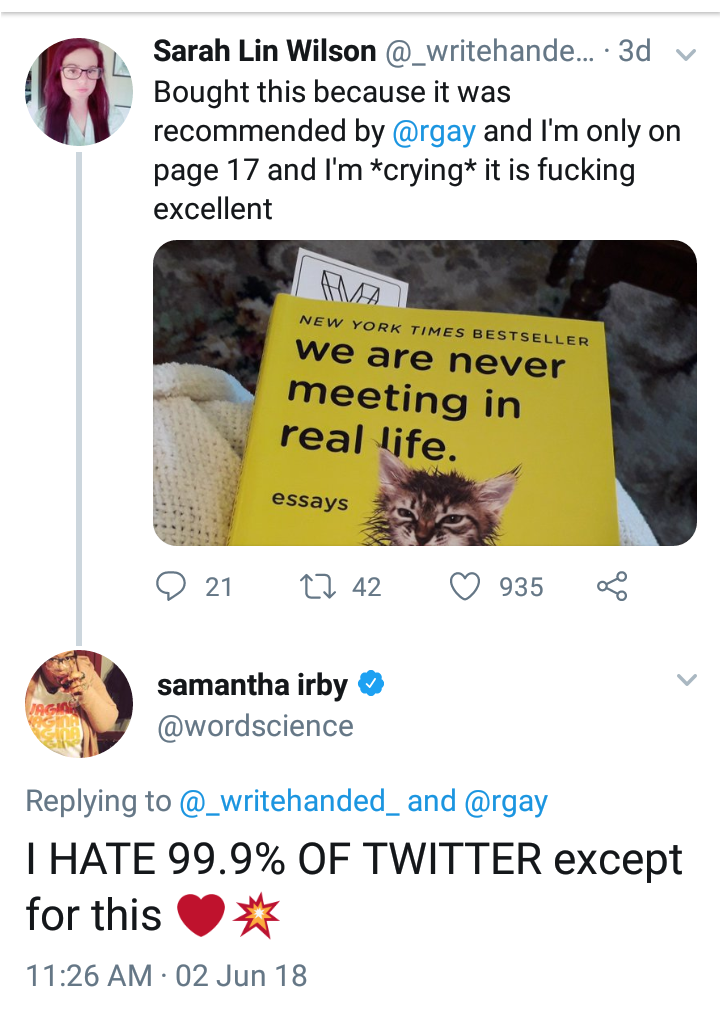 I had a moment of  complete meltdown when this happened. Roxane Gay retweeted me, Samantha replied, and I made a long low keening noise for approximately two and a half hours.

And at that point I was only seventeen pages in!

It kind of goes without saying that the book is hilarious. It tackles really difficult topics – poverty, abuse, health, being black in America, being queer. But it does so with such sharp wit, humour, self-awareness, and intelligence, that you feel incredibly engaged even when it’s tough. She never shoves you in a hole and leaves you there. It’s more like “Yo, check out this hole, it’s pretty shit, eh, lol.”

One such hole is her physical health. Again, as I said, I didn’t know anything about her, but in the third or second chapter, she starts to give information about various symptoms. And then it comes out – one of her diagnoses is arthritis.

I sat back in shock. I hardly read anything mainstream about someone with arthritis, and when I do, I will have sought it out. So to come across it in this way, almost as a footnote, was important for two reasons.

I particularly enjoyed her take on relationships, including such gems as:

“But I’m going to need you to love me on the bus, dude. And first thing in the morning. Also, when I’m drunk and refuse to shut up about getting McNuggets from the drive-thru. When I fall asleep in the middle of that movie you paid extra to see in IMAX. When I wear the flowered robe I got at Walmart and the sweatpants I made into sweatshorts to bed. When I am blasting “More and More” by Blood Sweat & Tears at seven on a Sunday morning while cleaning the kitchen and fucking up your mom’s frittata recipe. When I bring a half dozen gross, mangled kittens home to foster for a few nights and they shit everywhere and pee on your side of the bed. When I go “grocery shopping” and come back with only a bag of Fritos and five pounds of pork tenderloin. When I’m sick and stumbling around the crib with half a roll of toilet paper shoved in each nostril. When I beg you fourteen times to read something I’ve written, then get mad when you tell me what you don’t like about it and I call you an uneducated idiot piece of shit. Lovebird city.”

The final titular essay – We Are Never Meeting In Real Life – served an equal amount of truth and hyperbole and left me in hysterics. When she describes the anxiety induced by voice mails – “I’m depressed, man! Please don’t ever leave me a voice mail! Lexapro has yet to cure the existentialist horror that is modern telecommunications,” I felt like I had never related to anyone more. Which is, I guess, how a lot of people feel and why the book as done so well. The chapter, which boils down to “I’m funny on the internet, please don’t ever actually talk to me,” is exactly how I feel. Not that I’m funny. But I’m ok at the words thing when I can write them down. When I have to speak them, I suck.

Real Life, man. That shit’s Not For Beginners.